Christians Attacked in Sudan after Incitement by Mosque Leaders in Khartoum

One South Sudanese dead, another in critical condition, sources say. 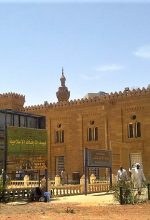 At the end of evening prayers at a mosque in the Al-Jerif East area, on the eastern bank of the Blue Nile River in Khartoum’s East Nile Locality, imams on June 6 called for residents to rid Christian South Sudanese from the “Muslim area,” a source who requested anonymity told Morning Star News. Attacks on Christians in the area followed that evening and the next day.

In a separate attack on Saturday (June 20) in Omdurman, across the Nile River west of Khartoum, young Muslim men shouting the jihadist slogan “Allah Akbar [God is greater]” stabbed a Christian to death in a street assault on him and four other South Sudanese in the Shigla area, said another source on condition of anonymity.

Mariel Bang is survived by his wife and four children ranging in age from 1 to 4 years old, the source said. Bang was 35.

Besides the death of Bang, he added, the attack left one of the other South Sudanese Christians in critical condition. The other three Christians assaulted were women who sustained minor injuries, he said.

“We will burn this place,” one of the assailants said, according to the source.

Khartoum Attacks
After the June 6 call by imams in Khartoum’s Al-Jerif East to rid the area of South Sudanese, three young Muslim men with rods, sticks and rifles subsequently beat two Christians as they left an area market, said another source. Seriously injured was Ariere Sathor, 18, he said.

“The attack left one of the two Christians [Sathor] in critical condition after sustaining injuries on his head,” the source said. “The Muslims who consider the area Muslim territory were shouting, ‘They [South Sudanese] must leave this place by force.’”

The mosque leaders told those at the evening prayer that the South Sudanese were infidels, criminals and brewers of alcohol, which is forbidden in Islam, he said.

The next day, June 7, mobs of young Muslim men sent South Sudanese refugees fleeing for their lives as they set fire to 16 make-shift shelters of plastic sheeting where the refugees were living in the Al-Jerif East area, according to the source.

“The youths said they didn’t want to see them in a Muslim area,” the source told Morning Star News.

In the attack, 10 South Sudanese Roman Catholics in the area were injured, including a woman, Achoul Deng, he said. Among others injured were Deng Akuiek, 25; Deng Amoul, 18; Malieng Dengdid; Gwot Amoul; and Garang Arou Yien.

“This issue is disturbing us,” she said, “and it is not acceptable – but what can we do, oh God?”

Following the attacks on June 6-7, Muslims self-styled as the Resistance Committees of Al-Jerif East (Hai-Gerief Shriq) took to social media to explain why they attacked and burned the tents of the South Sudanese refugees. In their Facebook statement, they criticized police for not arresting the Christians for unspecified crimes.

“We blame the police force in this message for not being available in time of need,” the statement reads.

The attacks came amid hopes that persecution of Christians would decline under the new transitional government.

After Omar al-Bashir was deposed as president in April 2019, the government sworn in on Sept. 8, 2019 led by Prime Minister Abdalla Hamdok, an economist, was tasked with governing during a transition period of 39 months. It faces the challenges of rooting out longstanding corruption and an Islamist “deep state” rooted in Bashir’s 30 years of power.

Following the secession of South Sudan in 2011, Bashir had vowed to adopt a stricter version of sharia (Islamic law) and recognize only Islamic culture and the Arabic language. Church leaders said Sudanese authorities demolished or confiscated churches and limited Christian literature on the pretext that most Christians have left the country following South Sudan’s secession.

In April 2013 the then-Sudanese Minister of Guidance and Endowments announced that no new licenses would be granted for building new churches in Sudan, citing a decrease in the South Sudanese population. Sudan since 2012 had expelled foreign Christians and bulldozed church buildings. Besides raiding Christian bookstores and arresting Christians, authorities threatened to kill South Sudanese Christians who did not leave or cooperate with them in their effort to find other Christians.

After Bashir was deposed, military leaders initially formed a military council to rule the country, but further demonstrations led them to accept a transitional government of civilians and military figures, with a predominantly civilian government to be democratically elected in three years. Christians were expected to have greater voice under the new administration.

In light of advances in religious freedom since Bashir was ousted in April, the U.S. State Department announced on Dec. 20 that Sudan had been removed from the list of Countries of Particular Concern (CPC) that engage in or tolerate “systematic, ongoing and egregious violations of religious freedom” and was upgraded to a watch list.

Sudan had been designated a CPC by the U.S. State Department since 1999.

Sudan ranked 7th on Christian support organization Open Doors’ 2020 World Watch List of the countries where it is most difficult to be a Christian.