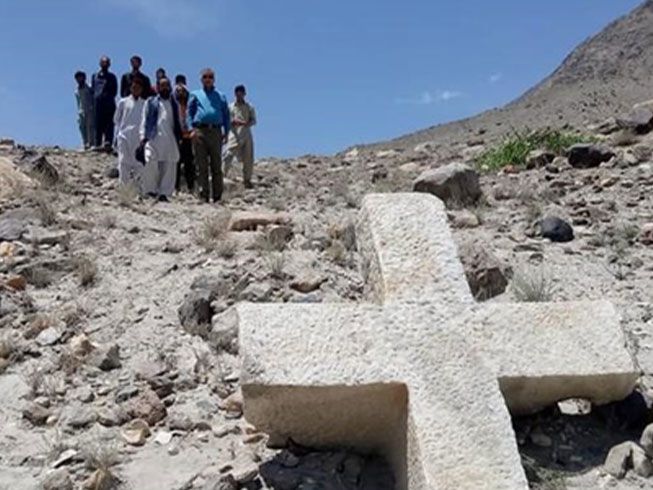 An ancient marble cross, thought to be as much as 1,200 years old, has been discovered in the foothills of the Karakoram mountain range in the heart of the Himalayas, providing evidence for Christianity’s early arrival in northern Pakistan from the Middle East.

The huge marble "Kavardo Cross", discovered in the Himalayan foothills, means Christian communities were present in northern Pakistan since the early middle ages

Three University of Baltistan researchers, led by vice-chancellor Muhammad Khan, and local mountaineers found the ancient 2.1 by 1.8 m cross near their basecamp in the predominantly-Muslim region bordering with China, Afghanistan and India. The “Kavardo Cross” is thought to be the largest discovered in the subcontinent and is estimated to weigh around four tonnes.

“Praise the Lord, this makes me very joyful,” was the reaction of one Pakistani Christian leader. “It will be a great encouragement to Christians in Pakistan to show that our faith was here many, many generations ago, before Islam came. This is amazing news! I am looking forward to what the research outcome will reveal about Christianity in Pakistan,” he said.

Initial estimates place the cross between 1,000 and 1,200 years old. The University of Baltistan plans to continue the research in partnership with European and North American institutions, and local historians, to determine its precise age. If accurate, the dating would confirm the ancient presence of Christianity in the Himalayan region, where Christians are today a marginalised and persecuted minority.

The location, near the village of Kavardo, was once on the “Silk Road” trade route that linked China and Pakistan. The research team noted that the way the cross has been carved is similar to traditional Buddhist carving, suggesting that the Christians who made it may have been converts. This area of what is now northern Pakistan used to have both Buddhist and Christian communities long ago.

According to Byzantine history expert, Béatrice Caseau, the cross is evidence that merchants from the Middle East brought Christianity to this mountainous region. The Sorbonne historian added, "Even if we lack the sources to know with certainty where they passed, we know that Christians from the Persian world, using the Syriac language, came to the Indus region between the fifth and eighth centuries, until the arrival of Islam.” Traces of Christians from the Ancient Church of the East, dating from the seventh century, have been found in China and cultural exchanges, including religion, would have taken place throughout the region.