Radical Hindutva nationalists who disrupted a prayer meeting at a church in Karnataka state, India on Sunday, November 28, say they will stage another attack if the meeting takes place again.

At least 15 members of the Hindutva group Bajrang Dal attempted to barge into the church in Belur, Hassan district, where more than 40 Christians were engaged in prayer, claiming that forced religious conversions were taking place. 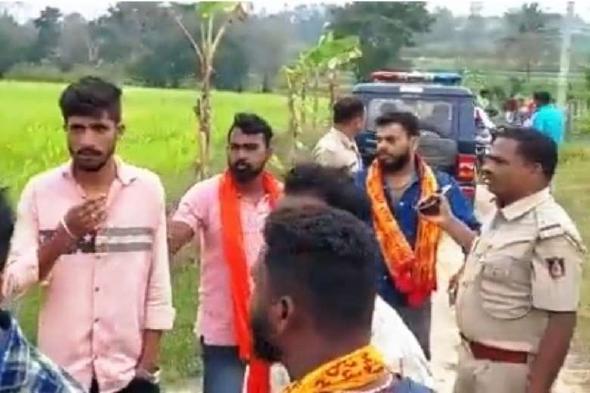 Police talk to members of the Bajrang Dal mob, some wearing saffron-coloured scarfs, outside the church in Belur

Raghu Sakaleshpura, regional coordinator of Bajrang Dal, alleged that one of their activists had been “invited” to the prayer meeting. The church was “luring people to convert to Christianity through various means,” claimed Sakaleshpura.

“If the administration allows prayer next week, we will attack,” he warned.

Pastor Suresh Paul denied the allegations. “We were praying inside, nothing else,” he said, pointing out that freedom of religion is a right guaranteed under the constitution.

The pastor said it was the strategy of Hindutva radicals to disrupt worship services by sending one of their members to attend and then claim they came under pressure to convert.

The state government in Karnataka is proposing to become the 10th Indian state to enact anti-conversion legislation by introducing a law criminalizing religious conversions carried out through force, fraud or allurement.

This move has emboldened Hindutva nationalist groups and led to other attacks on prayer meetings. On Sunday, November 7, militants from the Hindutva nationalist movement Sri Ram Sena locked a pastor and at least 30 Christians into a prayer hall in Belagavi district, falsely claiming illegal conversions were being conducted.

Pastors in Madhya Pradesh state have started to document the names of Christians attending church services in order to protect themselves against false allegations of illegal religious conversions.