Church leaders in Pakistan have condemned the killing in Sialkot, Punjab of a Sri Lankan factory manager who was accused of “blasphemy”.

On December 3, Priyantha Kumara allegedly took down a poster that included the name of Muhammad, the prophet of Islam, ahead of factory renovation work.

The accusations of “blasphemy” resulted in hundreds of people gathering at the factory. The mob broke in and violently attacked Kumara, beating and torturing him to death before setting his body on fire. 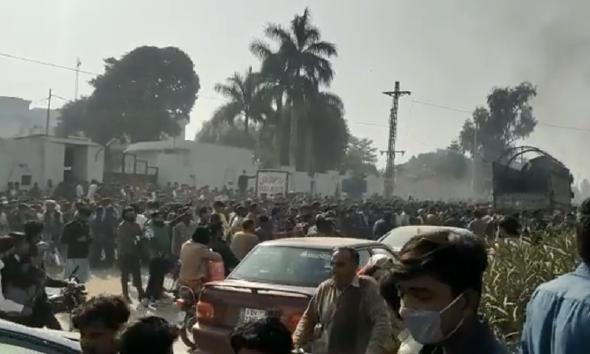 The crowd in Sialkot that gathered to attack and kill Priyantha Kumara after the Sri Lankan was accused of “blasphemy” [Image credit: Dawn]

While it remains unconfirmed whether Kumara was a Christian, the incident vividly demonstrates the risks faced by Christians and other religious minorities in Pakistan.

The case has similarities to that of Christian staff nurse Maryam Lal in Faisalabad, who in April 2021 was accused of removing a sticker that contained a Quranic text. Lal was attacked and cut with a knife before police rescued her and another Christian nurse from an angry mob.

“We are feeling helpless in front of ignorant and religious fanatics,” said Akmal Bhatti, a Christian and chairman of Minorities Alliance Pakistan. “The survival of Pakistan depends on making its citizens humane and peaceful,” he added.

Misuse of “Blasphemy” Law Must be Prevented

“Kumara was killed in front of police and fire fighters who were afraid of the mob,” said Iqbal Masih, the pastor of a church in Sialkot.

“We need to start a movement to change the ‘blasphemy’ law and prevent its misuse,” he explained. “The victim doesn’t get a chance to explain his position.”

In May 2021, Khalid Rashid Asi, a church minister in Faisalabad, argued that it is “impossible” to abolish “blasphemy” laws, suggesting instead that the authorities must focus on preventing “misuse”.

One suggestion for the modification of the “blasphemy” laws is the adoption of the sharia (Islamic law) principle of qazaf. Used in relation to accusations of adultery (zina), the qazaf principle is that false accusations should be punished almost as severely as the crime itself.

Adoption of this principle in relation to “blasphemy” would mean that false accusations could result in fines or imprisonment.

Pakistan’s notorious “blasphemy” laws (Section 295 of the Pakistan Penal Code) are often used to make false accusations in order to settle personal grudges. Christians are especially vulnerable, as simply stating their beliefs can be construed as “blasphemy” and lower courts usually favor the testimony of Muslims, in accordance with sharia.