Christians Questioned in Criminal Investigation of Church in Vietnam

Attorney says intent must be shown for violation of law.

By Our Vietnam Correspondent 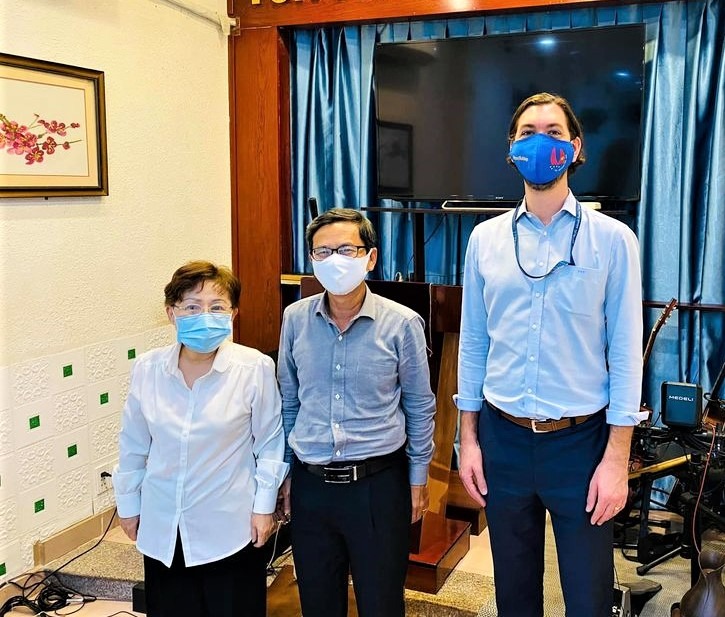 Police in Go Vap District questioned the Rev. Vo Xuan Loan and her husband, the Rev. Phuong Van Tan of Revival Ekklesia Mission church, at the police investigation bureau on Oct. 14, after 11 REM members had been interrogated, according to multiple sources.

Authorities also intended to “interview” two congregation children, ages 11 and 13, but strong objections to the questioning had at least delayed it, a source said.

In what Christian leaders believe was an effort to defame evangelicals when COVID-19 infections were traced to the church in May, REM leaders were widely chastised and shamed in government-controlled media as authorities began prosecuting the church under the Vietnam criminal code’s Article 240 against “spreading a dangerous contagious disease to cause harm.”

Neither the government nor the REM leaders have commented at length on last month’s interrogations, but on Oct. 20 attorney Dang Dinh Manh made arguments in a brief to the investigation office petitioning for the dismissal of all charges.

Two of the three subpoints of Article 240 indicate that intent to spread a contagious disease must be shown for violation of the law, according to the brief, obtained by Morning Star News. Suffering from COVID-19 themselves when the government revealed plans to prosecute, church members contended there was no logic in singling them out as they were victims of the outbreak along with hundreds of thousands of others.

Article 240’s third subpoint makes it a crime to disobey quarantine rules and disease reporting requirements. The church leaders and members maintain they were scrupulously keeping the COVID-19 rules of the time.

Lawyer Manh, in a post on online media outlet Tieng Dan (Voice of the People), cited an ancient legal axiom of “invisible lawlessness,” meaning where no crime has been committed there can be no criminal charges. He maintained that REM members did not break any of the government’s COVID-19 regulations of March 3, 2020, against breaking or evading quarantine rules and failing to report infections.

Noting that high officials have publicly admitted that health authorities did not know in late May about the high contagion of the COVID-19 Delta variant, the attorney asked how church members could be expected to have taken extraordinary measures. Manh also asked exactly who the government would indict, as it has been impossible to ascertain who and how the first church member was infected.

The arguments of the attorney’s brief were also posted on Luat Khoa, a religious human rights website, and other places.

The COVID-19 outbreak in Vietnam’s devasting fourth wave was at first blamed on the REM in the last days of May when some 60 people who tested positive for the highly contagious Delta variant were connected to the house church. After the government recorded no deaths on June 1, the seriousness of the fourth wave became evident as daily deaths reached 804 on Sept. 1. Thankfully, by Nov. 1, the daily deaths had fallen to 64.

After the REM outbreak, furor grew in mainstream and social media from misleading reports about a couple who attended a May 26 meeting of the REM, an independent, charismatic house-church organization headquartered in Ho Chi Minh City, and then went to the Gia Dinh General Hospital feeling unwell. At that time only seven people were present at the church meeting, well below the 20-person limit the government had imposed the last two weeks of May, according to Pastor Loan. By then the church had gone mostly online.

A barrage of attacks in the state media followed, falsely tracing a significant outbreak to the church’s pastor and family.

The outbreak was quickly surpassed by much larger ones that infected hundreds of thousands. Centered in Ho Chi Minh City, the outbreaks attracted the full attention of the government as they took more than 22,000 lives, among them at least six pastors and 70 Protestants, by mid-October.

Christians had hoped the spikes in cases would create some perspective and take the attention off the REM church, but the government’s plan to prosecute was not forgotten.

In an unusual show of support for the REM church, on Oct. 21 the U.S. Consul of Ho Chi Minh City, Geatan W. Damberg-Ott, paid a visit to the church and home of pastors Loan and Tan. The consul inquired after their health and the well-being of their church considering the events of late May, according to a Facebook post by Pastor Loan.

She quoted the U. S. consul as saying in parting, “We are very honored to meet you two pastors, to hear you and engage in conversation this morning. On behalf of the U.S. Consulate, I wish you good health and sincerely hope that you and your congregation will overcome every hardship in the days ahead.”

Vietnamese evangelicals were heartened by the international attention given to the REM case, hoping it would spur Vietnam’s authorities to carefully consider their decisions. But they also feared that it is difficult for an authoritarian state to admit a legal miscalculation where law is used as a political tool.

Some Christians said they hope for a face-saving solution such as the church being be fined for an administrative COVID-19 rule infraction rather a criminal conviction.

Vietnam ranked 19th on Christian support organization Open Doors’ 2021 World Watch List of the 50 countries where it is most difficult to be a Christian.