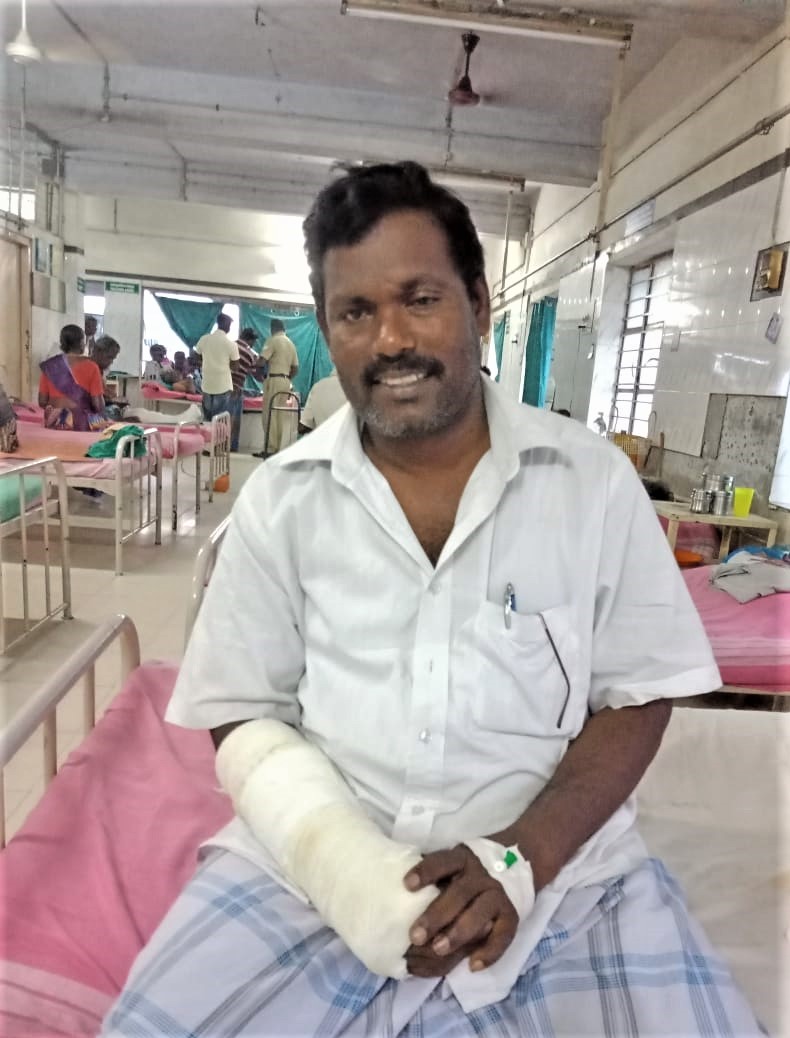 HYDERABAD, India, June 28, 2018 (Morning Star News) – Falsely accused of running a brothel, a badly beaten pastor in Tamil Nadu state jumped out of a moving car to save himself from Hindu extremists who were threatening to kill him.

The hard-line Hindu mob had attacked pastor Jayaseelan Natarajan on June 20 as he and his son visited their church construction site in the Thozilpettai area, Karur District, in the state in southern India, the 50-year-old pastor told Morning Star News.

“We are facing lot of opposition from people who don’t want a church in the area,” he said.

Leader of a house church in the Thozilpettai area for 28 years, Pastor Natarajan purchased the land for the church building in 2012, but area residents have blocked its completion.

“Since the past six years they are resisting the construction work,” Pastor Natarajan said. “They would dump garbage and animal waste on the church site. It was nasty, and always doubled the work as we had clear the mess and restart the work again.”

When he politely requested they refrain from throwing waste on the site, the Hindu villagers “picked a huge fight,” he said. “After many clashes, just recently, we resumed the construction work. At present only 20 percent of the work remains.”

On the evening of June 18, his 27-year-old son, Samuel, went to water plants on the church premises. The pastor said a liquor shop owner affiliated with the Hindu extremist Rashtriya Swayamsevak Sangh (RSS), identified only as Kumar, told his son to come out of the building and asked, “Who is the woman you brought here?”

“Samuel explained to him that he had only come to water the plants, and that there was nobody,” Pastor Natarajan said. “Kumar kept watch on him and sent a group of men inside the building to look for the woman.”

The group returned saying they had found no woman there, he said, adding, “Kumar said he would kill me and my son.”

They left but returned two days later to try to secretly monitor the site.

“Kumar saw us and blew whistles, and immediately a mob of 20 barged inside the compound,” the pastor said. “We asked what was wrong and why they were entering the premises. They paid no heed, picked up flower pots and smashed them.”

The mob struck his son with wooden sticks, but then he was able to flee as the mob turned on the pastor.

“They chased me and beat me badly,” Pastor Natarajan said.

Bleeding, he called for an ambulance, but Kumar and his gang kept it away, telling the driver, “Nobody is injured here,” he said.

“I walked limping and bleeding around the street and pleaded for the ambulance to stop and told the driver that I was the one who called, but he told me he is only supposed to pick up people from the point/address they mention, and that he can’t pick me up,” Pastor Natarajan said.

He had walked some distance when one of Kumar’s colleagues, an attorney identified only as Gobi, began following him.

“He first hit me and then forcefully pulled me inside his car,” he said. “He ordered the driver to take us to a desolate place and said that I should be killed at that spot. By God’s grace, after traveling about a kilometer or so, there was a traffic circle and speed breakers on the road, and the driver slowed down the car. I quietly loosened the car’s door to my side and jumped out quickly.”

After Pastor Natarajan fell onto the road, Gobi got out of the car, held him by the collar and took him to the police station a few yards away, he said.

The church leader called an attorney friend who urged police to get him medical care, as his hand was broken. Officers sent him to a nearby government hospital.

The next day an officer identified as Vel Murugan from the Pasupathipalayam police station came to record his statement, but the officer refused to record how Gobi had forced him into the car and threatened to kill him, he said.

“He simply wrote a short note that Kumar and a mob of 15-20 miscreants have attacked,” Pastor Natarajan said. “When I inquired why he did not want to take my complaint against Gobi, he threatened me that there will be a counter-complaint against me if he took down Gobi’s name.”

“It has been a week, and no action has been taken against the attackers, Kumar and his gang,” attorney Ranjendran Ramasamy told Morning Star News. “Police refused to register an FIR [First Information Report] based on Pastor Natarajan’s complaint. This shows how politically powerful the attackers are, that even police can’t name them in an FIR.”

Hostilities in Tamil Nadu
So far this year, there have been 32 cases of verified attacks on Christians in Tamil Nadu, the most in any southern state in India, according to religious freedom advocacy group Alliance Defending Freedom-India. ADF-India has recorded 114 verified incidents throughout India so far in 2018.

At another church on Aug. 6, 2017, a leader from the extremist group Hindu Munnani in Karur District warned pastor Raja Thangam that a mob would be sent to attack him if he failed to stop worship services, sources said.

The next Sunday, on Aug. 13, a mob of 20 Hindu Munnani members stormed into the church service, attacked Pastor Thangam and brought him to the Kulithalai police station.

En route they stopped at a mutton shop, where the mob verbally abused the pastor and slapped his face, before they filed a complaint in an attempt to force police to file serious charges against him.

When officers refused, the Hindu extremists forced Pastor Thangam to submit in writing that he would conduct no further church services.

The hostile tone of the National Democratic Alliance government, led by the Hindu nationalist Bharatiya Janata Party, against non-Hindus, has emboldened Hindu extremists in several parts of the country to attack Christians since Prime Minister Narendra Modi took power in May 2014, religious rights advocates say.