Catholic Priest Attacked in Bethlehem after Giving Refuge to Tourists

Franciscan friar appears to be stabbed with a knife. 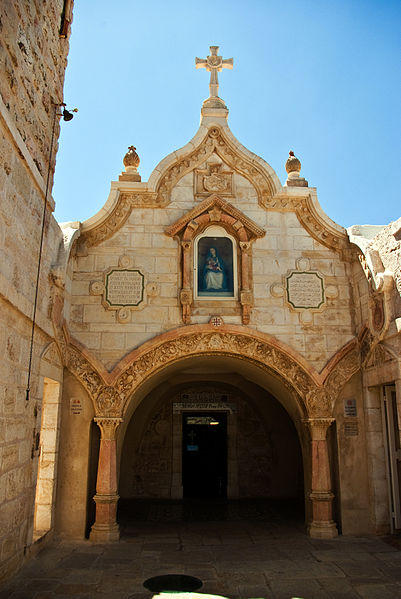 June 4, 2018 (Morning Star News) – An unidentified man in Bethlehem lunged at a Catholic priest with what appears to be a knife on Friday (June 1) in a rare attack on a clergyman in the Palestinian Territories.

At Bethlehem’s Milk Grotto, the Rev. Fadi Shallufi on Friday afternoon opened the chapel gates to foreign tourists, including women who were being harassed by two men, according to Arabic press reports. Chapel security footage shows the Franciscan friar exchanging words with the two men through the bars of the closed gates.

One of the men pulls what appears to be knife from his pocket and strikes Shallufi as the Franciscan clergyman backs away, the footage shows.

The Jerusalem Post reported that a knowledgeable source confirmed the attack on Shallufi, and that Bishop Atallah Hannah condemned it in an online statement.

“We thank God that the injury was minor, but this action is a criminal act that is far from our human, moral and national values,” Hannah said. “We reject attacks against clerics.”

Palestinian police reportedly detained two men after receiving a complaint. The source told the Post that Palestinian authorities take such incidents seriously as they can harm tourism.

About 80 to 85 percent of the West Bank population is Sunni Muslim.

The chapel receives its name from a tradition claiming the Virgin Mary spilled a drop of breast milk at the site when the young family found refuge there before fleeing to Egypt. It is a pilgrimage site in the West Bank.

The Post reported that Shallufi is from Nazareth and has been an outspoken proponent of Muslim-Christian coexistence in the area.

The security video of the assault spread on social media, with Robert Nicholson, founder and executive director of the Philos Project tweeting, “This is what Palestinian Christians really have to deal with.”