Christian Soldier in Egypt Shot in another Mysterious Military Death

Accidental misfire cited, but doctor says bullet entered in back.

By Our Cairo Correspondent 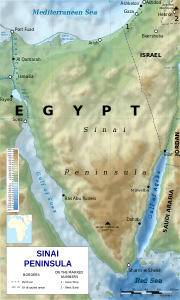 The family of Mikhail Farahat Saad received notice from the army on April 22 that their son had died in a military camp in North Sinai Governorate, near El Arish, reported Al Karma TV. He was 22.

When his body last week was transported to the southern Egyptian town of Qusiya, where his family lives, his death certificate stated he died from a “gunshot wound that resulted in his death,” according to Al Karma.

At first a nurse and a soldier accompanying the body denied any knowledge of the cause of death, but later they said he died when a rifle accidentally fired while he was cleaning it, according to Al Karma.

A relative who is not a member of his immediate family told Al Karma in a live phone interview on April 23, however, that a doctor at Qusiya General Hospital who examined the body said the bullet wound entered from the back and exited from the front, shattering the jaw. The entry and exit wounds indicated someone else shot him, he said.

The relative, identified only as Yousef, told Al Karma’s Dr. Mona Roman that Saad had spent 2.5 years in the army and was not a novice in gun maintenance and cleaning safety regulations.

At this writing the army has issued no official explanation for his death.

The family is reportedly asking for an immediate investigation into the cause of death. They learned that there was a suspect in custody and that he was being interrogated, according to reports citing the Qusiya police station and the Arish police station. Authorities have released no further information.

The family had to bury Saad before further investigations or examination of the body by a coroner, due to the delayed transfer to the family of the body, which showed advanced decay, Yousef said.

Saad was the latest of several Christian soldiers to die in military camp, with the army citing “suicide” as the cause of death in most cases.

On July 19, 2017, another Coptic Christian, 22-year-old Joseph Helmy, died in a hospital near Al-Salaam. Four soldiers were reportedly arrested on suspicions of beating him to death.

Other Coptic Christians who have died for their faith while serving in the Egyptian military include Michael Gamel Mansour. On Feb. 17, 2016, the Egyptian military informed his family that the 22-year-old conscript from Assuit had committed suicide. Authorities claimed Mansour, who was assigned to a unit that guards El Gomhoreya Stadium in Cairo, shot himself with a rifle.

Family members have said Mansour was not dealing with any major problems and gave no signs that he was having any sort of psychological episode, and no suicide letter has been found. Mansour had been scheduled to be discharged from army service on July 1, 2016.

On Nov. 20, 2015, the military informed Nataay Boushra that his son, Private First Class Bishoy Nataay Boushra, a second-year conscript soldier in the Egyptian army, was dead, also a victim of suicide. Boushra, 21, served in the Central Security Forces (CSF), a ubiquitous, 450,000-man unit under the command of the Ministry of Interior used to augment the Egyptian National Police.

According to the military, Boushra was found dead the morning of Nov. 20, 2015 in the bathroom of a military jail cell with a sheet wrapped around his neck. Officials told Nataay Boushra that his son hung himself from a windowsill.

Nataay Boushra rejects the government’s claim of suicide. His son was deeply spiritual and considered suicide to be a grave sin. During his army service, he was in regular contact with his family and gave no indication of any depression before his death. He was just three months away from being discharged from the army and pursuing his lifelong dream of becoming a monk.

As with the case of Mansour, the military made its ruling that the cause of Boushra’s death was a suicide before an autopsy was performed. At the morgue, the family refused to take the remains until officials conducted an autopsy, but while waiting, Nataay Boushra and his brother were able to examine the body. In addition to the ligature marks expected from a hanging or strangling death, Boushra’s torso was covered with bruises and huge welts from what appeared to be sustained, brutal beatings.

For months before his death, according to his father, Boushra endured threats, violence, intense verbal abuse and public humiliation from a fellow draftee, a Muslim known to the public only as “Mustafa.” Boushra took the abuse in stride until Nov. 4, when the Muslim soldier launched into yet another tirade against Christianity. Boushra picked up a stick the size of an ax handle and hit the other soldier in the head, knocking him to the ground, according to military court testimony.

The soldier was taken to a hospital for examination and then released. Both men were arrested and placed together in a jail cell awaiting a hearing in a military court. For reasons still unknown, another soldier who was a friend of Mustafa was later locked in the military prison cell with Boushra and Mustafa, the same cell in which he was later found dead, according to the military.

In August 2015, a Muslim soldier reportedly shot Coptic Christian Bahaa Karam, in Marsa Matruh, Matrouh Governorate, during a religious dispute. He was 22.

In July 2015, the army reported Abraam Girgis, 21, died after receiving multiple injuries at his post at the Central Security unit in Cairo. In June 2015, Bahaa Silvanus 23, was said to have committed suicide, but relatives denied the claim.

The army claimed Abou al-Khair, 22, committed suicide in August 2013. In September 2006, Girgis Youssef, 20, died from a “sudden drop in blood pressure,” according to the army, but relatives said they found injuries consistent with torture on his body.

In August 2006, the body of Hany Nasrallah, 21, was found in the Nile River in Upper Egypt with signs of torture.

Egypt was ranked 17th on Christian support organization Open Doors’ 2018 World Watch List of the countries where it is most difficult to be a Christian.