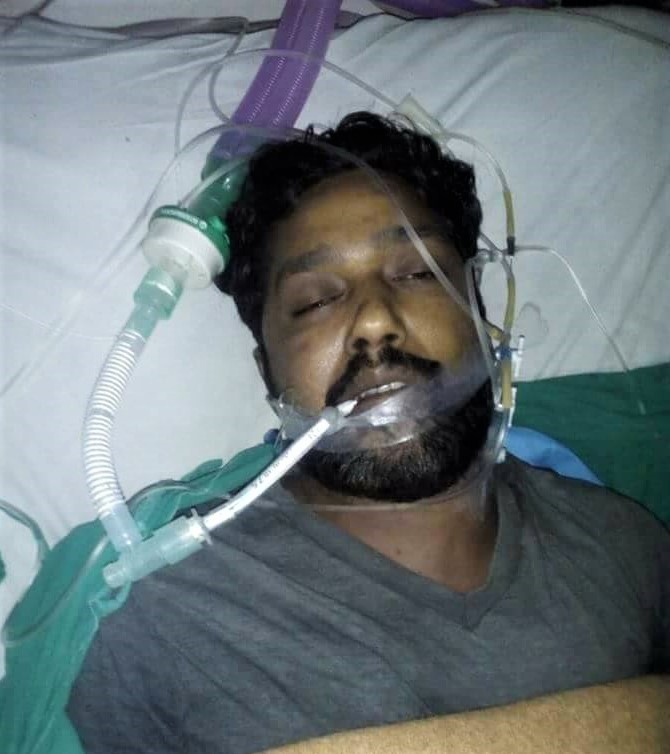 LAHORE, Pakistan, March 28, 2018 (Morning Star News) – Medical staff and security guards at a major government hospital in Lahore, Pakistan on Monday (March 26) killed a Christian father of four and injured five members of his family, including the pregnant sister he had brought because she was in labor, sources said.

Anil Saleem said that he, his brother Sunil Saleem and other relatives had taken their pregnant sister Kiran Kashif to the emergency labor ward of the Government Services Institute of Medical Sciences (commonly known as Services Hospital), because she was suffering labor pains.

“Kiran went to the doctor on duty, Dr. Saira, who was playing with her cell phone while sipping on tea,” Anil Saleem said. “Dr. Saira told Kiran to wait outside until she finished her tea. We waited for some time, but since Kiran was experiencing severe pain, she again went inside the ward to request for immediate attention.”

As soon as the woman in labor approached Dr. Saira, she started cursing her for not waiting and told a nurse to attend her, he said.

“When my sister protested against the rude behavior, the doctor started slapping her, throwing her on the floor,” Anil Saleem said. “She asked my sister how dare a Chuhri [a derogatory term for Christians] question her order?”

On hearing the commotion, Anil Saleem, his brother, brother-in-law Kashif Ashiq and cousins Raza Guddu and Kashif Robin entered the ward, but as soon as she saw them, Dr. Saira shouted to the other doctors and security guards to lock the ward’s doors from the inside and “teach these Christians a lesson,” Anil Saleem said.

“Around 15 to 20 paramedical staff and security guards and eight to 10 young doctors, including Dr. Salman, Dr. Irfan, Dr. Hasan and Dr. Sahi lunged at us with iron rods, chairs, leather belts and other things and started beating us,” he said. “Sunil, a police constable in the National Highway and Motorway Police, tried his best to placate the assailants but they continued to beat him mercilessly, kicking and punching him in the groin and chest until he fell unconscious.”

Anil Saleem and the three other men tried to defend themselves, but they were greatly outnumbered and were saved only when police arrived, he said.

He said that the doctors also beat the crew of a local news channel who happened to be in the hospital at that time; published reports indicate the altercation spilled into the hospital corridor, which they caught on film.

After a delay in treatment, Sunil Saleem died for lack of timely emergency medical assistance, he said.

“Most of the doctors fled after the incident, while those who were present paid no attention to our cries to help our dying brother,” Anil Saleem told Morning Star News.

Sunil Saleem leaves behind his wife and four children, the eldest son 10 and the youngest barely 3 months old.

Anil Saleem, who works for the state-owned Sui Northern Gas Pipeline Company Limited as a staff attendant, said that although police registered a First Information Report (FIR No. 163/18) under sections related to murder and violent rioting, they have not arrested any of those named in the killing.

“The police called us to the station today for conducting our medical examination but we refused to go with them as they wanted to take us to the same hospital where we had been subjected to torture and also lost our brother,” Anil Saleem said. “Moreover, we have registered a murder case against the doctors and other staff members, so how could the police even think that the hospital staff will treat us fairly?”

Services Hospital Medical Superintendent Dr. Amiruddin told Morning Star News that the doctors were “innocent” as the family had attacked them first. He said a security guard, Dilbar Nawaz, was injured in the altercation.

“I can’t say anything for sure, but I’ve been told that the patient’s family started the quarrel after they were told to wait,” he said.

The hospital administration has filed an application for a counter-FIR against the family for violent rioting and injuries to medical staff. Hospital officials claim that the conflict arose because doctors refused to carry out a C-section on the sister of Anil Saleem.

Anil Saleem denied this version, reiterating that the violence grew out of Dr. Saira’s unprofessional remarks. He also denied that family members had injured anyone seriously, though he acknowledged they acted in self defense.

The Young Doctors Association has issued a threat to the Punjab government that it will call a strike in all government hospitals across the province if police do not withdraw the FIR registered against the hospital staff within two days.

Rights activists suspect the government will use the police to pressure the impoverished family into reaching an out-of-court agreement with the accused doctors.

Punjab Province officials released a press statement saying that Chief Minister Shehbaz Sharif had taken notice of the matter and ordered authorities to arrest those involved in the rioting and murder. Despite the chief minister’s orders, no arrest was made at this writing.

Sunil Saleem’s sister, Kashif, had yet to give birth at this writing.

“We had barely overcome the Sajid Masih incident, and now we have got this lynching inside a government hospital,” said Christian rights activist Napolean Qayyum. “It pains to say this, but the Pakistani government has failed to make this country safe for its minority communities, especially Christians. The government showed no interest in investigating the federal officers involved in the inhumane torture on Sajid Masih and Patras Masih, so I don’t think there’s any hope for justice for the Christians in this case as well.”

Shunila Ruth, a lawmaker with the the opposition Pakistan Tehreek-e-Insaf (PTI), echoed the sentiment.

“It’s shocking that even doctors, who are supposedly educated and have taken an oath to save lives regardless of caste, color or faith, have resorted to such acts of religious intolerance and violence,” she said, adding that had the state showed some courage against religious persecution of minorities in the name of blasphemy, the situation could have been different.

Ruth said that the Punjab government was directly responsible for the crime and should therefore compensate the family.

“All those involved in the incident should be arrested immediately, specially the lady doctor who provoked the attack on the Christians, and the state itself should guarantee punishment for each one of them,” she said.

“I am still trying to digest the fact that doctors took the life of an innocent man,” Solomon said. “What hope can one have for justice to the family if police have been unable to arrest even one of the accused?”

He added that the crime shows that an anti-Christian narrative propagated by such ultra-extremist, Islamist clerics as Khadim Hussain Rizvi of the Tehreek-e-Labbaik Ya Rasool Allah (TLYR) is gradually gaining traction among Muslims, who make up more than 96 percent of Pakistan’s population.

“Rizvi and other mullahs continue to spew hatred publicly against Christians and Ahmadis, but what is the government doing about it?” he said. “Nothing, absolutely nothing.”

Pakistan is ranked fifth on Christian support organization Open Doors’ 2018 Word Watch List of the countries where it is most difficult to be a Christian.