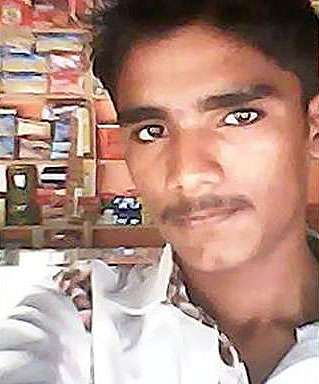 LAHORE, Pakistan, September 8, 2017 (Morning Star News) – The father of a 17-year-old Christian who was killed in a school in Pakistan by at least one Muslim classmate said the attack was religiously motivated, a charge that police dispute.

Ilyasab Masih told Morning Star News by phone from his home in Chak 461 village, Vehari District in Punjab Province, that a teacher had set sent a strong nonverbal message of anti-Christian hostility by hitting and humiliating his son, Sharoon Masih, the day before the assault on Aug. 27.

“His teacher, Nazeer Mohal, sent him back home because he was not wearing the proper uniform,” Masih said. “His mother told me later that evening that Sharoon had told her that the teacher had hit him in front of the whole class and also called him a Chuhra  [a derogatory word for Pakistani Christians], among other curse words. She said that he was quite upset at being humiliated in front of the whole class on the very first day of school.”

Sharoon was the only Christian in the class. Masih, a Pentecostal Christian, told Sharoon that he would buy him a new school uniform.

“Sharoon went to school wearing his new uniform,” he said. “Hardly a few hours later, a Muslim neighbor whose son studies in the same school told us that Sharoon had been killed in school.”

Family members rushed to the school, where they were told that some boys had taken Sharoon to a hospital, but that he was already dead.

“I cannot express the agony I went through when I saw my son’s dead body lying motionlessly on the hospital stretcher, his new blue shirt covered in dirt and blood,” Masih said.

At the hospital, classmates of Sharoon told family members that Muslim student Ahmed Raza started a fight with Sharoon because the Christian had drunk water from a glass used by all students – an act Muslims may hold in disdain as they regard Christians as “unclean.”

“We were at that time told that Ahmed had objected to Sharoon’s use of the glass, resulting in a fight between the two,” Masih said. “The teacher was not present in the classroom during that time, but some students did try to break up the fight.”

The effort to separate the two boys gave Sharoon a chance to run from the classroom, but Ahmed was said to have chased him and viciously punched and kicked him, Masih said.

“It was probably then that he kicked him fatally in the abdomen or the chest,” Masih said, adding that it was yet unclear whether other boys had joined the assault.

Human rights activist Jibran Nasir has asserted on social media that two other boys are being “protected.”

Masih said he was surprised that no member of the school staff was at the hospital when the family arrived.

The students who said that Ahmed had become aggressive over Masih drinking out of the glass changed their statements, so Masih decided not to mention it in the First Information Report (FIR) he filed at the Model Town Police Station in Burewala on Aug. 30, he said.

“We have always had very cordial relations with Muslims of our area, and I did not want to make any allegation that could not be backed up by evidence or testimonies of witnesses,” he said. “It was also said that Sharoon and Ahmed started fighting after Ahmed blocked my son’s way when he was about to go out of the classroom.”

“No one stepped forward to confirm the claim that the fight had started over drinking water from the glass,” Masih said. “We can do nothing but look to God for justice.”

Police told Morning Star News that Ahmed was in custody and had confessed to involuntary manslaughter, but that the killing was not religiously motivated.

“Ahmed Raza claims that the fight started after Sharoon inadvertently stepped on his mobile phone that was in his schoolbag,” said Sub-Inspector Mian Kashif, the investigating officer in the case. “He says that he did not mean to kill Sharoon, and that his death was an accident.”

Kashif said the police had taken statements from the entire class, sub-staff and faculty of the school, and that no one had corroborated the family’s assertion that the fight was a result of religious prejudice.

“The accused will be sent to jail on judicial remand in a day, and he will be prosecuted in accordance with the law,” he said.

The police official said that Ahmed claimed no other student was involved in the assault, but that at the family’s request police have made note of involvement of an “unidentified person.”

District education officials have suspended the head teacher of the school. School officials declined to comment on the case in spite of repeated attempts by Morning Star News to obtain a statement.

Masih said his son, the eldest of six children, was new to the school.

“He had passed his Class 8 exam from the government school in the village, but since it’s not a high school, we had to admit him to a public school in the city,” he said.

Masih works at a local wood-cutting factory on a meager salary. He had had high hopes that Sharoon would earn more, he said, as he was a hard-working student and eager to pursue higher education.