Pakistan (MNN) — While Christians across the globe spent last weekend rejoicing in Christ’s resurrection, Christians in Lahore, Pakistan* were once again targets of a terrorist attack. 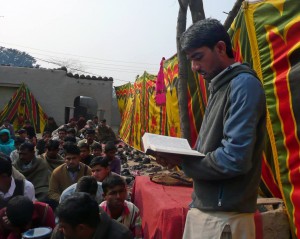 “Easter is, we’ll say, a pivotal time or strategic time for militants planning attacks because they know Christians are out and about. They’re gathered in large numbers and in churches. So apparently there was going to be another attack this Easter,” FMI’s Bruce Allen explains.

“The good news is that security forces foiled this major terrorist attack on Saturday, hours before Easter celebration.”

Thankfully, Pakistani security forces raided the terrorists just in time to stop them from carrying out their bloody execution. The couple planning the attack, Ali Tariq and his wife Naureen Laghari, planned for a suicide bombing.

However, during the raid, Tariq was killed. Four soldiers and two cops were also injured. Laghari was taken into custody where she admitted to her crime, the suicide bombing plan, and that the Islamic State had provided her and her husband with two suicide jackets along with four grenades and bullets.

What could have been a day of mourning and heartbreak was prevented. Yet, the raid on these terrorists does not mean Christians are safe in the area. Pakistan has been stepping up efforts to combat terrorism in the country.

“They know that terrorism inside the country is a major issue. It’s a major issue for Pakistan’s allies. The bomb that the U.S. just dropped on Afghanistan, Pakistan’s neighbor, was just miles from the Pakistan-Afghani border,” Allen explains.

Still, the thwarted terror attack did help some Christians breathe a sigh of relief, even if that relief is only temporary. After all, Pakistan has developed a pattern of raiding high numbers of terrorists only after an attack on a school, hospital, or somewhere similar has taken place. 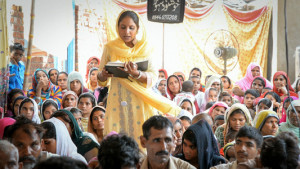 Reading the Bible for all to hear in Pakistan. (Photo courtesy of FMI)

Furthermore, one foiled attack on the Christian community in Pakistan does not mean there aren’t more planned. As Allen describes it, catching terrorists is almost like playing the game Whack-A-Mole. As soon as one is caught, another pops up somewhere else.

On top of this, Christians are often targeted for attacks, because in a way, they’re easy targets. Pakistani Christians are generally poor, being a minority in their country, and have little-to-no defenses or security at their churches. They simply can’t afford it.

Not to mention, a lot of terrorists target those who are not of the same mindset or religious view. And that includes Christians, who are considered ‘infidels.’

So please, will you continue to pray for your Christian brothers and sisters in Pakistan?

Another way to help Pakistani Christians is by donating to FMI’s “Tangible Resources” fund to help provide Snapshot** tools to pastors, church planters, and congregations.

To learn more about FMI’s work in Pakistan, click here!

*Pakistan is listed at number four on Open Doors USA’s World Watch List (WWL). The WWL is a ranking of the 50 countries where Christian persecution is most severe.

**The Snapshot tool helps Christians evangelize by helping jump start conversations, encouraging Christians to listen to others and to build relationships through which the Gospel can be shared. Learn more about the tool here!