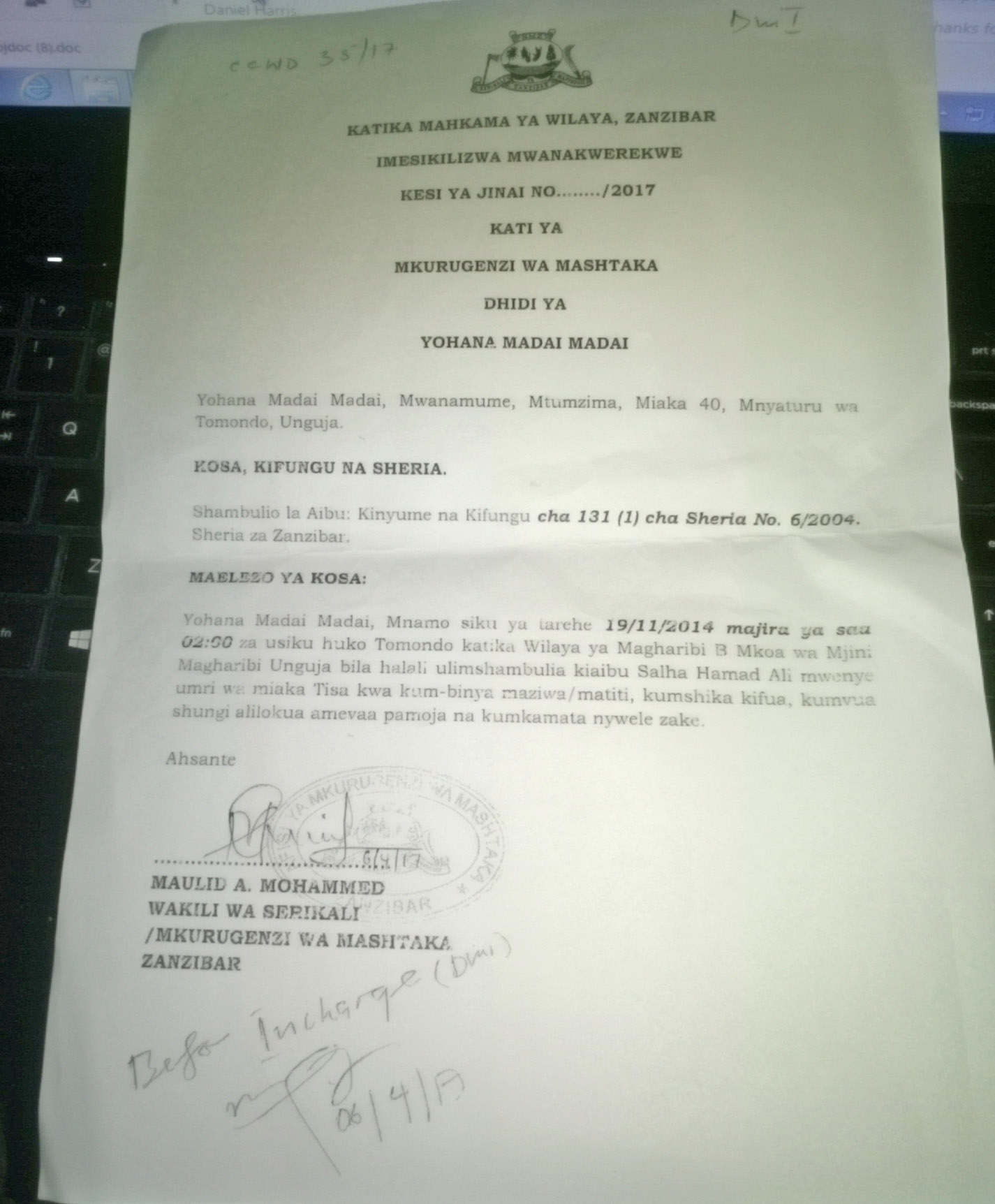 NAIROBI, Kenya, April 11, 2017 (Morning Star News) – Muslims in Zanzibar have re-opened a child abuse case dismissed more than two years ago as a pretext for jailing a pastor on the semi-autonomous island off the coast of Tanzania, church leaders said.

Police in November 2014 had closed the case against pastor Yohana Madai of the Free Pentecostal Church of Tanzania in Tomondo village, near Zanzibar Town, due to lack of evidence and witnesses, according to the Pastors Alliance of Zanzibar.

The case stemmed from an incident on Nov. 10, 2014, when Salha Hamad Ali, a 9-year-old girl on the predominantly Muslim island of Zanzibar, pounded on the door of Pastor Madai’s church building one evening with the aim of disrupting the worship within, according to the alliance.

“The pastor saw her through the window, so he came out of the church building quickly and caught hold of her and took her to local government leaders, in order to give a warning,” said an alliance leader who requested anonymity.

Village leaders met with the pastor and the girl’s mother, Gladness Mohamed Ngaa, and resolved the issue, the alliance leader said. The following day, however, Ngaa went to police to file a charge of child abuse, saying the pastor had touched Salha’s breast and removed her veil, he said. A conviction could carry a sentence of 30 years.

Police summoned Pastor Madai for a statement, but when he arrived, the officer in charge jailed him without taking a statement or listening to anything he said, according to the alliance. The next day leaders from his church registered a complaint about his incarceration, and he was released on the condition that he report back to the police station.

When Pastor Madai reported back to the station a few days later, according to the alliance, the officer in charge told him that investigations had turned up no evidence of wrongdoing and no witnesses, and that the case was closed.

When that officer was transferred to the Tanzania mainland earlier this year, however, the mother – now accompanied by a sheikh (Islamic teacher) and other Muslims – filed the charges against him again in Zanzibar, the alliance leader said.

The pastor was summoned for a court hearing in Mwanakwerekwe, on the outskirts of Zanzibar Town, on the child abuse charges in early March, but again the accuser was unable to produce any evidence or witnesses, he said. Two other hearings with the same outcome took place, and the judge dismissed the charges at the third hearing on Thursday (April 6).

The pastor was ordered set free, but when the case was dismissed, one of the Muslims accompanying Ngaa rushed out to meet with his associates and police officers waiting outside the courtroom, the alliance leader said. As Pastor Madai left the courtroom, they promptly arrested him on unspecified charges.

“This was something that had been planned,” the alliance leader said. “We are questioning the manner in which the pastor was hurriedly arrested.”

His case has been transferred from the first court of law to a district court, according to the alliance. The pastor remains in jail in Kilimani, outside Zanzibar Town.

“The leaders of the Pastors Alliance of Zanzibar went there on Friday [April 7] to question officials and struggled much to help Pastor Madai be released, but we found that it was a religious matter with the purpose of persecuting the Christians,” the leader said. “We were not given a hearing. Those handling the case are all Muslims.”

Christians find it difficult to receive a fair court hearing in Zanzibar, where several land cases are pending, he added. Pastor Amos Lukanula of the Pentecostal Assemblies of God has been battling area Muslims in court since 2007, when they issued a court-ordered stop to his church erecting a building despite having met all legal requirements to do so.

“The church is spending $100 dollars every month for the hearing of the case,” the alliance leader said. “The Muslims are waiting for the time when we shall fail to attend the court hearing, implying losing the case and subsequently paying a large, substantial amount of money.”

The alliance requests financial and legal assistance, as well as prayers, for pastor Madai, who leads a 70-member church, he said.

“They have started with Pastor Madai, and tomorrow they will arrest another,” he said. “So we ask brothers and sisters in Christ for financial support in order to engage a lawyer who can stand with the pastor, because if the case is manipulated, pastor Madai will be sentenced to not less the 30 years in jail according to Tanzania and Zanzibar laws.”

Tanzania’s population is 34.2 percent Muslim and 54 percent Christian, according to Operation World, but the Zanzibar archipelago is more than 97 percent Muslim.