Pakistani prosecutor to Christians: ‘I’ll acquit you if you convert to Islam’ 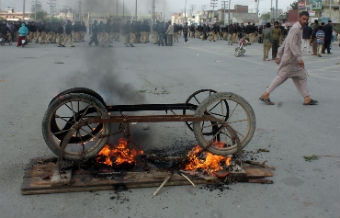 The father of one of 42 Pakistanis – who are on trial for lynching two men they suspected of the double bombing of neighbouring churches in March 2015 – has confirmed that the public prosecutor offered to acquit all the suspects if they were to convert to Islam.

Two churches in the Christian neighborhood of Youhanabad in Lahore, Punjab were simultaneously targeted by suicide bombers who tried to enter their Sunday services. The twin attacks claimed at least 17 lives, and injured 80; more deaths were prevented by volunteer church guards who tackled the bombers. Shortly after, hundreds of terrified worshippers streamed out in panic. An angry panicky crowd set upon two men already detained by the police at the scene, and lynched them to death.

In the aftermath of the bombings, the Pakistani mainstream media focused far more on the killing of the two Muslims (itself condemned by all Church leaders) than on the 97 victims of the bombers.

(A year later, last Easter Sunday, March 27, at least 70 were killed in the Gulshan Park bombing, targetted at minority Christians celebrating the festival with their children, though many Muslims also died.)

Police arrested over 500 in connection with the March 2015 lynching; of those, 84 were eventually detained on charges of murder and terrorism. Of those, 42 were acquitted in summer 2016.

Justice Sajjad Ahmed is hearing the lynching case against the remaining 42 in an Anti-Terrorism Court in Lahore. Now David Nixon, whose 37-year-old son Sunil is on trial, has confirmed to World Watch Monitor that “On March 27, when we were coming out of the court after attending the hearing, the Deputy District Public Prosecutor (DDPP) offered to acquit all 42 suspects if they converted to Islam”.

A report about this allegation was first published in a local English language newspaper, Express Tribune, and then was carried by top prime TV news channel show “Aaj Shahzeb Khanzada Kay Saath”. On the TV programme, the Special Assistant to the Chief Minister of Punjab, Malik Muhammad Ahmed Khan, said “This [offer of acquittal] is not just shameful but a heinous crime as well. The government is not in the picture because we were not informed by anyone. But a full enquiry will be conducted. We are all set to end the “extremist mindset and steer the country to a tolerant and moderate society. Therefore, we cannot tolerate anyone in the government machinery with this mindset”.

The Deputy District Public Prosecutor (DDPP) Syed Anees Shah has denied the charge, but he has been removed from office until he faces an inquiry.

According to the Express Tribune, there was a video recording of Shah offering acquittal for conversion. However, David Nixon says that Shah’s comment was made inside the court and cell phones are deposited at the entrance; hence, there is no video evidence.

Catholic Bishop Joseph Arshad of Faisalabad, who chairs a Church-related organisation, the National Commission for Justice and Peace, has condemned the pressure for conversion.

Regarding the trial, David Nixon said that, so far, only the recording of evidence has begun. “At the last hearing, a video was shown which showed the lynching. However, it was not clear who videoed that incident, as is the basic requirement of evidence in the court of law.”

Forced conversion to Islam is considered a threat to minority communities in Pakistan. Last November, in the second most populated province Sindh, its Assembly adopted a bill to curb forcible conversions, especially of young girls. But due to severe pressure from Islamic religious parties it was withdrawn in January.

In early 2016, the Pakistan National Assembly passed the “Criminal Laws Amendment Act 2016”, a law that punishes sectarianism, forced conversions and mass lynching. The text has been welcomed as a step forward in the conditions for religious minorities.

The new rules amend some laws that already exist, prescribing imprisonment from one to three years for inciting religious hatred and violence. The text also makes being lynched by “crowds who take the law into their own hands a criminal offence”.