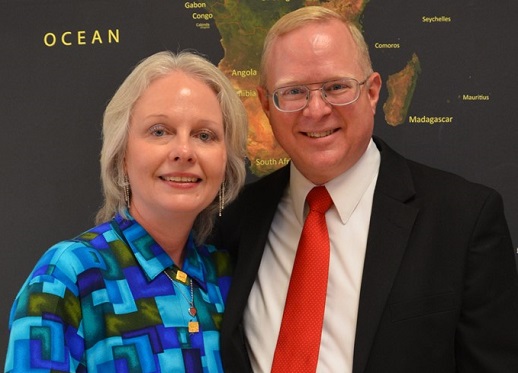 Today, Donald Ossewaarde filed an application to the European Court of Human Rights. The US Baptist preacher argues his right to religious freedom has been violated.

Mr. Ossewaarde had held weekly Bible meetings at his home in the Russian city of Oryol, 300 kilometres south of Moscow, for many years before being found guilty of conducting illegal missionary activities by a local court. He is the first US missionary to fall victim to ‘counter-terrorism’ laws that the Russian government introduced in July 2016.

“Freedom of religion is one of the most fundamental rights. Nobody should be persecuted because of their faith. Despite the Russian Constitution guaranteeing freedom of conscience and religion for all, Donald Ossewaarde has been charged with a criminal offence for holding a peaceful church service in his own home. His conviction is a hugely concerning development for religious freedom across Russia in general, and for Christian missionaries in particular,” said Laurence Wilkinson, Legal Counsel for ADF International, the lead lawyer supporting Ossewarde in his case.

“An appeal to the European Court of Human Rights represents a last resort in challenging a law that appears to violate the fundamental right of religious freedom in Russia. As a signatory to the European Convention on Human Rights, the Russian government should reconsider the scope of its counter-terrorism laws to guarantee the right to freedom of religion for all of its inhabitants. While the new legislation aims to prevent terrorist activity, it has had a devastating effect on religious activities that cannot be considered dangerous in any sense, as Donald Ossewaarde’s case and many others prove,” added Wilkinson.

Two months after Russia’s so-called “anti-missionary law” came into effect, an American missionary who lost his appeal, after being one of the first convicted under the law, says it is his “duty” to “press the case as far as I can”.

Don Ossewaarde, who has lived in Oryol (220 miles south of Moscow) with his wife Ruth for 14 years, was fined 40,000 roubles (US$640) for holding religious services at home and allegedly advertising them on the bulletin boards of nearby housing blocks.

The Ossewaardes received a visit from three police officers on the morning of Sunday 14 August, as they conducted a service. They requested that the police waited until the service had finished, after which they were driven to the local police station. Mr. Ossewaarde was then charged and taken straight to court. He was declared “guilty” two hours later and fined.

My lawyer assured me that this case will play an important role in determining the future of religious freedom in Russia, not just for foreign missionaries, but also for ordinary Russian believers.–Don Ossewaarde

After his appeal was rejected this week, he wrote an update on the couple’s blog: “Obviously, this is a disappointment. I was hoping to wrap things up here and return to my family as soon as possible [his wife has returned to America], but the issue is an important one, and duty demands that I press the case as far as I can.

“I assured [my lawyer] that I would keep pressing the appeal all the way to the highest court, and he assured me that this case will play an important role in determining the future of religious freedom in Russia, not just for foreign missionaries, but also for ordinary Russian believers.”

The judge said Ossewaarde’s guilt was “fully proven, since he carried out missionary activity without submitting prior notice in writing of the beginning of the religious group’s activity”. But Ossewaarde says he isn’t part of a religious group, while the law allows for “worship services, religious rites and ceremonies” to be conducted at home. He also denies advertising the meetings on bulletin boards and says he only gave out leaflets by hand.

Ossewaarde added that his court-appointed lawyer had advised the couple to leave Oryol “because anything might happen to him and his family”.

The Ossewaardes are not the only Christians to have fallen foul of the new law, more commonly known as the “Yarovaya” Law (the name of one of its authors), which was formally introduced as an “anti-terrorism” measure, allowing the government to monitor extremist groups.

As World Watch Monitor reported in July, however, its impact was always likely to be felt by Russia’s Christians – particularly missionaries, who now need a permit, and the so-called “house churches”, which, as the Ossewaardes’ case shows, are now illegal because religious activity is only allowed to take place inside registered buildings, such as churches.

On 26 Aug., regional news agency Forum 18 reported that at least seven people were charged under the law in the first month:

• On 28 July, Vadim Sibiryev from the Hare Krishna movement was charged in Cherkessk, near the Georgia border. (He was later acquitted.)

• On 31 July, Ebenezer Tuah, a Ghanaian Christian, was fined 50,000 roubles (US$800) for conducting baptisms in a hospital swimming pool in Tver, 100 miles northwest of Moscow.

• On 5 Aug., Aleksandr Yakimov, leader of the (unregistered) New Generation Pentecostal community in Mari-Turek (north of Kazan), was charged with “conducting missionary activity in violation of the law”.

• On 14. Aug., Don Ossewaarde was arrested and charged.• On 22 Aug., Vladimir Knaub, a Free Seventh-day Adventist, was charged in Biysk, near the eastern Kazakhstan border.

• Also on 22 Aug., Irina Tishchenko, a Protestant, was charged in Kemerovo, north of Biysk.

Forum 18’s Felix Corley told World Watch Monitor by email that “others have since faced trial and some have also been fined”.

Victoria Arnold from Forum 18 said the seven cases paint an “even more confused picture of how this new legislation will be put into practice”.

Rolf Zeegers, from the World Watch Research unit at Open Doors, concurred, saying it was “still too early to assess the impact of the new law” but that it “could be huge”.

However, Hal Freeman, an American who blogs about his life in Russia, warned against an over-simplified reading of the law. He reiterated that it was introduced primarily to counter Islamic extremism and that there is nothing in the law to prevent Christians from sharing their faith, providing they keep within the legal limits.

The law does not address the issue of communicating truths about an individual’s faith either verbally or electronically. Even if a person preaches a message and calls the listeners to come to faith in Christ, this is not missionary activity according to the law.–Hal Freeman

“It is important to remember that missionary activity is defined as occuring when a religious organization or its approved representative seeks to convince others to join that organization publicly,” he wrote. “The law does not address the issue of communicating truths about an individual’s faith either verbally or electronically. Even if a person preaches a message and calls the listeners to come to faith in Christ, this is not missionary activity according to the law [text underlined by the author].”