PUBLISHED ON 28 February, 2017 BY Julie Bourdon

Sudan (MNN) — On Sunday, Pastor Petr Jasek arrived safely in the capital of his homeland. If you’ve been following the Sudan court case saga, you understand how exciting this development is. On Monday morning, Todd Nettleton of The Voice of the Martyrs USA said, “Petr was released after extensive negotiations between the Sudanese government and the Czech government. President Omar Al Bashir pardoned him yesterday after those negotiations. Really, I think that is the fruit of those negotiations.” 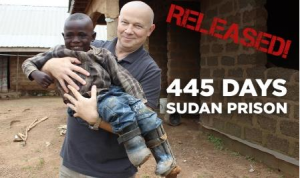 (Photo courtesy of The Voice of the Martyrs USA)

To recap: According to VOM, Jasek was convicted of spying, working as part of an NGO without permit, and more. He was given a life sentence, which in Sudan is 20 years or more. The two men alongside Jasek in this story were also sentenced to several years in prison under the conviction of aiding Jasek in his alleged espionage. Their names are Pastor Hassan Abduraheem and Abdulmonem Abdumawla.

The two Sudanese men have not been released, so we must keep praying and petitioning for them to be returned to their families.

“I believe that’s what Petr will want, too, when he begins to speak publicly,” Nettleton says.

He explains that while these two men do not have a European country advocating on their behalf like Jasek, there is hope. The United States, for instance, has influence here.

Rev. Hassan Abduraheem (Photo courtesy of The Voice of the Martyrs USA)

He believes Sudan will want to make a good impression on the United States. When summer comes and the sanctions are reassessed, the State Department will have the ability to activate sanctions again, extend the waiting period, or cut them altogether. Sudan’s decision on these men could influence that decision. Consider sending a letter to your government official, or a letter to encourage these men. Click here for more information.

But along with petitioning, there are two very important things you can do.

“Petr has served Voice of the Martyrs as our Africa Regional Director. We have grieved every day for the last 445 days while he’s been in prison. Our staff has been in constant contact with his family, encouraging them. And we just want to say, ‘Thank you, God!’ God answered our prayers. One of the things that Petr said from the very early days that he was in prison, he said, ‘God holds the key to my cell.’”

So, Nettleton encourages us to pray this way:

Pray also for Jasek and his adjustment back to civilian life. Ask God to allow his health evaluations to come back normal. Pray that this story will influence the spread of the Gospel.

But most of all, Nettleton says, praise the Lord!