Second pastor in the state attacked on his farm in one week. 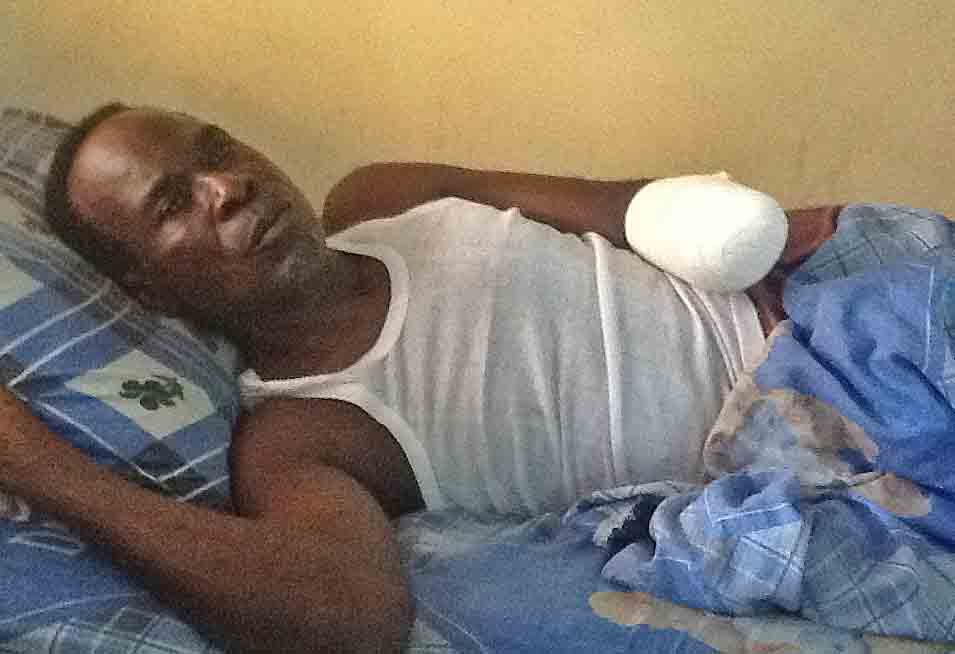 KEFFI, Nigeria, July 22, 2016 (Morning Star News) – Two days after a slain pastor in one part of Nasarawa state, Nigeria was buried, a Muslim Fulani herder in another part of the state cut off part of the hand of another pastor working on his farm.

The Rev. Hamza Alkali, 66, had to have the rest of his hand and his wrist amputated. He told Morning Star News he managed to tackle the assailant and wrest the knife away from him or he would have been killed in the attack in Sabon Gida village, near Keffi, on July 7, two days after Muslim Fulani herdsmen with machetes killed the Rev. Zakariya Joseph Kurah at his farm near Lafia, about 120 kilometers (75 miles) away.

“If God was not with me, the Fulani man could have succeeded in taking my life,” Pastor Alkali said. “God was with me, because I told the Fulani man that God who created me in His image will not give him power to kill me.”

Affiliated with the Nigerian Baptist Convention, Pastor Alkali said when he first saw the herdsman coming onto his farm he thought he was just passing through. He continued working when the Fulani came up to him without greeting and asked him to hand over his mobile phone.

The herdsman then told the pastor he would search him.

“I was baffled and wanted to know why he would want to search me,” Pastor Alkali said. “He bluntly told me that if I don’t hand over my mobile phone to him he would kill me. Then I now told him, ‘You have no right or power to kill me. The God that created me and sent me to this place will not allow you to kill me.’ I repeated these words twice to him.”

Pastor Alkali came to Nasarawa state from his native Kaduna state more than 14 years ago. The herdsman’s intent was first to take away his mobile phone to prevent him from getting help once he attacked him, he said.

“Suddenly, the Fulani man pulled out his sword and attacked me. When I saw the sword he was dangling coming towards my face, I tried to protect my face raising my hands up, and within seconds the sword cut off my left hand into two. I saw part of my cut-off hand on the ground bouncing up and down. I then realized that if in the first attempt to kill me the Fulani man cut off my hand, unless I do something to protect myself, this Fulani man would no doubt in his second attempt to kill me cut off my head.”

The pastor rushed at him, wrestled with him and held him, in spite of his severed, bleeding hand. While held on the ground the herdsman was still gripping the sword, and the pastor managed to snatch it from him. The assailant ran away.

“I was there and the blood from my cut-off hand was rushing out,” Pastor Alkali said. “I started shouting and calling on some Christians working on farms close to mine to help rescue me. They came and pursued the Fulani man. But then they could not get him, and so they returned to find ways of taking me to the hospital.”

They took him first to the police station at Sabon Gida, where he pastors a congregation of 80 people, and from there police took him to the Federal Medical Centre, Keffi.

Pastor Alkali said he has never had any conflicts with the assailant, whom he had never met before, or any other Fulani herdsman, so he was surprised that he was attacked for no apparent reason except that he was a Christian pastor.

Throughout years of doing ministry in Sabon Gida he has enjoyed good rapport with both Christians and Muslims, he said. Many Muslims visited him in the hospital, he said.

“Both the Muslim leader in community and chief imam of the mosque in the village also visited me here in this hospital,” he said. “And this is all because of the way and manner I related well with them while working as a pastor there.”

A father of four, Pastor Alkali had pastored Sabon Gida Baptist Church between 1992 and 1996 and then retired, but in 2011 members of another congregation (undisclosed for security reasons) asked him to pastor their church.

He said that since Jesus Christ was persecuted, Christians must endure hardship and face any persecution head-on.

“Every Christian that is passing through persecution should stand firm, as God will not abandon such a person,” he said. “Our persecutors should know that one day they will stand before God to account for what they done here on earth. So what they should do is to come closer to God. They should repent and leave the evil ways they are following.”

The pastor said he and many other Christians in Nigeria are attacked for their faith.

“There are many out there who are victims of such attacks, and they are suffering,” he said. “These armed Fulani men are killing innocent people in Nigeria. The best thing that needs to be done by the Federal Government of Nigeria is that it must act to end these atrocities against Christians. These killers should be stopped.”