Buddhist monk said to be using structures for religious, political aims By Our Burma Correspondent 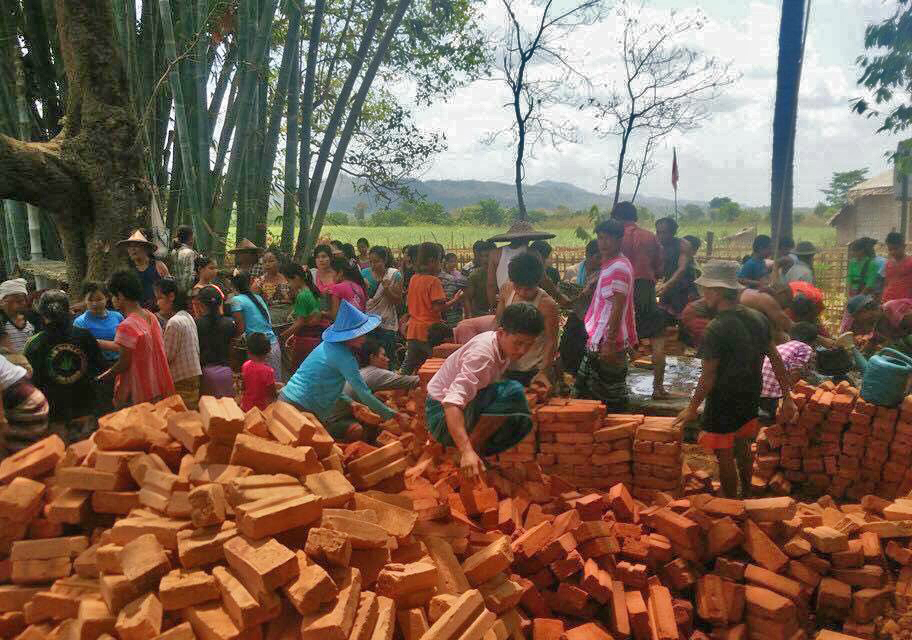 Initially social media and news media registered an outcry from Christians when U Thuzana, a powerful monk better known as Myaing Kyee Ngu Sayadaw, rallied supporters to build a Buddhist pagoda on Anglican church property in southeastern Karen state on April 23 – the third Buddhist shrine that he has erected on church lands.

A bishop at St. Mark Anglican Church, where the pagoda was built in Kun Taw Gyi village, said Christian leaders don’t want to inflame religious and ethnic conflicts in a country where a newly-elected democratic government is striving for national reconciliation; besides trying to quell ethnic separatist movements, officials have had to deflect Burmese Buddhist rancor over the Assembly-election of an ethnic Chin Christian as vice president, Henry Van Thio.

“The new democratic government that came into power is trying for national reconciliation and ending armed conflict,” Bishop Saw Stylo told Morning Star News. “If we ignite [religious dispute] while the country is moving forward to a new chapter of the journey, it is likely that we will pass down a bad inheritance to our next generations. We don’t want to pass down this kind of inheritance, so we don’t respond.”

Christians wish peace to prevail, he said, and they also have a faith-based reason for graciously bearing up under injustice.

“We have to forgive each other,” Stylo said. “We can only see God if we forgive. So we always have to keep forgiveness with us.”

If the new government doesn’t take action against the illegal constructions, however, the menace will likely grow, as Buddhist organizations are among the most powerful institutions in Burma, he said.

Why Build Pagodas?
Sayadaw was not available for comment, but by talking with associates and followers of the provocative monk, Stylo gained some insight into what Sayadaw hopes to accomplish by building pagodas on church grounds – including one on church land in Hlaingbwe in January, and another in a Baptist compound in Pa-an, capital of Karen state, beginning in August of last year.

When the bishop visited the monk’s temple to request that he cease building the pagoda on the Anglican property, Sayadaw was not present, but a senior monk told Stylo that Sayadaw longed to place pagodas where he believes they had existed 2,000 years ago.

The senior monk described Sayadaw’s longing figuratively as a “dream.”

“Whenever he gets a dream to build pagodas in any place, he accomplishes it,” Stylo said. “And all the places he has dreamed of are in Christian church compounds. We pray that he doesn’t dream anymore of building more pagodas on our Christian properties.”

Besides taking territory from Christians, there appears to be an ethnic/political motive to the monk’s pagoda-building. Followers of the powerful monk who helped erect the pagoda on the Anglican property told Stylo that Sayadaw believes the presence of pagodas will somehow lead to the disappearance from Karen state of the majority Burmese – though they too are predominantly Buddhist.

In 1995 the monk played a major role in dividing the armed, ethnic Karen group known as the Karen National Union (KNU) that was fighting for autonomy against Burma’s then-ruling junta. His Democratic Karen Buddhist Army (DKBA) split from the Christian-dominated KNU, leading to serious fighting and many deaths between the two groups.

With support from the Burmese government army at that time, the Buddhist-led DKBA troops launched attacks against the KNU, seizing major territories and bases.

During colonization by Great Britain, the Karen minority sided with British troops, and they fought alongside the British against the Burmese government army during World War II. Many animist and Buddhist Karen people converted to Christianity with the help of missionaries at that time.

Christian Karen consequently have long suffered in Burma, where the government has recognized the special status of Buddhism and promoted it as a means to consolidate support. Burma is about 80 percent Buddhist and 9 percent Christian.

In this context, Stylo urged Christian communities in Karen state to refrain from responding to the pagoda-building in an angry or violent manner in order to avoid the religious and armed conflicts that have been plagued the country for more than 60 years, contributing to poverty and human rights abuses against the Karen and other civilians.

“Burma has been a battlefield for over 60 years,” he said. “The English colonized it. Armed resistances and rebellions later occurred. Karen fellows were divided. We have been suffering painfully from the consequences of these conflicts.”