Woman in Uganda Says Muslims Beat, Raped Her for Accusing Imam of Killing Her Father 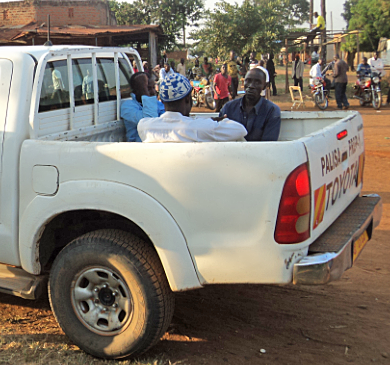 NAIROBI, Kenya, April 30, 2016 (Morning Star News) – Muslims in eastern Uganda beat and raped a young Christian woman for testifying that a mosque leader killed her father because of his faith, sources said.

The imam at a mosque in Kanyumu village, Pallisa District, Sheikh Musana Ibrahim, and two other Muslims killed Samson Mukama on Jan. 28, according to his daughter.

The 22-year-old woman, whose name is withheld, said she was beaten and raped on April 19 for telling a court what she had witnessed. She was found unconscious in a pool of blood, with several cuts on her body, after the attack on her that evening at the home in which she had taken refuge in Kanginima village, Pallisa District.

She told Morning Star News that one of the three Muslims who assaulted her told her, “We shall kill you today because you are the one who made our sheikh to be imprisoned.”

Present at her family's house in Kashebai, Pallisa District, when the imam and two other Muslims allegedly attacked her 40-year-old father, she had testified in court that the mosque leader had killed him.

“I was able to identify the sheikh because we are neighbors, and my father had been questioning him about the Islamic faith not leading one to salvation with God,” she said from her hospital bed. “The sheikh had said to him, ‘You have no respect of our religion, and we have come for your life today.’ They started strangling my father as well as hitting him on the head with a big stick. When my father fell down, I managed to escape through the window.”

Police arrested Ibrahim and the other two suspects on Jan. 29, but she was unable to identify the two others, and they were released after being held in a cell in Kalaki, Pallisa District. Ibrahim was transferred to a cell in Kamuge, where he is awaiting the court outcome. Pallisa Police Officer Otwai Francis is carrying out the investigation.

An autopsy by a clinic in Mbale affirmed signs consistent with a homicide, a source said.

An elder at an undisclosed church is caring for the young woman, whose mother died five years ago and who has no siblings. She is still in serious condition and taking medication, and she has weekly follow-up visits with a doctor for the next three months that cost 120,000 shillings (US$35) each.

Samuel Kijali’s wrist was broken in the April 18 assault in Nalugondo village, an area source said. An unsigned note near the remains of the building of his 450-member Nalugondo Church of Uganda, which an Islamist mob demolished on April 12, read, “We are monitoring your movement and will soon come for your life.”

Kijali was beaten for raising pigs and for his evangelistic outreach to Muslims, an area church leader told Morning Star News by phone. He said Kijali was attacked at 8 p.m. while on his way home to his village near Bugade, Mayuge District, 93 miles east of Kampala.

On April 10, a group of Muslims shouting “Allah only is to be worshipped, and Muhammad is his prophet,” had slaughtered his pigs, a key source of income. A few weeks before the slaughter, Kijali had received text messages on his phone saying that church members must stop raising pigs.

About 85 percent of the people in Uganda are Christian and 11 percent Muslim, with some eastern areas having large Muslim populations.