Central Asia (MNN) — Churches in Central Asia are facing a unique kind of persecution — their children’s summer camp ministries are the targets. 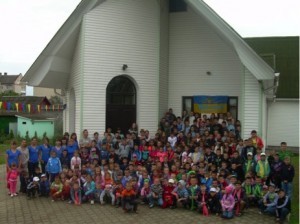 200 children and teens heard the Gospel at a summer Bible camp in 2015.
(Photo, caption courtesy SGA)

Eric Mock with Slavic Gospel Association explains, “A particular pastor desires to hold a summer camp, and the authorities came and said, ‘You cannot have this.’ In fact, in many camps across Central Asia, they will come with guns, with film crews looking for identification papers, permission from the parents for the children to come, and [they will look] for ways to break up the summer camp, to break up the work of the Church and even break up the Church.”

Most of these churches are in Muslim-dominated countries stricken by poverty. Surprisingly, though, it’s not just Christians who are targeted because of their religion. According to Mock, governments in this area will just as soon tear down a mosque as a church. Officials see religion as a threat to their power.

In fact, a person can go to authorities and claim a believer was trying to share his or her faith. This will almost surely land the Christian in jail. Thankfully, “this has not slowed down the summer camp ministry,” Mock says.

“God has provided them boldness, courage, and certainty that what they are doing is blessed by Him.”

Mock uses the analogy of David and Goliath. While the other Israelite’s feared Goliath, David ran in the confidence of the Lord to meet his foe. It’s what many Central Asian churches are doing today. 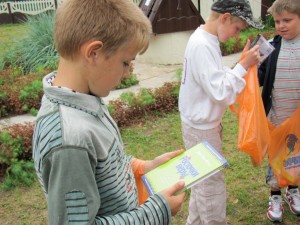 SGA partners help provide each child with his or her very own Russian-language New Testament, as well as other materials and needed supplies for camp ministries. (Image, caption courtesy SGA)

Pray for their endurance and safety, and for God to be known, even where His Word is restricted by Goliath governments. Also, pray for churches in the area who recently received bomb threats. Church leaders have taken the issue to authorities. Pray these Christians remain safe, the perpetrator is caught, and for his or or her heart to be turned to Christ.

Click here to learn more about the recent bomb threats and how to pray.

If you’re looking for a physical way to help the churches, donations to SGA are used to serve Bible-preaching churches in Russia and the Commonwealth of Independent States, like Central Asia, by helping national pastors and churches reach their people with the Gospel. Any amount helps to fund these churches facing persecution and poverty.