Monks on Mt. Zion are attacked nearly once a week. By Our Middle East Correspondent 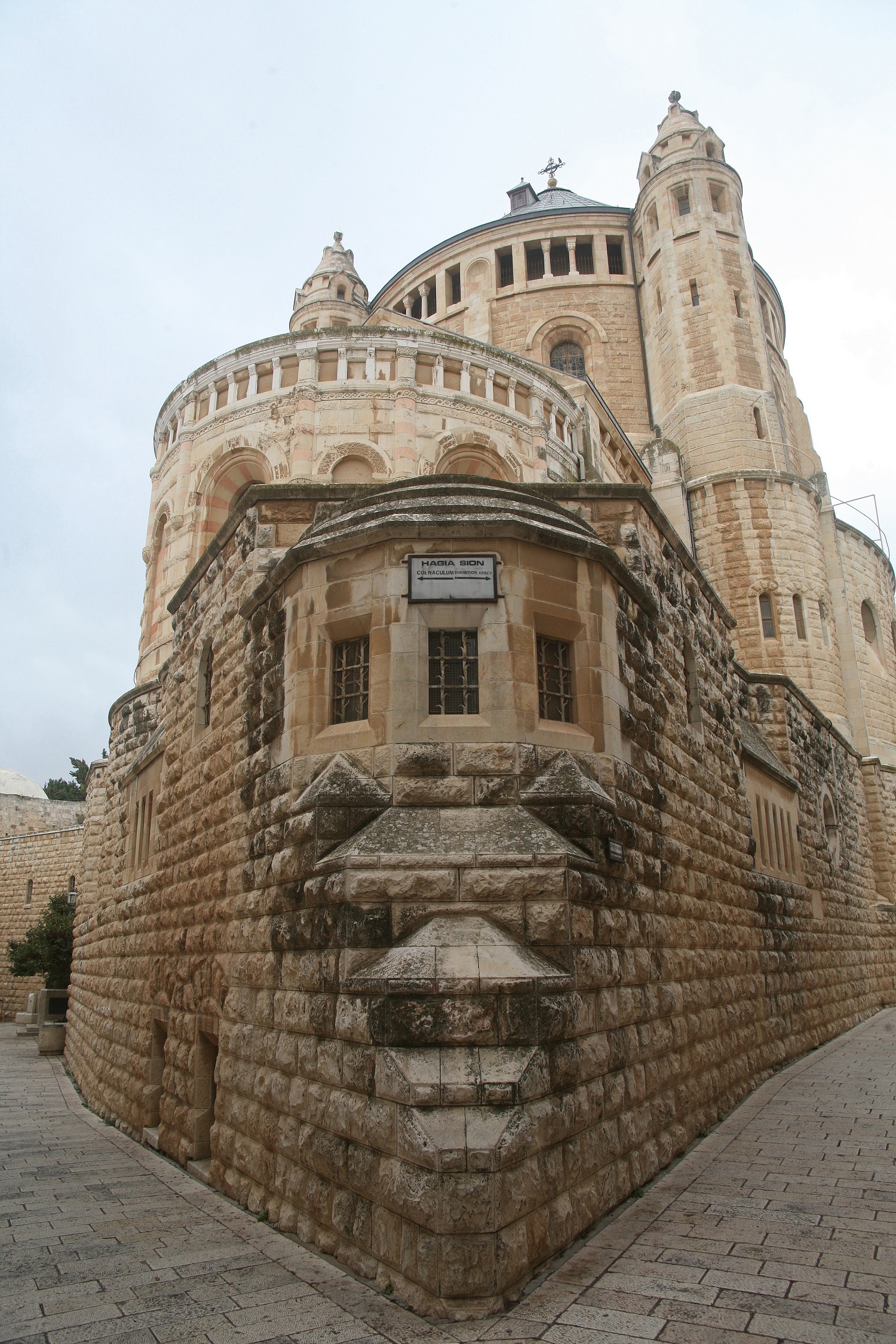 ISTANBUL, Turkey, February 15, 2016 (Morning Star News) – After waiting for years for police to act against vandalism that has plagued the Dormition Abbey in Jerusalem, monks welcomed recent arrests but seek government action against root causes of the attacks.

Ultra-right-wing nationalists in Israel, though a tiny minority, are increasingly attacking Catholic monks with an alarming level of vitriol. The monks seek efforts to educate at-risk youth who fall victim to Israel’s far right nationalist movement.

Besides burning a church building near the Sea of Galilee last year, nearly once a week the Israeli nationalists are spitting at Roman Catholic monks or throwing rocks and bottles at them when they venture outside the Dormition Abbey, a spokesman said. On Jan. 31, three teenage nationalists were charged with “destroying property based on hostile religious motives” and harming religious sensitivities; on Jan. 17, two of the three allegedly wrote on abbey walls, “Death to the heathen Christians – the enemies of Israel,” among other things.

The third youth arrested was charged with vandalizing buildings on the Via Dolorosa, the path that traditions says Jesus walked on the way to crucifixion. Because the three defendants are minors (15-16 years old), prosecutors did not release their names.

The youths are part of a group of ultra-right-wing nationalists known as the Hilltop Youth, also known as the Hill Toppers or Givonim in Hebrew, the Rev. Nikodemus Schnabel, abbey spokesman, told Morning Star News. The motivation of the attacks is hatred toward Christians tinged with nationalism. 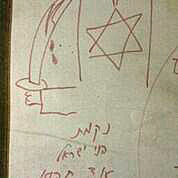 Schnabel said leaders in the ultra-right nationalist movement take teenagers and other young men on the margins of society and brainwash them into committing the attacks, such as the spitting incidents that Schnabel said he has had to endure on occasion.

“The people that attack me are never 50-year-old men,” Schnabel said. “They’re always in the beginning of their 20s. I feel sorry for them; I know that at that age it is often difficult to become an adult. I am not angry about these people, I am angry about the people behind them.”

The estimated 35, die-hard Hill Topper youths are supported by about 100 older members that provide financial and other support for the group, according to Israeli authorities. An additional group of several hundred ultra-right nationalists support the Hill Toppers’ political agenda of ridding Israel, defined by their own set of borders, of all non-Jews.

Ultra-nationalists began harassing the monks in 2009, when they began spitting at them as they walked outside the monastery compound. The assailants often threw bottles or rocks at the monks, as they do in attacks that now take place nearly once a week, Schnabel said. No one has ever been seriously injured in the attacks.

“There is one really huge misunderstanding,” he said. “People think they are the ultra-Orthodox guys from Mea She’arim [an ultra-Orthodox neighborhood infamous for pelting outsiders with rocks and spitting at them] – it’s not. They are members of the Hill Toppers.”

The Hill Toppers seek to create a religious state in Israel based solely on the Torah (Hebrew instruction on life and law), excluding all non-Jews, which would be led by a Jewish king. The Israeli government had a largely hands-off approach to the group until about two years ago, when the Israeli Security Agency (ISA), better known as the Shin Bet, began a massive investigation into the group and arrested about two dozen of its members.

The three teenagers suspected in the vandalism of the abbey last month were indicted in Jerusalem District Court.

“The three walked through Hagai Street in the Old City, eventually arriving at the third stop of the Via Dolorosa walk,” according to an Israeli Justice Ministry press statement. “One of the defendants started writing messages on the site to insult Christianity and Jesus. The second defendant served as a lookout while the first wrote the messages.”

The two teenagers proceeded through the Old City of Jerusalem and separated, but later one of them met up with another youth, and by the early morning of Jan. 17, the two wrote offensive messages on walls and doors next to the Dormition Abbey, according to the Justice Ministry.

Besides writing, “Death to the heathen Christians – the enemies of Israel,” they scrawled in red ink, also in Hebrew, “May his name be blotted out,” and “Go to hell” on the walls. Investigators were able to identify the alleged perpetrators of the Jan. 16-17 acts by video from security cameras ubiquitous in the Old City, according to Micky Rosenfeld, spokesman for the Israeli Police.

“Several days after the incident, we arrested one suspect who was questioned, held under arrest and appeared at the Jerusalem courts,” Rosenfeld told Morning Star News. “The investigation into this incident continued, and we arrested a second suspect who was also questioned and arrested.”

Schnabel, the spokesman for the abbey, said after the arrest, “We pray for the teens – that’s our vocation.”

Schnabel sees the youths as only partially responsible, being largely victims of ultra-right-wing nationalist brainwashing. From lack of effort or will, the Israeli government has failed to stop the brainwashing of similarly motivated youths by ultra-right nationalists such as Rabbi Bentzi Gopstein, Schnabel said.

Gopstein leads the right-wing extremist group Lehava, which claims that the mere presence of a Christian on Mt. Zion “defiles” it. On more than one occasion, Gopstein has publically supported the burning of church buildings, even after the Church of Multiplication was set on fire. In one editorial in the extremist news website Kooker, Gopstein called Christians “blood-sucking vampires” out to exterminate Jews, and he accused the government of turning a blind eye to Christians doing missionary work in the country.

“Missionary work must not be given a foothold,” he said. “Let’s throw the vampires out of our land before they drink our blood again.”

Ultra-nationalist leaders are also doing their part, Schnabel said, to circulate a conspiracy theory in right-wing nationalist newspapers, such as Makor Rishon, that the monks of Dormition are a Christian version of the Hill Toppers youth sent by the Vatican to fight against the Jewish people.

“It’s totally stupid, you know – they think because we have such a huge building, we are a landmark,” he said, “and because the pope came here and performed the Eucharist, they think the Christians want to Christianize the whole area and want to forbid the Jews from entering, and this is, of course, totally false.”

On May 26, 2014, a few minutes after Pope Francis conducted a Mass near the abbey during an official state visit to the country, someone set fire to the abbey church’s book of supplications, in which visitors write prayers. The book was then thrown into a storage closet, the contents of which caught on fire but were quickly doused by the monks. Hill Toppers were suspected.

Church officials expressed disappointment that someone was able to start the fire in an area that was sealed off by Israeli security forces because of the pope’s visit. The fire was started shortly before 7 p.m.; the pope’s Mass ended at 6:30 p.m., so the security team was still in the vicinity when the arsonist struck.

While the spitting and stone-throwing at the monks began in 2009, the first known vandalism of the abbey happened on Oct. 2, 2012. Monks found graffiti by Hill Toppers or other ultra-nationalists on a door near the abbey’s church building that read, “Jesus, son of a bitch, price tag.” Acts of vandalism and arson meant to intimidate the members of one ethno-religious group by another in Israel are known as “price tag” attacks.

Less than a year later, on May 30, 2013, suspected Hill Toppers or other ultra-nationalists punctured the tires of two vehicles parked outside the abbey and spray-painted the words, “Jesus is a monkey” and the name of an illegal Jewish settlement on the walls of the abbey.

Like the abbey, the Church of the Multiplication, near Tiberius on the Sea of Galilee, is part of the Benedictine Order. On the evening of June 18, 2015, suspected Hill Topper youths set fire to the church building and a library that is part of it. Yinon Reuveni, 20, and Yehuda Asraf, 19, were indicted on July 29, 2015. The next day a third suspect, Moshe Orbach, 24, was indicted for distributing materials with the intent to incite violence.

The venerable building is located on the site where tradition says Jesus performed the miracle of feeding a multitude of 5,000.

An 80-year-old monk and a German volunteer were injured in the fire and were hospitalized for treatment of smoke inhalation. The fire gutted the church building and the library, causing nearly $1.8 million in damages. Spray-painted, anti-Christian graffiti also appeared on the church walls.

It was the second time extremists attacked the property. On April 27, 2014, a group of about 70 young extremist Jews desecrated crosses and an altar at a grotto at the site, and they threw stones, shouted obscenities and spit on a woman staying at a nearby guesthouse.

Disappointed with Police
According to a study conducted jointly by Search for Common Ground and the Council of Religious Institution of the Holy Land, there were 156 “price tag” attacks between 2011 and 2015. Of the total vandalized, 30 were Christian sites.

Proportionate to the 2 percent Christian population of Israel, the Christian sites were hit at a higher rate than the Jewish and Islamic ones. There are approximately 8 million people living in Israel, 75 percent of them Jewish and 17 percent Muslim. Seventy-one Jewish sites were vandalized during that time, followed by 55 Islamic sites, according to the study.

Motivations for attacks on Christian sites can be mixed; a church attended by Palestinians may be attacked for political reasons as well as religious ones.

In spite of the arrests that have been made, the monks at Dormition are dissatisfied with police efforts to stop the attacks, mainly because officers have tended to make excuses for the harassment and attacks instead of taking them and their cause seriously, Schnabel said.

The attacks cannot be written off to “Jerusalem syndrome,” said of people supposedly compelled to commit strange religious acts once they are in the Holy City, or drunken parties that lead to raucous behavior with no religious hatred element, as police have often asserted to the monks, Schnabel said.

“It is, I am sorry to point it out, a problem of right-wing extremism inside of Jewish society,” he said. “It’s a tiny, tiny minority, but a very radical minority, so please come on and face the problem.”

Though the attacks have been stressful and disheartening for the monks, they have also generated sympathy for them, and Schnabel said most Israelis support the abbey. Every time they are attacked, Israelis reach out to the abbey, sometimes in droves, in friendship from across the spectrum of Jewish groups in the country. Secular Jews, reform, conservative and even ultra-Orthodox Jews have all come to the abbey in person, Schnabel said, to say, “We are really with you.”

“Never in our history have we had so many Jewish supporters,” he said. “It was wonderful, because really I think it’s a kind of God’s humor,” Schnabel said. “These idiots that are attacking us think with their hate, all of this hate against us as Christians, and they try to spoil our lives to make it difficult. But in fact, with every attack, we have more Jewish friends.”