PUBLISHED ON 4 February, 2016 BY Ruth Kramer

Egypt (MNN/SAT7) — Egypt: a country trying to keep the lid on turmoil threatening to boil over at any second.

Given the anticipated uproar surrounding the 5th anniversary of the Arab Spring uprising, the government began cracking down months ago on anyone they perceived to be dissenters: raiding offices, collecting equipment, and arresting people.

On October 10, 2015, the SAT-7 Cairo studios were raided. The question: was this connected to the official crackdown? As it is with any speculation, suggested theories could be debunked but then resurface as different conjecture. SAT-7 USA president Dr. Rex Rogers demurred on the subject, redirecting to the facts at hand.

In the October raid, censorship police removed much of the studio’s production equipment, including cameras and all of the computers used for editing. Executive Director Farid Samir was also temporarily detained over “licensing” issues. Rogers says, “They issued three legal challenges, all of which we’ve been able to demonstrate are not valid.”

The problem is that when authorities took the equipment, they made it so the SAT-7 team couldn’t function. “We’ve had to shut down our live programming,” says Rogers. “We had $100,000 worth of equipment that was not central to it [live programming], and I might add, along with the equipment, on…one of those drives were unedited programs that had been filmed but were not backed up because they were still in the editing phase.” However, the SAT-7 ARABIC and SAT-7 KIDS channels screened live programs from the SAT-7 Lebanon studio and programs produced by SAT-7 partners as normal. 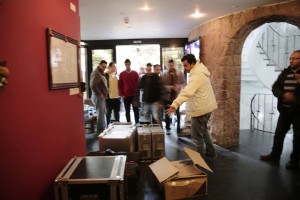 After three months of downtime, police returned all confiscated equipment to the SAT-7 studio in Cairo. It’s a relief, but there are still concerns, says Rogers. First, “We’re still in the process of trying to determine just what shape it’s in [the equipment]: is it all okay? Is it accessible? Can it be rebooted?”

Second, the case “has not been completely dismissed, so what remains open is actually the charge against the executive director.” The latest on that, says Rogers: “Just to boil it down and say that his name was confused with someone in the southern part of the country. Whatever the crime supposedly was had nothing to do with our man. But whether that was invented, or that was a mistake somehow (bureaucracy), we don’t know. Thankfully, that’s been demonstrated to be erroneous.”

As the team regathers to get things moving toward full function, the chilling effect could come into play. A chilling effect describes a situation in which rights, like free speech, are threatened by the possible negative results of exercising these rights. The effect is to silence free speech. Rogers agrees. “Sometimes it’s not what is done, but the threat of what could be done. So, something like this happens, and it’s really never followed through with, but it’s the implied statement [from the government] that ‘We could do more.’”

To that end, pray for wisdom, creativity, and boldness, Rogers urges. “We’re still not certain that we can do live program filming in our studios as we’ve done before, so that’s a prayer request. Another prayer request, of course, is to have all of the charges that are erroneous completely dismissed against our executive director, and then be able to return to full functioning.”

Samir, in a press release, said, “During the last few weeks, our spiritual muscles were stretched. But the support of the worldwide Church kept us encouraged.”

SAT-7 is a Christian satellite television ministry to the Middle East and North Africa. The ministry has five channels (SAT-7 ARABIC, SAT-7 PARS, SAT-7 KIDS, SAT-7 PLUS and SAT-7 TÜRK). Their goal is to show viewers God’s love, give local churches a satellite TV platform to educate and encourage their communities, and to build bridges with the non-Christian majority without compromising the truth of God’s Word.