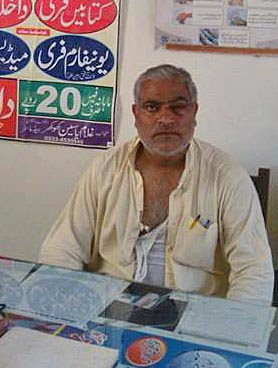 LAHORE, Pakistan, October 22, 2015 (Morning Star News) – Police have filed a false blasphemy charge against a Christian in Sargodha because he refused their requests for money, a relative said.

In a separate incident also in Punjab Province, Muslim high school teachers assaulted a Christian headmaster because he had been promoted over them and refused to comply with their demands.

In the blasphemy case, a relative of 24-year-old Naveed John said people regularly came to him for healing prayer. Police set up John, a Catholic, with an accusation of ritually using a sword inscribed with Koranic verses because he had been ignoring their threats to take action if he didn’t pay them money, the relative said.

“On the day of the incident [Oct. 10], Naveed received a phone call asking him to visit an ailing Muslim for prayer,” said the relative, whose name is withheld for security purposes. “When he reached the designated place, the police pounced on him and later raided our home, from where they seized the sword.”

Satellite Town police arrested John in a case (No. 619/15) registered by Constable Asad Abbas on charges that John had dishonored Koranic verses inscribed on the sword by using it to treat his clients, thus hurting the religious sentiments of the Muslim community.

“John made cuts on the bodies of his patients with a sword inscribed with Koranic verses and also placed it at his feet,” a complainant said in the First Information Report registered under Section 295-A of Pakistan’s controversial blasphemy laws.

Section 295-A outlaws insulting religion or religious beliefs with “deliberate and malicious intention of outraging the religious feelings of any class of the citizens of Pakistan, by words, either spoken or written, or by visible representations.” It is punishable by imprisonment of up to 10 years or a fine, or both.

Police said one of the complainants had submitted a video of John using the sword “while treating his patients, and placing it on the ground.”

John’s lawyer, Tahir Naveed Chaudhry, said that his client was the victim of a fabricated case. According to John, a Muslim devotee had given him the sword inscribed with the Kalma (Koranic verse proclaiming Muhammad as prophet) as a gift, and he had hung it on a wall in the room where he prayed, Chaudhry said.

“John did practice faith healing, and he had a number of Muslim followers who used to frequently visit his home for prayer,” said Chaudhry, also a former provincial lawmaker who heads the Pakistan Minorities Alliance (PMA) political party. “John says he did not use the sword for any purpose, nor has he desecrated it in any way. We suspect that he has been trapped by some Muslims who wanted a share in his earnings.”

A police official investigating the case, who spoke on condition of anonymity, said the accused Christian had been sent to jail on judicial remand “because he has confessed to his crime.” On Wednesday (Oct. 21), however, one of John’s attorneys said a trial judge had granted the Christian post-arrest bail.

Pakistani police are known to regularly extract “confessions” through torture.

“The government must take notice of illegal actions of its law enforcement personnel, who have involved an innocent man in a fake blasphemy case after their efforts to blackmail him into paying extortion failed,” he said.

Teacher Assaulted
In Kasur District’s Pernawa area, Muslim teachers at a government high school on Oct. 5 assaulted a Christian headmaster who reportedly refused to acquiesce to their demands.

Local news reports stated that Muslim teachers at Pernawa Government High School first pressured headmaster Saddique Azam to resign, saying that they refused to accept a government-imposed Choora, a derogatory term referring to impoverished Christian street sweepers, to supervise them. They then reportedly told Azam that the only way he could continue as the head teacher was to become a puppet in their hands.

Tensions came to a boil when teacher Muhammad Javaid on Oct. 1 asked Azam to write a falsified letter excusing Javaid’s two days of absence, according to International Christian Concern (ICC). When Azam refused, Javaid threatened him and stormed out, and on Oct. 5 he returned with five others.

According to local reports, the Muslim teachers then kicked and punched Azam, seriously injuring his left eye, for which he received hospital treatment.

Three Muslim teachers were reportedly taken into custody, but no case has been registered against them. ICC reported that police have released Javaid and his alleged accomplices at the urging of a local political activist.