PUBLISHED ON 28 September, 2015 BY Reagan Hoezee 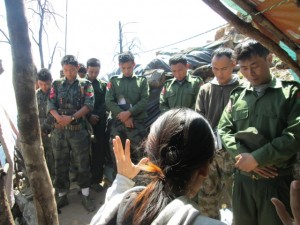 Burma (MNN) – Would you ever consider moving to a war-torn country hostile to Christianity to share the message of Jesus?

For the last 17 or so years, that’s what one Vision Beyond Borders-supported missionary has been doing. While Burma’s civil war has externally displaced over 2 million people and killed another half million, she is striving to bring hope.

“There’s actually about 250,000 people in refugee camps along the Thailand-Burma border,” says VBB’s Dyann Romeijn. “So because of the results of a long-going civil war conflict, a lot of these kids have actually seen their parents killed by the Burmese army.

“There’s a huge need for orphanages. A lot of these children are orphans; some of them do have parents but they’re back in Burma where it’s dangerous for them, so the parents will actually send their children into the children’s homes where it will be much safer for them and where they can get an education,” Romeijn says. “They have children’s homes within the refugee camps, and they’ve rescued a lot of children.”

These children homes were started by the VBB-supported missionary, and not just as a safe haven for young war victims. Her goal is to help these children find a lasting hope through the message of the Bible.

“They’re growing up in the love of Jesus, and these kids sing and read their Bible,” Romeijn says. “They get up at 4 o’clock in the morning so that they have time to read their Bible before the day starts.”

Working for the Lord in a war-torn country hostile to Christianity is dangerous enough. But it doesn’t stop there. The missionary has carried Bibles to the Kachin resistance forces on the frontlines to encourage them in the Lord. 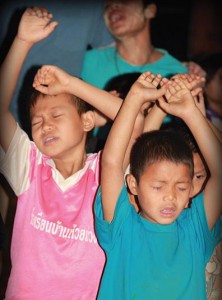 “She actually will travel to the frontlines and will supply Bibles and pray with the troops there and witness to them,” Romeijn says. “A lot of them are Christians that are actually trying to hold the army off of the villages and from the people being slaughtered.

“I remember one story that she was telling. They saw the actual Burma army, and they had to go through their checkpoint, and they knew that if they knew where they were going and what they were doing, they would be taken,” Romeijn says. “But still, they felt like God had told them go there and to minister, and so they went ahead and went through, and they didn’t even stop their vehicle.”

But don’t forget to pray.

“One of the main things is to pray,” Romeijn says. “That’s the biggest thing that people can do–just truly pray for these people.”