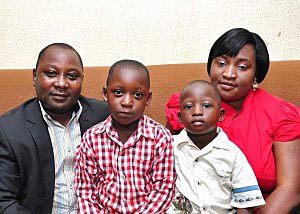 ABUJA, Nigeria, August 29, 2015 (Morning Star News) – A pastor stabbed in April by rampaging young Muslims in Kaduna state has suffered a relapse after an initial recovery, while hundreds of Christians from Plateau state this week traveled to the federal capital to protest ongoing violence in their state.

The Christians charged into the streets of Abuja two days after two more Christians were found killed by suspected Muslim Fulani herdsmen in Plateau state. The bullet-ridden bodies of Ibrahim Nyam and Jimmy Pam were discovered on Sunday morning (Aug. 23) in Barkin Ladi Local Government Area. Muslim Fulani herdsmen active in the area were suspected of killing the two members of the Church of Christ in Nigeria (COCIN) the previous evening as they traveled together by car, said two sources, one a COCIN member.

Christian groups from Plateau state on Tuesday (Aug. 25) went to Abuja to meet with U.N. Secretary-General Ban Ki-moon and present him with a petition outlining attacks on Christian communities by armed Muslim Fulani herdsmen. Ban was in Nigeria to meet Nigerian President Muhammadu Buhari.

Kate Pam, leader of a Christian group petitioning the U.N. secretary-general, told Morning Star News that the killing of Christians in Plateau has become a recurring problem that the Nigerian government has deliberately shied away from tackling.

“How many more do we have to bury?” Pam asked as she led protestors with banners bearing photographs of victims of the killings.

The petition to Ban begins, “We bring you greetings from the traumatized men, women and children of Plateau state. Permit me, sir, to give a summary of the nightmare that our lives have become in the past decade.”

Noting that the predominantly Christian Berom farmers historically gave their land as pasture to the Fulani livestock (the farmers used the manure to fertilize their crops), the petition states that tensions reached a climax on March 10, 2010, in the Dogo Nahawa massacre in which more than 500 men, women and children were slaughtered in a “cowardly dawn attack.”

“From then on, we have not known peace. Our tormentors have moved from village to village, killing, maiming, looting, shooting, burning,” the petition states. “From May this year, the attacks on our villages have increased in frequency and intensity. The people of Riyom and Barkin Ladi are worst hit. An average of 10 people are killed every week. On the 2nd of May, 27 people were massacred in a COCIN church in Foron. Among the dead were the pastor of the church, Rev. Luka Gwom, and a young woman who only just got married two weeks earlier. Two days later, 30 people were killed in Zakupang in Barkin Ladi LGA.”

Another attack on Kakpwis village left two men dead, and villages in Barkin Ladi have continued to suffer attacks at least twice week, according to the petition.

“On the 29th of May, over 500 gunmen invaded Shonong village, leaving a trail of corpses, ashes and smoke,” it reads. “That attack left over a thousand people displaced with about 300 houses razed to rubble. The month of June has also been a nightmare for the people of Barkin Ladi and Riyom. Over 20 villages have been attacked in well-coordinated attacks. In the first 10 days of July, we have witnessed quite a number of attacks already.”

“These attacks are lamentable as our church members have continued to be killed, others displaced, and church buildings and houses destroyed,” he said.

Christian communities in Riyom and Barkin Ladi in May informed police through a letter that armed Muslim Fulani herdsmen had established a camp in the area and were planning to carry out more attacks on their communities, a source said. In the letter, the Christians pleaded with police and other security agencies to protect them. The camp, the Christian villagers reported, was located in the hills of Riyom, near Jos.

“We discovered the camp of the Fulanis, and we have informed the police command about it, yet nothing has been done to stop the killing of our people,” a Christian resident of the area told Morning Star News.

Like the Fulani, the Hausa people of northern Nigeria are predominantly Muslim and have become increasingly antagonistic toward many Christians along tribal, economic and political as well as religious lines; at the same time, observers note, for Muslims politics is of a piece with religion. A Borno state-born pastor working in the northeast state of Yobe was attacked while visiting Kaduna state on April 13 by Muslim youths apparently upset by elections at that time, and they made their anti-Christian sentiments known.

“They called me an infidel and attacked me,” Pastor Emmanuel Danjuma of the Redeemed Christian Church of God (RCCG), Yobe State, told Morning Star News from his hospital bed, still writhing in pain four months after the attack.

Pastor Danjuma said the local Hausa Muslims clubbed and stabbed him several times in Saminaka, Kaduna state, as they rampaged through the town attacking non-Hausas presumed to have voted against their wishes. Before he lost consciousness, he said, he saw a Hausa man dressed in white rush up.

“The man shouted at them and ordered them to stop attacking me,” he said. “I don’t know what happened then, as next I only found myself in a hospital in Saminaka town. After a few days my situation deteriorated and I was transferred to this Christian hospital.”

With an ongoing national medical strike since May paralyzing public hospitals, Pastor Danjuma has remained at Seventh-day Adventist Hospital in Jengre, near Jos, Plateau State, struggling to survive after coming out of coma.

A Roman Catholic priest in the area said at least five Christians were killed in the town on the day of the attack. He gave their names as Habila Daniel, Danlami Gaba, Michael Timothy, Stephen Galadima, and Joshua Akpama.