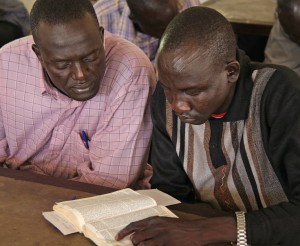 Sudan (MNN) — The final hearing of South Sudanese pastors Yat Michael Rout and Peter Yein Reith will be on August 5. The results could lead to the death penalty.

Ranked #6 on the Open Doors USA World Watch List, Christian persecution is nothing new to Sudan.

Morningstar News reports that on December 2, 2014, police in North Khartoum beat, arrested, and fined 38 Christians. They were released that night.

Pastor Michael was invited to encourage the church to stand firm despite the persecution. But after giving a sermon on December 14, 2014, he was arrested and detained.

Christian News reports that several weeks later, Pastor Reith was arrested for submitting a letter from leaders in the South Sudan Presbyterian Evangelical Church that asked about Michael’s whereabouts.

The pastors have been charged with committing crimes with other churches, spying for outsiders, and collecting and leaking information of Sudanese national security. Two charges include the death sentence.

“Almost all pastors have gone to jail under the government of Sudan,” said Reverend Tut Kony, a fellow pastor. “We have been stoned and beaten. This is [the Sudanese government’s] habit to pull down the church. We are not surprised. This is the way they deal with the church.”

Since President Omar al-Bashir promised to adopt a stricter version of Islamic law in 2011, Christian persecution has intensified greatly. Often times, accusations are false, and arrests or trials are illegal.

Open Doors reports that one of the defending lawyers, Thabith Al Zubir, asked the judge to drop the case because there was no clear evidence and the clients had been arrested illegally. He also said the two were illegally detained for a long period of time without any form of trial for insulting religion.

“To urge believers to be zealous for their church is not an insult against God,” Zubir said.

While the defense argues that there is no clear evidence, Christian News reports the judge appears to be in favor of the prosecution. But that’s no reason to give up hope and stop praying.

Just as these pastors have been tested, so was Meriam Ibrahim, a Christian who was pregnant when she was put on death row last year. But as the world knows, fervent prayers led to her release.

Open Doors now asks for your prayer before, during, and after Pastor Michael and Pastor Reith’s final hearing on August 5. Every prayer speaks volumes and could help in saving their lives.