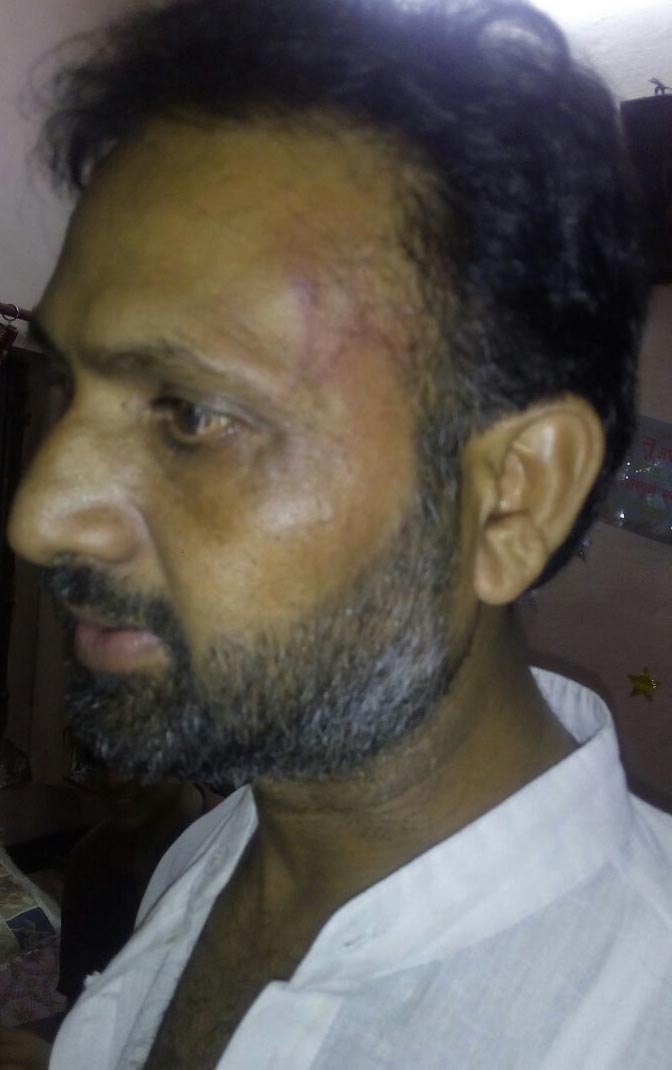 NEW DELHI, July 29, 2015 (Morning Star News) – After watching idly as a mob of Hindu extremists dragged Christians from a prayer meeting in West Delhi and beat them, police questioned those who were attacked as if they were guilty of fraudulent conversion, sources said.

A mob said to be members of the Hindu extremist Rashtriya Swayamsevak Sangh (RSS) stormed the prayer meeting in Nangloi, Nihal Vihar on July 18 and beat them, leaving one Christian with a damaged eardrum, they said. Police watched without intervening, and initially officers refused to register a case against the assailants, Christian leaders said.

Three pastors had gathered at the home of Ayaid Prasad to pray for his sick daughter when about 15 Hindu extremists accused them of forceful conversion as they barged in with clubs at about 4 p.m. They shouted at the Christians to stop the meeting and beat pastor Harchand Singh and two guest pastors from Kerala, Pastor Singh said.

West Delhi is an administrative district of the National Capital Territory of Delhi. Also present at the prayer meeting were 13 other Christians.

“They pulled us out from the house to the road and beat us up where another 50 extremists were waiting,” Pastor Singh of Shalom Mission told Morning Star News.

The owner of the house tried to tell the Hindu extremists that the pastors had come at his invitation, and that they had witnessed improvement in his daughter’s health after prayer, but the assailants continued to kick, punch, slap and beat the church leaders with clubs, Pastor Singh said.

The attackers claimed that Prasad’s family had been forcefully converted to Christianity, said A.C. Michael, former member of the Delhi Minorities Commission.

“The extremists claimed that Prasad now put up the picture of Jesus in his house, and they angrily demanded to know why he took off the picture of Hindu god Hanuman from his house,” Michael told Morning Star News.

Police took Pastor Singh and the two other pastors to the police station, the pastor said.

“The police asked us uncomfortable questions, like how much money we offered to people to convert them to Christianity,” Pastor Singh said.

Police released the pastors at about 9 p.m., claiming that they had kept them in custody for their own protection, attorney Pramod Singh of the Christian Legal Association (CLA) said.

When another pastor, Rajan Gill, led a group of Christians to the police station to help the pastors in custody, the Hindu extremists beat them there, Pastor Gill said.

“Hurling verbal abused against us, about 15 extremists rushed towards me and started to push, kick and slap me, and they tore my shirt and beat me up,” he said. “When one church member, Ranjinder Masih, came to defend me, he was mercilessly beaten up.”

They beat Masih, 36, for about 15 minutes before police intervened, he said.

Pastor Gill sustained bruises and abrasions on his body. Masih suffered a serious eardrum injury as well as wounds on his face and neck, Pastor Gill said.

After about 400 Christians staged a protest in front of the police station against police inaction the next day, police filed a First Information Report (FIR) against the assailants.

“The police on duty seem to have a soft side for the attackers, and it was only when we approached the Additional Commissioner of Police that a case was registered against the attackers of Pastor Harchand Singh,” attorney Singh of CLA told Morning Star News.

The Station House Officer of Nihal Vihar, Sharad Chandra, refused to comment on the case to Morning Star News.

Michael said the Delhi Minorities Commission is submitting a memorandum to the lieutenant governor of Delhi demanding justice and prompt police action.

“One police inspector from the special branch did not talk like a police officer, but like that of an RSS member, and we were deeply saddened that the police were mute spectators of the beating and the utterance of their duty not pertaining outside,” Michael said.

Attacks in the Area
The same anti-Christian elements in the area have been harassing pastor Praveen Kumar of New Life Fellowship since March of last year.

In March 2014, church members from New Life Fellowship were on a bus to attend an evangelistic convention when local leaders Vinod Singh, Sanjay Sharma and Om Pal led RSS members in stopping them and slapping some of them, Kumar said.

A police complaint was filed, but no action was taken, he said.

“I have been to the police station at least four times, but police did not take any action,” Pastor Kumar told Morning Star News. “They made the excuse of not being able to identify the culprits. However, I told them many times that I can help them in identifying the people who troubled us, and I have even mentioned the names of the attackers, but they refused to comply.”

Singh of the CLA said the police investigation has been inadequate.

“It is sad that the police did not take corrective actions, and that there was no proper investigation into the matter,” he said. ‘The police inaction has emboldened the behavior of the extremists in the area.”

“The RSS clad in their uniforms stopped some church members on their way to the church and chased them back to their homes,” Pastor Kumar said. “They teased and uttered vulgar words to the ladies from our church and deliberately offered prasad [food offered to idols] when the congregation came out from the church.”

Christians submitted police complaints nearly every Sunday, but no action was taken, he said.

“The Station House Officer at that time was B.R. Sangla, and every time we asked for his help, he said that we were the ones creating trouble, and he threatened to lock us up,” Pastor Kumar said. “Finally, one member of the National Minority Commission, Abraham M. Patiani, helped us out by addressing our issue to the Deputy Commissioner of Police, who told the anti-Christian people not to bother us again.”