Nigeria (MNN) — On Sunday afternoon a motorized rickshaw pulled up in front the Redeemed Christian Church of God in Potiskum, the capital of Yobe state in Nigeria. The driver was a suicide bomber allegedly sent by Boko Haram. The explosives detonated after the bomber entered the building, killing five members of the church.

Open Doors say the bomber was disguised as a worshiper, and although officials insist it was a male bomber, witnesses claim it was a woman. Traumatized congregation members reported seeing the explosion originate from her but were too afraid to give a name. 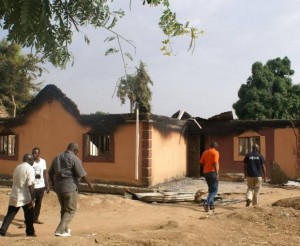 The explosion killed six in all: the bomber, the church pastor, a mother and her two children, and one other congregation member. Four worshipers died instantly, the last succumbing to her injuries later in a local hospital.

The building was under construction, but after the devastation of the explosion, it will have to be rebuilt–not only as a building but as a church of believers. The congregation will be forced to find a new pastor in the midst of the chaos

Although Boko Haram has not actually claimed the attack as of yet, Potiskum has been attacked repeatedly. As the church is situated just on the outskirts of the city, it wouldn’t be a stretch to source yet another suicide bombing to the insurgent group.

As Boko Haram continues to launch attacks against believers across Nigeria, Open Doors is asking you to pray for the situations surrounding the assaults. In some situations, local Muslims are even blaming Christians for some of the attacks. Nigeria is already #10 on the Open Doors World Watch List for countries where persecution against Christians is the most severe, and it could quickly rise in rank if the terrorism and religious extremism doesn’t stop.