Al Shabaab Mounts another Attack on Non-Muslims near Mandera, Kenya

At least 17 killed, 11 injured. By Our East Africa Correspondent 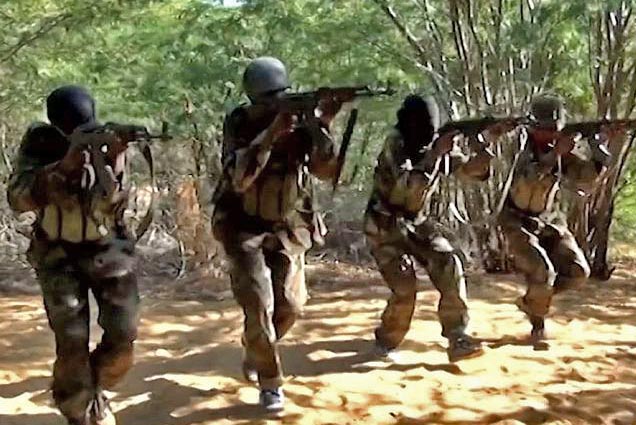 The attack in Soko Mbuzi, near Mandera, took place at about 1 a.m. as the workers slept in tents outside two houses their employer rented for them, an area Christian leader told Morning Star News. As in previous attacks, the Islamic insurgents targeted migrant workers from the Kenyan interior who were non-Muslims, he said.

At least one of the 17 dead belonged to the East Africa Pentecostal Church (EAPC), and five others were Catholics, he said. Among 11 people injured, at least two were EAPC members.

“I visited one of the EAPC members at Mandera General Hospital, and he suffered multiple injuries – fractured hands and legs, with a stomach injury,” said the source, who requested anonymity. “He needs specialized treatment for him to survive.”

Al Shabaab took responsibility for the attack, in which the assailants planted an explosive near the houses. After it exploded, the assailants then set the tents on fire and shot at workers rushing out.

“Those who survived were found by police in a pool of blood,” the source said.

The source said most of the 17 people slain were from Nyeri County in central Kenya and were between 25 and 45 years old. One Catholic family in Nyeri lost five of their grown children, including two identified as Samuel Kinywa and Zacharia Wambugu. A Catholic bishop identified only as Ibrahim in one of the villages in Nyeri said relatives were wailing in mourning after receiving the bodies of those killed.

Some of those killed were inside the houses near the tents, the area source said.

“Given the way the attackers entered the area where they mounted the attack, it is clear that the attackers knew the area very well,” he said. “Hence we cannot rule out that among the attackers are local Kenyans who have been radicalized into the militant terrorist group.”

The assailants fled after security units arrived at the compound where about 150 workers were sleeping.

In December of last year Al-Shabaab militants shot dead 36 non-Muslim quarry workers at the Koromey quarry in the same area, following a November attack that killed 28. In those attacks, they separated out Kenyan Christians from Somali Muslims.

Al Shabaab, which has ties to Al Qaeda, has cited retaliation for Kenyan military involvement in displacing the Islamic extremist militants from Somalia as one reason for prior attacks. In 2011 Kenya joined African Union forces battling the Al Shabaab insurgents after a series of Somali attacks on tourists and other targets in northern Kenya, and since then Al Shabaab or their sympathizers have carried out several retaliatory attacks on Kenyan soil.

After the December 2014 attack near Mandera, the Kenyan government came under intense pressure to increase security in the area.

“Despite the heavy Kenya Defense Force presence in this region, this Al Shabaab knows how and where to find the non-locals,” the source said. “I thought the quarry workers were safe, only for them to meet their death in such a brutal manner. We need prayers and God’s protection for our churches in this volatile area bordering Somalia, where selective attacks have been taking place.”

Schools have been closed down, and fear has again gripped the people of Mandera, he said, adding, “especially non-locals are very shaken.”

The population of Kenya is 83 percent Christian, though only 7 percent are active in churches, according to Operation World. Only about 8 percent of Kenya’s population is Muslim.

Al Shabaab took responsibility for the assault on the Westgate Shopping Mall on Sept. 21, 2013, which killed at least 67 people with dozens still unaccounted for. The assailants killed those they could identify as non-Muslims.

Al Shabaab rebels attacked a predominantly Christian town on Kenya’s coast on June 15, 2014, selecting out Christian males as they killed more than 57 people. The estimated 50 Al Shabaab militants attacked two hotels, a police station and other buildings in Mpeketoni, in Lamu County, about 100 kilometers (60 miles) from the Somali border, in a five-hour assault with guns and grenades.

Sources told Morning Star News the assailants were chanting “Allahu Akbar [God is Greater]” and killing whoever could not recite verses from the Koran. Al Shabaab took responsibility for the attack, saying it was to avenge Kenya’s military involvement in Somalia and the killing of Muslims.

On March 23, 2014, gunmen entered a Sunday morning worship service in Mombasa County and sprayed the congregation with bullets, killing at least seven Christians and leaving several others in critical condition. Two heavily-armed men wounded more than a dozen of the 200-member Joy in Jesus Church in the Likoni area of Mombasa, where a mosque said to have ties with Al Shabaab has caused tensions.

No one has taken responsibility for the attack, which reportedly involved a third gunman outside the church building shooting at Christians fleeing the attack. Church leaders suspected Islamic extremists had carried it out in reprisal for a raid by armed police on the Masjid Musa Mosque (now Masjid Shuhada, or “Martyrs Mosque”) on Feb. 2, 2014, in which more than 100 Muslims were arrested and at least two were killed; most of those detained have been released.

Suspected Islamic extremists likely killed Lawrence Kazungu Kadenge, 59, an assistant pastor at Glory of God Ministries Church, in the Majengo area of Mombasa on Feb. 2, 2014, for sharing his faith near the Musa mosque and alerting authorities to security threats, sources said. Some youths reportedly raised the black flag of Al Shabaab at the mosque that day, when the raid by authorities touched off riots.