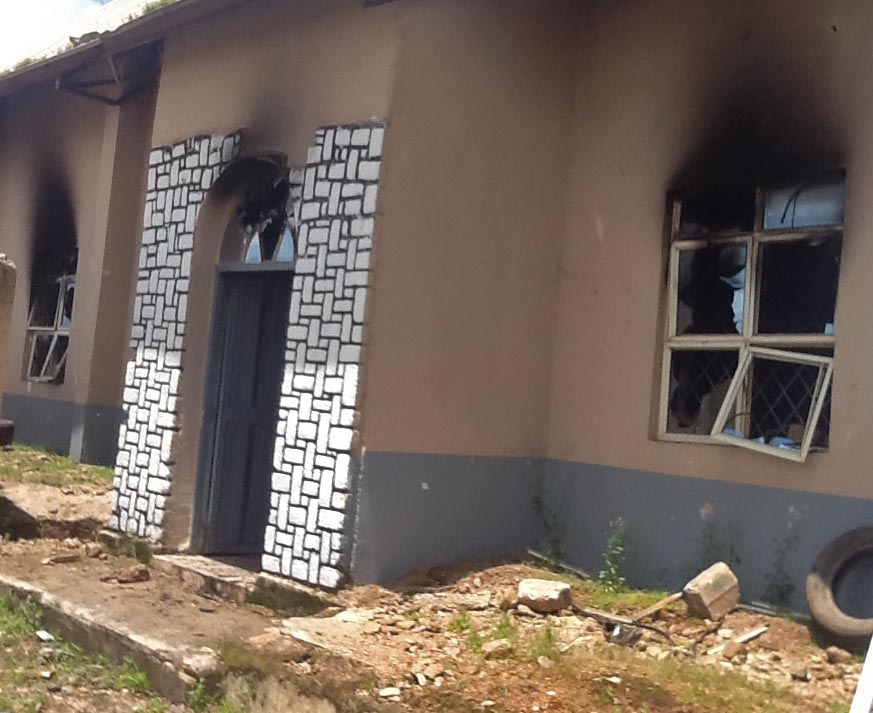 JOS, Nigeria, July 7, 2015 (Morning Star News) – At least five Christians were killed in northeastern Nigeria over a weekend of violence capped by a twin bombing in Jos that led to attacks on two church buildings on Sunday night (July 5).

In Potiskum, Yobe state in the northeast, Islamic extremist group Boko Haram was suspected in the suicide bombing on Sunday that killed a clergyman and four worshippers at the Redeemed Christian Church of God, police reportedly said. The dead reportedly included a woman and her two children.

Muslim extremists also reportedly killed nine people in several villages in Borno state over the weekend. The Associated Press reported that 32 church buildings were burned down along with about 300 homes in the attacks.

Boko Haram, which seeks to impose sharia (Islamic law) throughout Nigeria, was suspected in the twin bombings in Jos, in the north-central state of Plateau, which one source reportedly said killed at least 51 people; officials put the death toll at 44. A suicide bomber detonated explosives at a mosque where a moderate imam known for advocating peaceful relations among religions was preaching, and a second bomb exploded at a crowded restaurant. At least 67 people were injured, officials said.

Shortly after the explosions in Jos, what appeared to be ordinary area Muslims attacked the Evangelical Church Winning All (ECWA) Good News Church, which is near the bombed mosque, and the St. Michael’s Parish of the First African Church Mission. The attacks on the two church buildings occurred at about 11 p.m.

The Rev. Isaiah Oluwagbayibi, pastor at St. Michael’s, told Morning Star News that he was at a loss to understand how the bombing of the mosque should lead to the gutting of his church building.

“A bomb exploded in a mosque, and then they came to burn down our church – what has our church got to do with what happened in their mosque?” he said. “Are Boko Haram terrorists members of our church? Why are they doing this to Christians in northern Nigeria?”

The pastor said the assailants looted and burned shops owned by Christians, while leaving shops of Muslims intact.

“We love Muslims and have shown love to them in practical ways, but in return for our love for them, they repay us with evil attacks,” he said. “Why so?”

The church building has been ruined three times before Sunday’s destruction. Since he arrived as pastor in 2012, he said, Islamic extremist attacks have caused members of his church to flee the area, reducing the congregation from 500 to about 20.

“I reported as the pastor of this church in March 2012, but prior to my coming, this worship auditorium was destroyed thrice by these Muslims,” he said. “When I came, the church was completely destroyed. I had to write letters of appeal to other Christians soliciting funds to carry out major repairs. We’re only able to worship here on Sunday under protection from the police. Right now I can only estimate that the destruction done to the church is about 5 million naira [US$24,800].”

When he went to the church property to examine the damage Monday morning (July 6), a large crowd of Muslims was still loitering about the burned structure, and he could not enter, he said.

“I called the church warden and a member to accompany me to the church,” he said. “We eventually entered the premises and saw the destruction inside the church. As you can see, the pews, the chairs and equipment inside the church have been destroyed.”

He went to police to request that officers be stationed at the site for protection so that leaders might salvage what they could from the ruins, but officers declined, the pastor said. He appealed to the Nigerian government for security and to assist in reconstructing the church building.

“I was expected to have moved into the pastor’s house within the church, but could not do so as there was heightened tension in the country prior to elections last April,” he said. “If I had moved in as earlier planned, myself and my family could have been attacked last night when these Muslims stormed the church. It was divine providence.”

The First African Church in Jos at that location was first established in 1891.

The pastor said that each time his church has been attacked, neighborhood Muslims would visit and promise to prevent further attacks, but to no avail.

“This cycle of vicious attacks on the church has continued even without the slightest provocation from Christians,” he said. “We do not know what else we can do in order to avert such attacks on our church. I must tell you that we are helpless.”

The Rev. Joshua Tuwan, pastor of the ECWA Good News Church, told Morning Star News that on Monday morning (July 6) he found tires in the building that assailants had intended to burn.

“On Sunday night we pleaded with the security agencies to intervene to save our church from being destroyed,” he said. “Quite a number of window glasses were destroyed. The quick intervention of soldiers led to prevention of major destruction on the church building by the Muslims.”

He learned that soldiers shot guns into the air in order to repel a large crowd of Muslims bent on burning the church down.

“We really appreciate the efforts made by the soldiers to stop these Muslims from destroying the church building,” Tuwan said.

The 49-year-old pastor said the church has been under pressure from the Muslims the past 14 years, and that it was attacked in 2008.

“We’ve been forced to insure this church building instead of using the funds for missions, for we do know that the church has become an object of attack by the Muslims,” he said. “And it is our desire that no matter the pressure, the hate, and the threat from these Muslims, we intend to ensure that the church remains standing in this place until Jesus comes.”

At the end of the Islamic Ramadan fasting period in 2008, hundreds of Muslims stormed the church building after mosque prayers, overpowered security men and set it on fire, he said. Christians who had run into the church auditorium for safety escaped before the building was ruined.

“No support came from the Nigerian government to enable us rebuild the church building, but through members’ contributions, the building was rebuilt, and now the attempt to set fire on it again,” he said.

The ECWA Good News Church was established in 1926.

Tuwan, who is also vice chairman of the Jos District of the ECWA, said he hoped the Muslim assailants will come to love Jesus Christ.

“He really loves them, and He is the real author of peace,” he said. “I have always prayed that Muslims in northern Nigeria would know Jesus, and I know that it shall come to pass as these same Muslims who are destroying the church of Jesus Christ, would have their children one day becoming followers of Jesus, and they shall use their resources to build the churches they are now destroying. That is my prayer for them, and we love them.”