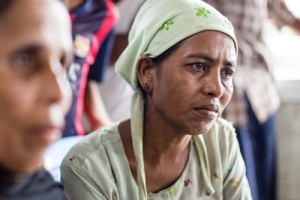 The Rohingya are refugees with no country and no hope.

Indonesia (MNN) — Over the last couple of months, we’ve reported stories of the Rohingya: people without a country, driven out of Myanmar. Refugee camps struggle to support their needs. Many are desperate, including young girls who begin searching for hope through prospective jobs. Many of them end up victims of human trafficking.

Partners Relief and Development is intimately involved in helping them.

Two weeks ago, a Partners team was in Aceh, Indonesia to see how they could help the Rohingya refugees who had just arrived by boat. They were heading to Thailand at the mercy of human traffickers. When Thailand closed their border to refugees landing on their shores, the traffickers were left with few other options. After abandoning their human cargo at sea, they fled to safety in speedboats.

The Rohingya refugees were left stranded, floating at sea with no food or water. Eventually they were found by Acehnese fishermen and brought to shore. Among the Rohingya refugees were 6 teenagers from the village Partners has been helping the most. One of them was killed at sea and his body thrown overboard. The other five arrived in Aceh and were living in a warehouse near the pier where they came ashore.

For three long years, Partners has been working with the displaced Rohingya living in camps outside Sittwe in western Myanmar. Much of their work has been with one particular group of unregistered people. They have become friends. This is the reason they searched among the refugees in Aceh for anyone from this group. This was how they found the five teenagers.

Through a translator, the Rohingya told their story. They had spent more than four months at sea. Many were were beaten and killed on the way. They were crowded in the hold below deck with hardly any food or water. They were forced to live in their own filth. They described how their friend had been killed. They shared the story without emotion. One of the girls was only fourteen.

The Partners team had very little to offer the refugees. They showed them pictures of their families and friends in the camps back in Myanmar. They then asked if they’d like to talk with them and let them know they were safe. They were given a phone and watched as they showed emotion for the first time. As the call was connected, the Partners team watched as they laughed and screamed as they heard their family members on the other end. It wasn’t clear what they were saying, but it was clear they were enjoying the moment: their first moment of joy in a very long time.

Today the Partners team is back at the camps near Sittwe. While here, they visited their families and showed them pictures of their children so far away in Aceh. They met the mother and sister of the 14-year-old girl, showing them pictures and also a video. Both began to sob.

Five months earlier, the 14 year-old was going to visit her uncle, just down the street. Instead, she left the camp with her 5 friends on a boat for Malaysia. Her mother didn’t see her again until she saw the video today.

What causes six teenagers to steal away and risk their lives at sea, at the mercy of human traffickers? Hundreds of thousands of Rohingya have no rights, no hope, no future. Young people are taking risks to find hope. Those leaving know the risks. You know it’s hopeless when a 14-year-old girl would rather run away from home and risk torture and death at sea than to stay in a camp.

Because of that hopelessness, Partners is sharing hope–hope that comes from one place: Christ.

The Rest of the Story from Partners Relief & Development on Vimeo.