What now for Nepal? 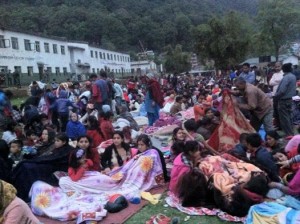 Nepal (MNN) — It may sound cliché, but the needs in Nepal extend far beyond the images we see on multimedia platforms.

To get the full scope of it, you need to see the rubble everywhere you look, smell the odor of dust mixed with something cloying, feel the roughness of the debris that you move out of your way, hear the sounds of workers breaking up concrete, and taste the emptiness of hunger.

There are few places to get in out of the sun. Tents are warm inside and out, the air feels heavy with the coming rains. Rain means cold mud…everywhere.. Every once in a while, there might be a tremor—just enough to make you wonder if you’re dizzy, and then you look up, just to make sure nothing is going to fall. “Villages look like World War II after they had been bombed. It was completely devastated–whole villages,” says Patrick Klein of Vision Beyond Borders, describing the landscape. 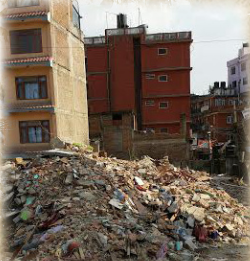 The preceding paragraph is somewhat a compilation of experiences reported by many people who have recently been to Nepal with a relief team since the April 25 temblor. Klein just returned from a visit with a team. “They brought a lot of tents in–a lot of tarps to set up for the monsoon season. They’re also working in the villages, trying to sort some of the bricks out, break off some of the concrete on some of the [buildings] so they can begin rebuilding.” He goes on to say another need is for vitamins, both for children and adults. There will likely be minimal access to fresh foods for a while, as the fresh fruits and vegetables may have to be hand-carried over the mountains. Vitamins and basic medical supplies will be in high demand, as will water filtration systems.

The rebuild seems like an insurmountable task. Lack of funds plus a short time frame add to the pressure. “Getting through the monsoon season is going to be the tough thing. When I was there, it started to rain, and it POURED. It was unbelievable. It actually hailed in some places, so we’ve got to try to get people under shelter as soon as possible. They’ll probably be getting a lot more tarps, tents set up, and even some temporary metal structures.” 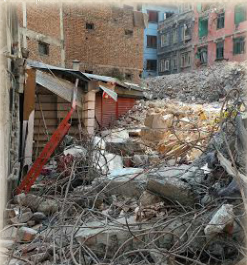 There is also another experience paralleling the disaster. This one is also true of the mission groups on the ground, partnering with the local Church. It’s called “opportunity,” says Klein. “Here were Hindu and Buddhist people that normally would not be open to help from Christians. They were very receptive. Everyone came and said, “Thank you.” Everyone. That might be due, in part, to questions that are coming in the wake of the disaster. “They’ve seen many of their temples collapse, many idols have been smashed, or, in some situations where these temples have been destroyed, people have actually looted the idols.”

VBB is already known in some of the areas where they’re sending relief. They have 5 children’s homes and one safe home for women who have been rescued from sex-trafficking in Nepal. Because their approach to aid comes with hope, “It’s a great time for the Church–for God’s people to be sharing the Gospel. Then, if people want to continue to financially give, we’ll make sure those funds will get there to Nepal and will keep being used to provide food and shelter for people that have been directly affected by the earthquake.” 100% of all donations to the VBB Nepal Disaster Relief Fund support relief efforts.