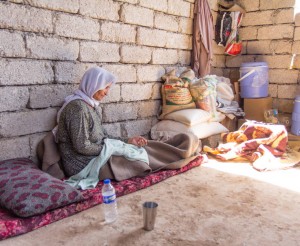 Middle East (MNN) — Women and girls kidnapped by ISIS are living a nightmare. Girls as young as 9 have been brutally tortured and raped, and they suffer both physically and mentally.

Open Doors USA is sharing God’s Word, encouraging these ISIS victims, and praying for the release of those who are still in captivity.

According to RT News, the use of sexual violence is a way to punish and demoralize local populations, making it easier for ISIS to get information and displace towns and villages.

In other words, these women are being treated like animals for further destruction in the Middle East.

“[They are] categorized and shipped naked off to Dohuk or Mosul or other locations to be distributed among ISIS leadership and fighters.”

Many women aren’t sold once to militants, but multiple times. Each time they must undergo a painful “virginity restoration” surgery.

Bangura reported one woman was married off and had the surgery 20 times.

Even more sickening, a 9-year-old child was raped by ten men: now she is pregnant.

“The girl is so young she could die if she delivers a baby,” said Canada-based aid worker, Yousif Daoud. He added that she is mentally unstable and physically traumatized.

Many of these women released by ISIS have come back to their towns and villages pregnant. “Sending back those girls and women is a way of shaming the whole community,” said Daoud.

According to the Daily Mail, women are ashamed and trying to hide the proof of their rape. They’re going as far as illegal abortions and “virginity restoration” surgeries.

No matter the amount of surgeries, these women and girls are still scarred. They have been psychologically damaged.

Rudaw reported 18 Yazidi women who escaped are being flown to Germany for intense psychological treatment. They’re the first of 1,000 to be treated.

Only God can completely heal them.

Open Doors reported the story of one woman who was continually raped for months and finally dumped in a city outside of an ISIS camp. She was taken care of at a monastery, but totally confused; she couldn’t remember who she was, would only wear dirty clothes, and refused to eat anything.

Open Doors is providing medical attention, trauma counseling, and other vital resources for her and others like her.

Join Open Doors in prayer for this woman, as well as the thousands of women and children hurt and scarred by ISIS.

Pray For:
• Physical and mental healing.
• The women and children who are pregnant.
• Victims to look to God and find Him to be the ultimate healer.