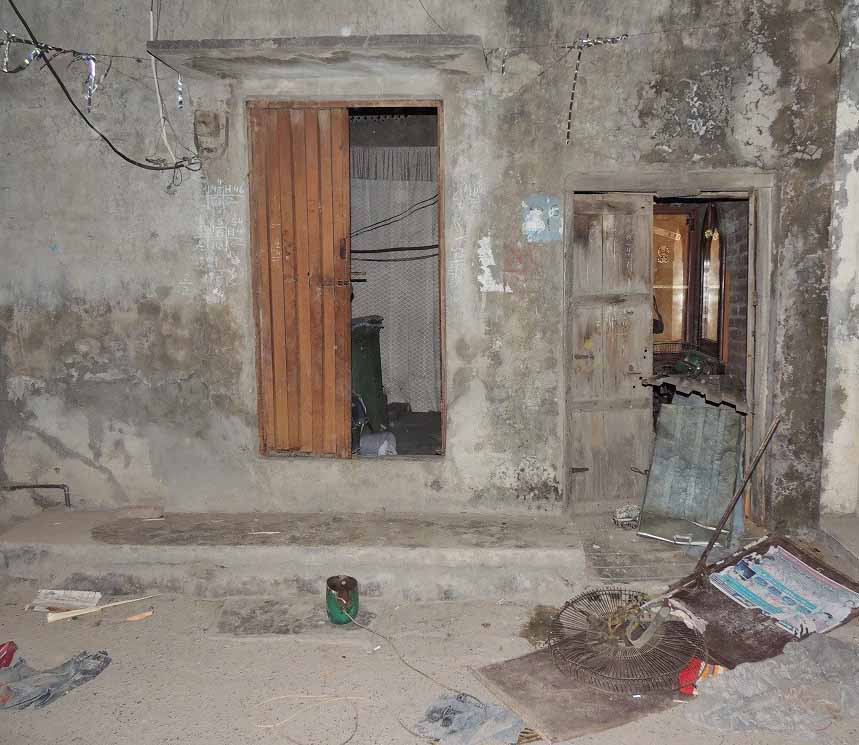 LAHORE, Pakistan, May 26, 2015 (Morning Star News) – Christians in Lahore are on edge after hundreds of Muslims attacked houses and a church building on Sunday night (May 24) in response to accusations that a Christian set fire to papers with koranic verses on them.

Chaudhry Alam Masih, a resident of Dhoop Sari in Lahore’s Sandha area, told Morning Star News that at 7 p.m. on Sunday evening more than 500 Muslims gathered in front of the house of his mentally challenged neighbor, Humayun Faisal Masih, after the latter was accused of setting the papers on fire.

“They were very charged up, and some of them were carrying weapons,” the neighbor of the accused said. “They were raising religious slogans and demanded that Masih should be handed over to them so that they could burn him the same way he had allegedly burned the holy pages.”

The neighbor and his family locked themselves in a room of their house as the mob started pelting stones at their home and those of other Christians, he said.

“They also tried to break into our homes and broke open several doors of nearby houses,” he said. “The protestors carrying weapons fired into the air, spreading more panic among us.”

The mob sought to burn down their homes and the nearby St. Joseph’s Catholic Church building, but intervention by police and local administration saved them from the mob’s fury, he added. A St. Joseph’s leader reportedly said the church was vandalized.

“Although the police had taken Masih into custody and moved him to the Ravi Road Police Station, the mob seemed hell-bent on punishing the entire Christian community living in the area,” he said, adding that most of the more than 200 Christian families in the Dhoop Sari neighborhood had abandoned their homes, fearing for their lives.

Many Christian families fled their homes as soon as news of the alleged desecration spread in the area, he said.

“Some of us who couldn’t leave were forced to stay indoors, helpless and uncertain about our fate,” he said.

The mob refused to listen to police orders to retreat and instead started pelting security personnel with stones, he said.

“The number of the protestors kept growing, and we could see pitched battles between the mob and policemen from our windows till late at night,” he said. “This all was happening in the presence of the chief of the Lahore Police’s Operations Wing.”

By loudspeaker, District Coordination Officer (DCO) Capt. Muhammad Usman, who is also head of the local district administration, repeatedly urged the crowd to back away since the accused was already in custody and a case had been registered against him, the neighbor said. The official also urged Christians to remain in their homes, promising that police would protect them.

The DCO’s appeals fell on deaf ears as the frenzied mob resorted to more violence, injuring Lahore Operations official Haider Ashraf, who was hit by a stone in the forehead and had to be hospitalized.

The growing violence forced DCO Usman and provincial Education Minister Rana Mashhood Khan to seek Punjab Province Chief Minister Shehbaz Sharif’s permission to summon the paramilitary Punjab Rangers, and soon two contingents of the force arrived. They barricaded streets with barbed wire, and only then did the mobs begin to retreat at about 3 a.m. on Monday.

The area remained tense on Monday (May 25), with additional police deployed to maintain order. No violence was reported on Monday, but the accused’s neighbour said that Christians could not rule out more attacks.

“In the morning we found out that doors of most of the Christian houses whose inhabitants had fled had been broken down and valuables stolen,” he said. “Several electricity metres installed on the walls were also damaged. This looting and ransacking must have taken place before daybreak, and sadly it took place in the presence of a large number of security personnel.”

He said that Masih was mentally challenged and addicted to drugs.

“He has two children, but his wife is not living with him for the last several months because of his mental instability,” he said. “No one in the neighbourhood has seen Masih desecrating the koranic pages. It’s the complainant’s word against Masih, but I doubt the police would believe the latter even if he hasn’t committed the crime.”

Hizkiel Sahotra, another resident, said he had no idea about any alleged blasphemy until his home came under siege by the Muslim mob.

“Many people showed up outside my house and started chanting slogans against Christians,” he said. “I don’t know what would have happened if police or Rangers hadn’t shown up and chased them off.”

Lahore Operations official Ashraf told Morning Star News that the complainant, Haq, said he witnessed the accused setting on fire a box filled with koranic pages. The Rev. Riaz Arif of the St. Joseph Church reportedly said Masih was accused of burning newspaper pages that had koranic verses on them.

“We registered a blasphemy case against Masih under Section 295-B and placed him under arrest after discovering a box of half-burnt koranic pages in his possession,” Ashraf said. “However, this does not justify the actions of the mob that attacked and ransacked the Christian homes.”

Violation of Section 295-B, defiling the Koran, is punishable by life in prison, which in Pakistan is 25 years.

Shortly after police took Masih into custody, a small mob led by local clerics gathered outside the Ravi Road Police Station and demanded the accused be handed over to them, Ashraf said. After police refused and forced the crowd to disperse, the clerics started walking toward Masih’s home. They attempted to attack houses and a local church, Ashraf said, adding that other policemen also were injured by stones the mob threw.

Haq said that he and others had saved Masih’s life by reporting him to police, as some of Muslim protestors wanted to burn him alive.

“Masih had burned some koranic pages which were placed in a box attached to an electricity pole,” Haq said. “We saw the burnt pages in Masih’s possession, and it was then that the word about the desecration spread in the neighbourhood. Had I not informed the police, Masih would not be alive today.”

Police have registered a terrorism case against Muslim protestors who vandalized the St. Joseph’s church and wounded several policemen deployed there to protect it. A police official said that the case had been registered against 545 mostly “unidentified” people on charges of terrorism and attacking a place of worship.

“Some 500-600 people have been [registered in the case] under terrorism charges for vandalizing the church, damaging public and private property and injuring 10 policemen,” Iqbal Town police official Ijaz Shafi Dogar said.

Dogar said that 45 people were named in the FIR, while others remained “unidentified.” Around 40 suspects have been arrested.

Mob violence resulting from Pakistan’s internationally condemned blasphemy laws has long plagued Pakistan. More than 100 homes were burned in Joseph Colony in March 2013 after one of the residents was accused of disrespecting Islam’s prophet, Muhammad. Shama and Shahzad Masih, a Christian couple, were murdered  on Nov. 4, 2014 on false charges of desecrating the Koran in a village 37 miles southwest of Lahore.

The laws have also resulted in death sentences for Christians accused of blasphemy, including Aasiya Bibi (commonly known as Asia Bibi) and Sawan Masih. Shafqat Emmanuel Masih and his wife Shagufta Kausar were given the death sentence on April 4, 2014 after they were accused of sending blasphemous text messages to a local cleric in Gojra.