Wait out the bloodbath and return home, or end the church's historic presence? 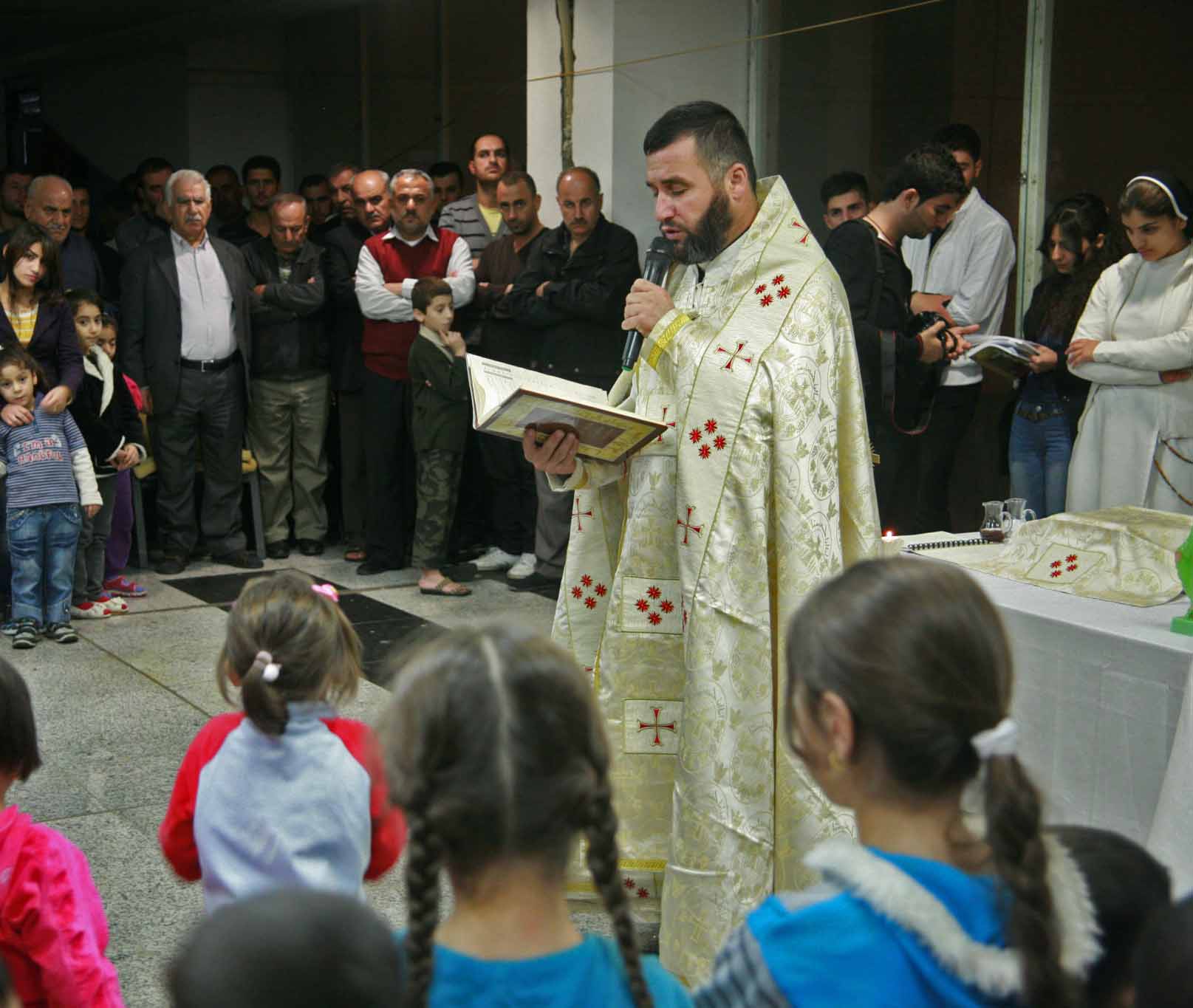 ERBIL, Iraq, December 29, 2014 (Morning Star News) – As he drove across the bridge, slowly following other cars, the scene unfolding around the pastor was complete chaos.

In the distance he could hear mortar rounds hitting their targets as hundreds of other displaced people streamed by one side of his car with whatever they could carry on their backs and hold in their arms. On the other side, terrified Iraqi soldiers were sprinting across the bridge as they stripped off their uniforms and threw their weapons to the ground.

The Islamic State (ISIS) had taken Mosul, and everyone was fleeing for their lives.

Inside the car, the pastor’s two sons were lying flat on the backseat to avoid being shot. As alternating waves of anger, fear and grief swept over him, the pastor drove on, clutching the steering wheel of his car, tears streaming down his face.

“That night was the most afraid I have ever been in my life,” said the pastor, whose name is withheld for security reasons. “Even now when I remember it, I think, ‘How did I do it?’ Only with the Lord, with His help.” 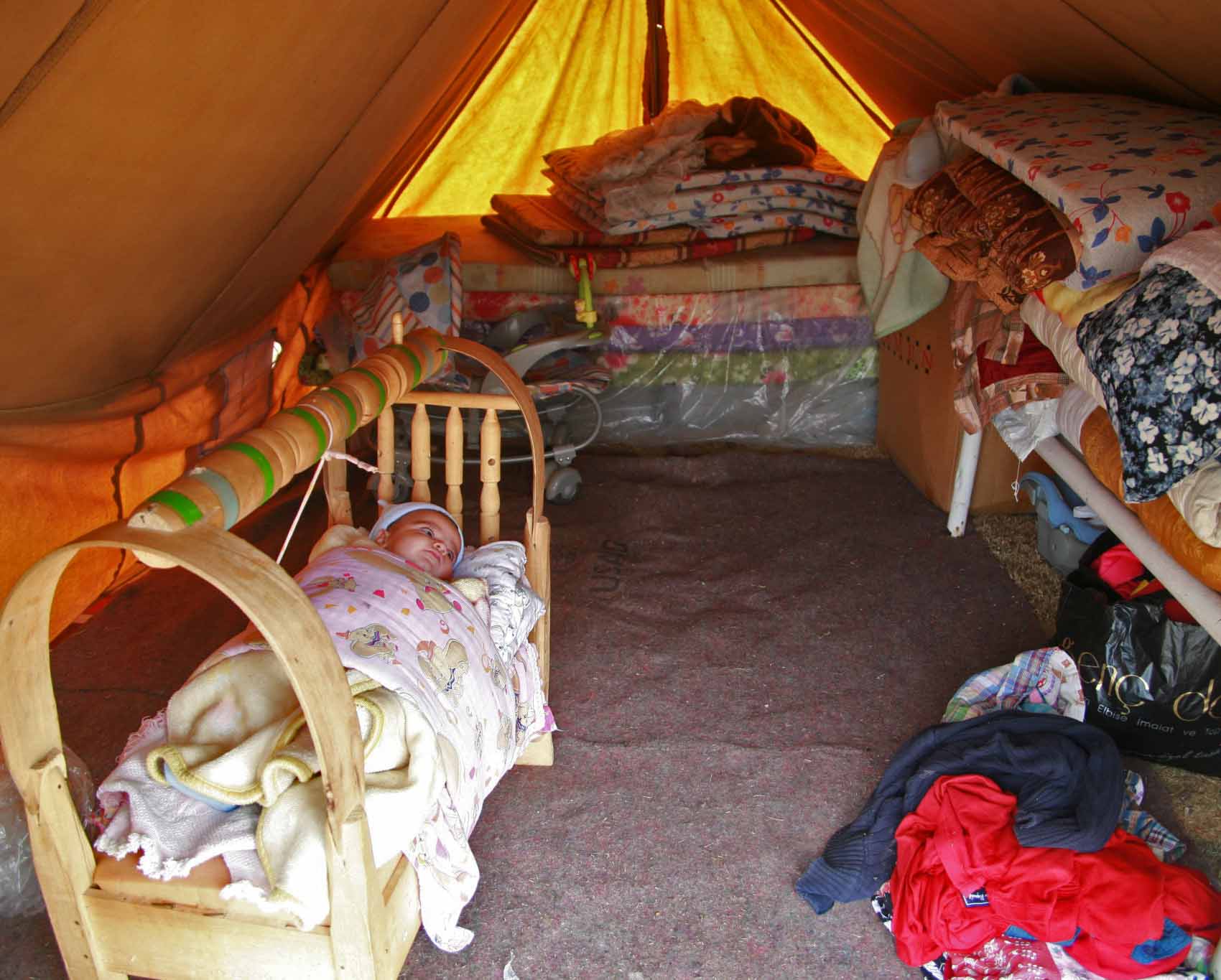 On June 4, after pushing through parts of northeast Syria and northeast Iraq, the Islamic extremist ISIS invaded Mosul, taking it over in five days and sending all Christians, along with anyone else who didn’t agree with its ideology, fleeing for their lives. Two months later, ISIS pushed further south to the cities of Qaraqosh, Karemlesh and Bartella – setting off another wave of displaced people.

The pastor was one of the tens of thousands of those who lost their homes and most, if not all, of their belongings in the process. Most fled to the town of Erbil.

Half a year after losing everything, with their lives still in disarray and the first generation of camp children being born, displaced Christians are asking where their place is in the world. Should they wait out the bloodbath in the Middle East, or should they abandon a region that some say betrayed them long ago and seek out a new life elsewhere?

How to Survive
At the refugee center at Mar Elia Catholic Church in Ankawa, on the outskirts of Erbil, the Rev. Douglas Bazi said he is tired of well-intentioned Westerners who say Iraqis should stay in Iraq to continue its historical Christian presence. He is also tired of people who are naive about Islam.

“We are in pain,” Bazi said. “I am angry because I know Islam very well. In Baghdad they blew up my church. I drove by three bombings, and twice my car was destroyed. I got shot in my leg by an AK-47 – by Islam, and they kidnapped me for nine days.” 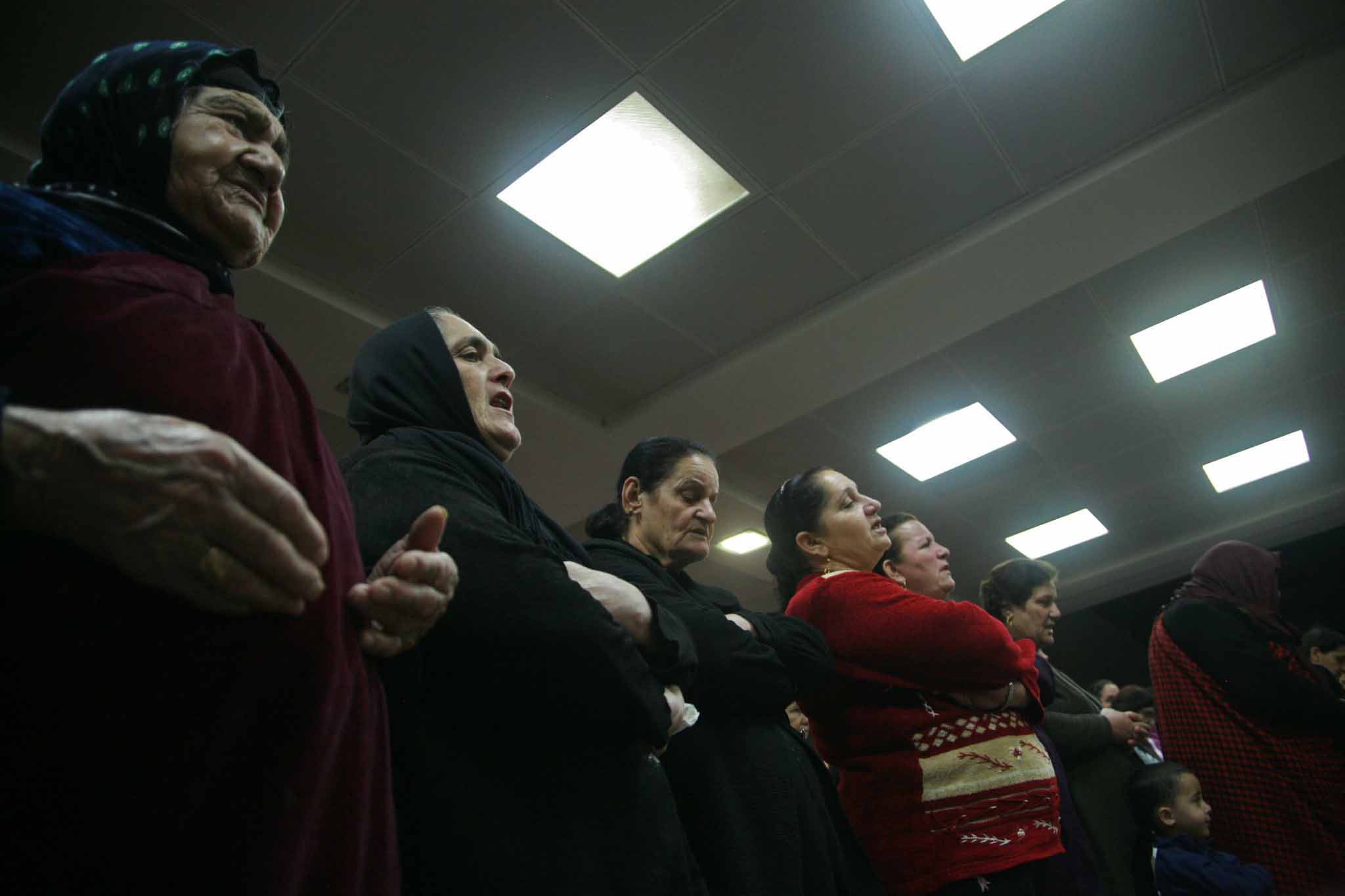 While ISIS fighters have raped, beheaded and threatened non-Muslims in what appears to be a competition with Al Qaeda to see which group can be most cruel, Bazi said that Islamic groups often try to portray themselves as separate from “radical” Islamists. In fact, he said, much of what they believe, and their desire to harm Christians, is the same.

Behind his desk is a wall covered with scores of business cards from people representing aid organizations and other groups from around the world. The cards are arranged into two groups, with about 30 cards on the right and three times that many on the left.

“On the right are the people that really help us,” he said. “On the left are people who just show up, say ‘Hello,’ ask if you need something, and then say goodbye. This is a time of work, not words.”

Among the words Bazi finds most galling are those demanding that Christians stay in the Middle East despite the threats against them.

“I care about my people,” Bazi said. “I don’t care about the ‘Middle East.’ The Middle East for almost 2,000 years has been the same. It’s the same war, the same conflict. So, why do I have to put my people inside that war? Why?”

Bazi lamented Westerners who call him a hero for staying in Western Mesopotamia and lionize Christians who stay in the Middle East “until the last drop of [their] blood” is spilled.

“You know, stop saying those stupid things – it’s just stupid,” he said. “What for? If I lose the last drop of our blood, what is the point of that?”

A woman in the camp, Baidaa Alias, was nine months pregnant when she fled Qaraqosh with her husband and two young boys. She had walked for five hours in the August sun before she arrived at a checkpoint and was placed into a car to Erbil. Her son, Marvin Bashar, was born soon after she arrived at the Mar Elia center. He was one of the first babies to be born to a displaced person at the camp, if not the first.

There are more than 400 children at the center, and they are Bazi’s first concern. Despite classes given at the center, the children will grow up stateless with essentially no education and no skills. Bazi finds that prospect heartbreaking.

“Yesterday I passed one of the tents, and I saw a lady, she’s a grandma, preparing clothes for a new baby to be born,” he said. “I hate myself in this situation. When the new baby comes, what should I write where they put date and place of birth? ‘Tents’?”

For her part, Alias sees “no life” for her or her family in Iraq. Her husband sells vegetables on the street to earn a few dollars each day as she takes care of their children.

“I wish for them to leave to a nice country; we have no future here,” she said.

“Wherever my people can find justice and love, we’d like to be there,” he said. “So it doesn’t matter if it is Darfur or Gaza or Australia or the United States.”

Everyone has the right to dignity and a chance at a good life, he said, emphasizing that he could find no reason for Christians to stay in a place where they hang hand-washed clothes in the cold, shower and use the toilet in the open air, and cannot earn a living.

Robert Duncan, a researcher for the advocacy group Middle East Concern, acknowledged the controversy over whether Christians should leave the region en masse.

Leaders of many traditional Christian denominations have been outspoken about Christian flight from the region, declaring that a Middle East without Christians is “unthinkable.”

“And there’s been quite a lot of pressure on governments, Western governments actually, not to accept asylum-seekers from Iraq for this reason,” Duncan said. “A lot of the people on the ground as individuals have just had enough – it’s different if you’re a church leader and you are seeing things from that perspective compared with that of being say, a father of a family and you’re thinking about what sort of secure life you can have for your young children.”

Ultimately, the decision to stay or leave is the result of many factors, such as a refugee’s religious denomination, previous socio-economic status, age, family ties and level of education. Even language skills can be a factor as the first step to obtaining a work permit in the autonomous region of Kurdistan is speaking Kurdish.

“When you look at the lives of people as individuals, the struggles they have as a family and thinking about the future especially for those with children, then they are much keener on not focusing on the wider vision of the church in the Middle East but on looking more toward their own family and what they can do,” he said. “So you have plenty of individuals who in fact don’t want to stay. They don’t really see any future for them, they are just hanging on by their fingernails.”

Battling Hopelessness
Across town from the Mar Elia church is a commercial building once destined to be mall and a complex of business offices. Known as Bazaar Neshtimony, there a Christian businessman has allowed displaced Christians to take refuge – about 300 families.

The manager of the building, former veterinarian Rabia Soran, is also there as a displaced person. Through great effort and a network of donors, he has set up facilities to make sure that those at Bazaar Neshtimony do not starve, end up on the street, or both.

But for Soran, the complex is about more than feeding and housing people; it is about persuading people who have lost everything that they should stay in Iraq.

“I have been living in Iraq for 37 years, and I made money and built my future, and I made good money – everybody knows me,” he said. “I have friends here; family, heritage and I own land in my town. But in one minute, everything was gone.”

He knows first-hand the hopelessness that people were experiencing.

“For 37 years I worked in this country and in the end, I have nothing,” he said. “So that’s how they think – ‘We don’t need to spend any more of our life here, because it is obviously a lost cause.’ So I thought if I started working hard and provide things for these people and could get every one of them to be as happy as I can make them, then that’s going to take away the idea from their brains to immigrate to another country.”

Most Iraqis, of course, would like to go back to their homes if possible, Ayad Neha said. He lives in the Bazaar Neshtimony complex with his family of five and 21 other people in a three-room office that has been converted into an apartment. Formerly a worker at a cement factory, Naha grabbed his family in the dead of the night and left Qaraqosh to escape ISIS atrocities.

Neha said that despite his losses, he wants to return home, but first he wants safety for his family. Almost all the families at Bazaar Neshtimony feel the same way, he said.

A pastor who ministers to the residents of Bazaar Neshtimony and other places in Iraq
said the problem of ISIS, as bad as it is, shouldn’t push Christians out of the Middle
East.

“You can’t leave your heritage just because you got hurt or a disaster happened. And plus, we’re talking about hundreds of thousands of people,” the pastor said. “How are you going to get all of them out of the country? Jesus said, ‘You are the light of the world.’ If you take that light from the world, what do you think is going to happen here? Where does that put us, where is the message?”

It is understandable that hurting people want to leave the country, he said – people who have suffered losses the war with Iran in the ‘80s, with Kuwait in 1990, the ensuing two Gulf Wars, the deposing of Saddam Hussein and subsequent arrival of Al Qaeda in Iraq and now ISIS.

“All these years, it doesn’t seem like there is hope,” the pastor said. “And that’s why these people are suffering. They don’t have good education. They don’t have good jobs. And every day it’s like you’re sitting here and there’s a thief every day, and he’s calling you and saying, ‘Hey I’m going to kill you, I’m gonna come and take your money, I’m going to come and take your wife, take your kids,’ and threatening you every day and you’re sitting and can do nothing. But as I said, they are the light of the world. If you have a true Christian here and you take him away, who is going to witness?”