A lawyer for the state of Punjab, Pakistan has described the murder of a Christian couple by a mob of at least 500 to 600 as "brutal and barbaric". The post-mortem report on their twin deaths (first revealed in the Supreme Court on Dec 15) showed that both husband and wife were still alive when they were thrown into the brick kiln where they both worked, and that they burnt to death.

Shazad Masih and his wife Shama Bibi, who was five months pregnant, were tortured by an enraged mob over a false accusation of burning pages of the Qur’an; they were then burned to death on

November 4. They were bonded labourers at the brick kiln, which meant that they were unable to leave their home after trouble first erupted, due to heavy debt.

After their deaths, the police arrested more than 50 people and charged them under Pakistan’s Anti-Terrorism Act: ("Terrorism" means "the use or threat of action where … … The use or threat is designed to coerce and intimidate or overawe the Government or the public or a section of the public or community or sect or create a sense of fear or insecurity in society.")

The last four were represented by Supreme Court lawyer Chaudhry Muhammad Arif Sindhu and Dr. Rana Muhammad Shamim (a retired justice of Sindh High Court and ex-Advocate-General and Prosecutor-General of Sindh province), who argued that the last two were only eyewitnesses.

Lawyer Sindhu told World Watch Monitor that the police had arrested Haris Bashir and his brother Usman Bashir because they were eyewitnesses to the negligence of the police, which had allowed the couple to die at the hands of the mob. The lawyer said that Haris Bashir, a university student, had informed the police as a law-abiding citizen.

"Usman Bashir, a Lahore High Court lawyer, went to the police station after Haris called him but the police also arrested him and named him in the case."

Other lawyers came to the defence of their colleague.

"A group of more than 100 lawyers, headed by the Kasur Bar Association President, met with the Kasur district police officer. But he refused [to release Usman Bashir] saying there was pressure from high officials" said Arif Sindhu.

The state itself is the complainant in this case; meaning it’s taken responsibility for ensuring that the perpetrators do not get out of a court case by compromise with, or harassment of, Christians. However, the ATC has also allowed relatives of Shahzad and Shama to have legal representation. The Voice Society, an NGO, represented Shama’s father Mukhtar Masih in court via Riaz Anjum and Tahir Gul. These lawyers argued that the police investigation found Haris Bashir guilty of incitement through hate speech from the mosque loudspeaker, and that he rang the police after inciting the mob, well-aware that he could be at risk of arrest in connection with what might happen next.

The Voice Society Executive Director Aneeqa Maria said the court had rightly rejected all bail applications. "In an earlier incident of arson at Joseph Colony, a Christian area, all suspects were released on bail. This gave the impression that the executive hadn’t provided sufficient incriminating evidence, and that the government was not interested in punishing those responsible for that barbaric act of violence against Christians," she said. 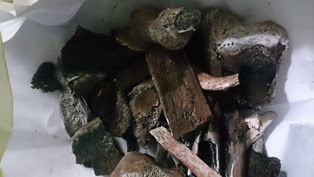 Earlier, on November 22, the Supreme Court of Pakistan took an initiative of its own (known in Pakistan as a suo motu notice) and ordered the Punjab province government to submit a report on the incident.

The police submitted this report on Monday 15th Dec before a three-member SC bench, headed by the Chief Justice of Pakistan Nasirul Mulk.

Five policemen were close by when the couple was being tortured and later burned to death. Mulk said that they could "have resorted to aerial fire to disperse the crowd, to save the Christian couple."

The bench said that the police investigation was incomplete and sought a more comprehensive report. It also ordered the police to take disciplinary action against the five officers.

The police informed the court that three clerics – Mohammad Hussain, Noorul Hassan and Arshad Baloch – had been accused of inciting people through hate speechfrom the mosque loudspeakers, but only Mohammad Hussain had been arrested.

The police report did, however, disclose the fact that "the post-mortem report also reveals that the cause of death of both the victims is burning with dry heat."

Human rights activist Napoleon Qayyum said that this is the first time he has seen the government being serious about bringing the culprits to justice in the case of minorities.

"In the past tribunals, inquiries, suo motu notices etc. were just meant to appease; no one was ever punished."

"After the mob attack in 2009 on two Christian colonies in Gojra in which at least seven Christians died, the government set up a tribunal led by Justice Iqbal Hameed."

"Justice Iqbal’s report was not made public until last year, let alone implementing its recommendations. The justice sought amendment in the blasphemy laws, disciplinary action against the police concerned, establishment of religious disputes’ Resolution Boards and a more efficient information system among intelligence agencies. But nothing has been done on these lines."

"Deterrence against religious extremism will improve only if vigilante justice is discouraged - by bringing instigators to justice, and not by mere notices and inquiries."