Published by Julie Oosterhouse on September 4, 2014 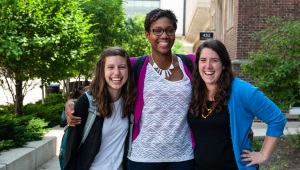 Students are back on campus.
(Photo by InterVarsity Christian Fellowship)

USA (MNN) — Do you ever wonder what it would be like to be a missionary in a closed country? Well, that situation is actually not too far from your front door.

College campuses continue to derecognize any religious organizations requiring leaders to hold a set of beliefs.

InterVarsity Christian Fellowship has been derecognized by all California State University schools. That means 23 chapters of InterVarsity essentially have been kicked off of campus. Read more on that here.

Why it matters to you.

First of all, campus ministries are taking a big hit. Why should you care? Greg Jao of InterVarsity says, “The future leaders of every business, almost every church, ever government institution, every culture-shaping institution of the future, are college students today.”

Jao says that people who care about the beliefs and motives of the future leaders of America should recognize that “if college students encounter the Gospel and have their lives changed, their future will change.”

And not only their future, but the future of this country. And if that’s not enough to catch your interest, consider this: “The issues we’re facing on campus around non-discrimination and how religious may religious groups be is part of a larger conversation that’s occurring all over the country in a lot of different areas–at work places, in businesses, as well as communities.”

InterVarsity sent out a prayer list for the month of September. You can find that here. Jao says we’re not just praying about a couple of Christian groups to be recognized on campus. He says we are praying about how America will engage religious communities and how it will honor religious convictions and traditions in all arenas.

It’s not all bad news

Despite the setback from California State University schools, InterVarsity continues to look to one source for hope: God’s sovereignty.

“For student leaders, confidence in God’s sovereignty means that even though they don’t have official recognition and permission, they’re going to be bold in their witness,” Jao says.

He gives an example from Sonoma State University. Three hours before their big beginning-of-the-year meeting, InterVarsity was told that they didn’t have the right insurance to rent out the room they had paid for on campus. Non-recognized groups must provide insurance policies.

Two hours before the meeting the university came forward and gave the group a limited rider on their insurance policy so that the meeting of around 200 students could continue.

And it gets better. Jao says, “Within a four hour period, we went from despair (‘Are we going to be able to meet at all?’) to celebrating the fact that because of their bold witness without being recognized, those students helped 27 other students either come to faith for the first time or decide as adults, ‘I’m going to give my allegiance to Jesus.’”

The next week, 15 more students came to Christ.

“Even though the administrators may deny us access to rooms like other student groups, our God’s sovereign,” Jao says.

InterVarsity recognizes that while things have changed, God is still opening doors, and the students can remain bold, joyful, and confident in their work.

InterVarsity is going back to the beginning. They’re using chapter-planting skills to connect with the students. They are learning how to connect on a spiritual level with other students without having official structures existing on campus.

One possibility is to multiply small groups. Students meeting in dorms because they have no other place to go can still invite Christians and non-Christians alike. They would love to see one small group multiply into three over the course of a year.

InterVarsity has to use innovative techniques in order to raise their profile without having official avenues like student activities fairs to work from. This includes using backpack banners, interactive art displays, and interactive conversation stations.

And perhaps the most important approach is to focus on the individual influence of each student Christian on campus. Jao explains that wherever the students go and whatever they are talking about, they need to learn how to graciously, winsomely, and naturally transition to a conversation about faith and invite people to get involved with InterVarsity.

And this isn’t such a bad thing. Jao says, “I think, most importantly, we’re mobilizing students to be missionaries. I’m convinced college students are there to be good students, absolutely, but also to be missionaries wherever they are.”

While getting derecognized isn’t exactly like getting kicked out of a country for spreading the Gospel, it does hinder that activity significantly. But it doesn’t mean InterVarsity and participants will give up.

Jao says, “So in part, our campus access challenge is actually forcing us, or inviting us, to fully release the ministry into the hands of college students to say the best way students are going to hear the Gospel is not by drawing them to a large group meeting–which we may or may not have access to–but in your dorm rooms, in your cafeterias, in your laboratories. How can you start conversations about faith, and how do you draw people into a group to study Scripture together?

Jao points out that when Christians were pushed out of the temple in Jerusalem, they moved to houses. And when that became unsafe, they operated in synagogues throughout the Roman Empire and eventually into the marketplaces.

“The Spirit of God is not attracted by having a room or having a building, but in fact the Holy Spirit will continue to propel God’s people into new places of witness,” Jao says.

The lessons these students are learning on campus right now because of campus access issues will pay off anywhere.

Along with the daily prayers list, Jao asks you to pray for InterVarsity as they meet literally thousands of new people all across the country in the first few weeks of school.

Pray for endurance and creativity for the students working to reach out these first few weeks.

And regarding first-year students Jao says, “Studies show us that 76% of them are looking for answers to their deepest spiritual questions.