Published by Greg Yoder on September 2, 2014 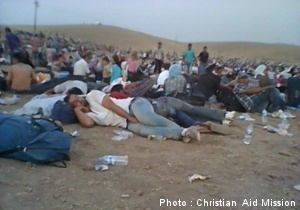 The displaced sleep out in the open in Syrian and Iraq, victims of ISIS terror.

Middle East (MNN) — While the world continues to watch ISIS with fear and concern, a ministry leader reports God is using it for His good. While many people use Romans 8:28 for comfort, it’s quite another to actually see it played out in people’s lives. That’s what’s happening in Syria and Iraq, as ISIS continues its reign of terror.

Steven VanValkenburg with Christian Aid Mission, your link to indigenous missions, says the terror that ISIS has inflicted has been incredible. “A lot of people are still lying out in the desert dead. A lot of people are still fleeing. There may be a couple hundred thousand in Erbil. And then, [there are] others throughout the whole Kurdistan area, so there may be a couple of million people who are displaced or refugees.”

National missionaries are doing everything they can to help those who were told by ISIS to convert to Islam or die. “They are displaced. They have no work. They left everything behind. The basic need would be food and water. The temperatures have been up to 120 degrees [Fahrenheit].”

There are spiritual needs, too. Many of those forced from their homes are being called Christians because they’re non-Muslims. VanValkenburg says many are “cultural Christians, and this is a real wake-up call for them spiritually, to search themselves in terms of what they really believe and if they really do trust in Christ.”

VanValkenburg says it’s a good time for those sharing Christ because hearts are ready to talk about spiritual things. Even Muslims are open. “There is no problem with trying to say, ‘There’s a problem with Islam.’ They know there’s a problem. They’ve seen all the fighting and stuff. They’re very open and interested in finding out ‘who is Jesus Christ, what does He mean to me?’”

So, is the situation tragic? VanValkenberg says yes, but “it’s a time when people’s spiritual antennae are up, and they’re very much listening and willing to hear. They’re very, very open to finding out what is an answer to the way they look at the world and deal with ‘my own walk with God.’”

While Christians are providing much-needed aid, Scripture, testimonies, and love come with that aid. It’s making a difference.

Through your generosity, Christian Aid Mission is providing funding for these programs in Iraq. While you may feel like your hands are tied, being thousands of miles away, you can make a difference with your financial support.