Greece (MNN) — Even though Greece has a long, rich history connected to the early Church, things haven’t exactly been easy for followers of Christ there.

In 1938, laws restricting freedom of religion were passed in Greece and have never been repealed. Unchallenged, the Greek Orthodox Church grew dominant (95% national affiliation). Proselytizing is illegal unless it is an attempt to convert a person to Greek Orthodoxy.

That also means that other religious groups like Protestants, Catholics, Evangelicals, etc. do not have the same standing in the law. AMG International President and CEO Tasos Ioannidis shares a good example of a challenge facing someone who wants to build a church: part of the law requires that anyone wishing to operate a place of worship must first obtain two permits: one from the Ministry of Education and Religious Affairs, and the other from the local bishop of the Greek Orthodox Church. Those permissions are rarely granted. As a result, it is hard to start churches.

Christians have been praying for change for decades. Ioannidis says God’s answer has been a big one. AMG’s Fotis Romeos first noted a proposal in his July report. Romeos co-founded the CosmoVision Center on the outskirts of Athens, Greece. He works with AMG’s Eastern European ministries and serves as the Greek representative at the European Evangelical Alliance and the general secretary of the Greek Evangelical Alliance.

Romeos wrote, “We are facing a new law, which is proposed by the Ministry of Religion in Greece regarding the legal status of evangelical churches in Greece. We have been literally fighting for many years for such a law and now the time arrived.”

Usually, when a ministry discusses new religion laws, it means more restriction. However, Ioannidis explains, “This new law removes a lot of the barriers that have existed over the years. It is not perfect, but it’s a big step forward from where Greece has been. We are praying that the law is approved and that implementation goes forward.”

According to Romeos, here’s what’s at stake: under the proposed law, “For the first time in our modern history our evangelical Bible-believing churches would have a legal status in Greece.” He goes on to say, “We just seek for more tools to advance the ministries of the Gospel in our needy country and region. I would like to ask you to keep praying for this matter.” This new law will give Gospel workers in Greece new opportunities to share the story of Jesus. 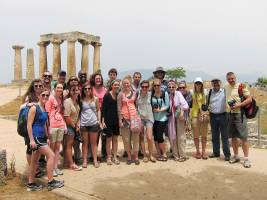 This brings us to the second issue: resources. Ioannidis explains, “The situation in Greece continues to be challenging. The economic crisis started in 2009, [and] we seem to have hit bottom in Greece. But even now, in the last quarter, Greece is still in recession.”

Unemployment is around 28%. The government is trying to stimulate economic growth, but it might not kick in until the latter part of the year.

Why does it matter? Ioannidis reminds us that Greece is an international entry point to Europe. “With everything that is happening in Syria and Iraq, there are a lot more refugees that are coming to Greece. There is a lot of need in the Athens area, and the churches are overwhelmed.”

Ioannidis noted the mandate behind the request in an earlier blog post:

“When Christians go to the nations with the message of the Gospel, our obedience is the natural overflow of the abundance of grace God has shown to us. In the same way, His material blessings are poured out in love to comfort those in need through giving. The Lord blesses us to be the instruments of His blessing to others.”

Churches have been stretched thin meeting needs since the fiscal crisis began. Now, there are more people who need help. Even a few dollars helps. If you can, click here if you can come alongside AMG International in Greece.