CAR’s Protestant leader says fighting is for access to resources 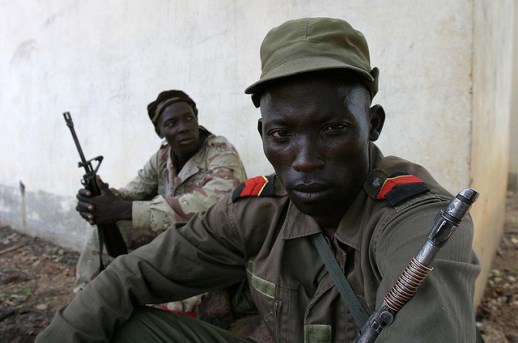 Nicolas Guerékoyamé-Gbangou says fighting between members of the disbanded Séléka rebel group and the
anti-balaka self-defense militias is not a battle between Muslims and Christians.
hdptcar / Flickr / Creative Commons

The man chosen to lead what he says is 51% of the population of the Central African Republic (CAR), its Protestants, says that the conflict in the country has nothing to do with religion.

Nicolas Guerékoyamé-Gbangou, a guest lecturer at London’s School of Oriental and African Studies (SOAS) this week, said that fighting between members of the disbanded Séléka rebel group and the anti-balaka (anti-machete) self-defence militias is not a battle between Muslims and Christians.

“There is no Christian militia and there is no Muslim militia as well… This conflict is not religious at all,” he said, explaining that the anti-balaka militias developed from local village self-defence groups originally formed against cattle rustlers and bandits. He added that around 90 per cent of Séléka was comprised of foreign nationals from neighbouring Chad and Sudan.

It has been widely reported in the media that the conflict has taken a clear religious tone, with the Séléka group referred to as an Islamist force bent on turning the country into an Islamic state, and the anti-balaka called a ‘Christian’ militia.

However, Guerékoyamé-Gbangou says the conflict is really a battle for control of the country’s resource-rich northeast.

“Most of our resources are concentrated in the northeast, in the region of [CAR’s former president] Michel Djotodia,” he said. “This is what led to the rebellion in the northeast. It has been neglected for decades. And [fighting over this region] started in the colonial period, so what does it have to do with Christianity or Islam? People want to exploit the natural resources, but don’t want to develop the region because, if it is developed, it would appeal to lots of people, and there would be more investors. [The leaders in the capital] prefer to leave the region like it is so that only the strong ones will have access to the resources.”

Guerékoyamé-Gbangou added that it would be wrong to consider the CAR to be split solely between Christians and Muslims.

“There aren’t just Christians and Muslims,” he said. “There are also animists, Buddhists and people from other religions as well. The conflict is not religious; it is political. Those who led the country did not share resources and wealth.”

After the lecture he was asked why, if CAR’s Christian comprise over 76% of the population (with, he says, 29% of them being Catholic, and the rest Protestant Evangelical), the country has all the seeds for a genocide, according to the Director of Operations for the UN Office for the Co-ordination of Humanitarian Affairs (UNOCHA).

In response, the Head of the Evangelical Alliance said most committed Christians have not been actively involved in politics in CAR for the past 20 years, and so have not been able to be influential in the governance of the country. He lamented that fact, saying that was why he himself is an active member of Parliament.