Congregants forced to meet in school; explosives found nearby 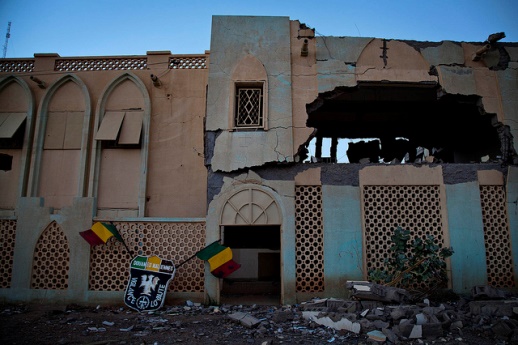 The city of Gao was left badly damaged during the conflict between Malian forces and the Tuareg-led Islamist group last year.
MINUSMA/Marco Dormino / Flickr / Creative Commons

Christians in a city in northern Mali, already forced to hold services in a school classroom because their church was looted and not ready to host meetings, had a bomb scare on Sunday (Jan. 14).

Military personnel patrolling the area in Gao on Sunday morning discovered explosives near the school. French army personnel were able to safely defuse the devices and authorities are now investigating, but the incident left church members shocked.

The pastor of the church, whose identity is being withheld to protect his security, told World Watch Monitor there is “insecurity in all aspects of life” at the moment, but that his congregation was refusing to panic.

“I cannot say for sure that the bomb was intended to hurt us Christians,” he said. “I only know that the location of the bomb was right next to our place of worship and also a route frequently used by the military.”

It is just over a year now since French troops ousted the Tuareg-led Islamist group, which had taken over northern Mali and declared independence, aiming to impose Islamic law on cities such as Gao.

On January 11 last year, French troops moved to regain control of the region after the Islamist militants had attempted to progress further south.

For nearly a year, the armed Islamist groups had ruled the region, banning the practice of other religions and desecrating and looting churches and other places of worship.

Thousands, including many Christians, fled the occupation and found refuge in the south of the country or in neighbouring countries such as Niger and Burkina Faso.

After the French helped the Malian forces to regain control of the region, the re-establishment of security took time and necessitated mass reconstruction, as many displaced people returned home.

A number of public buildings were destroyed during the conflict, including schools, health clinics, ancient monuments, hotels and restaurants.

The pastor of the church in Gao told World Watch Monitor that around 50 members of his congregation have returned home in recent months.

“We came back because we want to revive the testimony of Christ here in our hometown,” he said. “Despite the insecurity in all aspects of life, we want everyone to return here and together to work for our God who loves us so much.”

Mali fell from 7th to 33rd on the 2014 World Watch List, which ranks the 50 countries where practising Christianity is most fraught.

Following the French military intervention last year, “the threat of an Islamist takeover has been averted, at least temporarily”, reported this year’s World Watch List, which was compiled by Christian charity Open Doors International.

However, the list reports that the presence and infrastructure of Christianity in the north was largely destroyed, and that rebuilding a Christian presence will be difficult because many Christians who fled the north are afraid to return.

“Even though most Malian Christians (constituting less than 5% of the population) live in the south of the country, they feel threatened by Islamists in the north and fear of a new uprising remains,” reports the list.