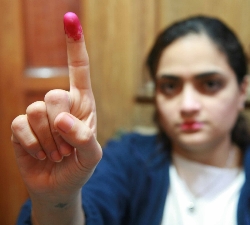 CAIRO, Egypt, January 15, 2014 (Morning Star News) – Across Egypt, Christians are lining up today and Thursday to vote on a new constitution that many consider highly flawed but the best option – and a substantial improvement over the last constitution drafted by Islamists.

The nation’s Christian leaders are urging the rank-and-file to vote in favor of the constitution to bring stability the country has lacked for the past three years, but detractors say the document maintains Christians’ second-class status in Egyptian society.

“I will vote tomorrow – I will vote yes, but I am not happy about it,” Issac Saleeb, a pharmacist and Coptic Christian in Cairo, said yesterday (Jan. 14). “[The constitution] means we are ruled by Islamic rules. Still, it’s very, very good compared to [ousted President Mohamed] Morsi’s.”

The biggest problem Saleeb and others see in the constitution is the way it renders Christians and other non-Muslims second-class citizens through Article Two, which establishes Islam as the state religion and sharia (Islamic law) as the  “principle source of legislation” for the country. Article One establishes Egypt as an Islamic state, albeit not one run by Islamists such as the Muslim Brotherhood, the now banned group backing Morsi. Both articles are relics from the constitution drafted under Morsi, as well as from the constitution in place when Hosni Mubarak was forced to step down from the presidency in 2011.

Some human rights activists agree with the criticism but take it a step further.

“Although the provisions regulating civil rights in the new draft constitution are better than those in the now suspended 2012 constitution, both in terms of their formulation and content, this relative improvement does not provide the necessary guarantees for the exercise of numerous rights and liberties addressed by the constitution,” officials from the Egyptian Initiative for Personal Rights (EIPR) said in press statement. “These shortcomings could have been avoided by conducting a serious, transparent social dialogue, but unfortunately such a dialogue was not part of the process of the Committee, particularly around provisions dealing with the status of the military establishment and official religious institutions and the scope of freedom of religion and belief.”

One of the biggest winners in the new constitution is the military and the nation’s internal security forces, according to EIPR. The Washington Institute for Near East Policy echoed the sentiment.

“The new draft grants broad autonomy to the security services, military, and other state institutions that participated in Morsi’s ouster,” the Washington Institute concluded. “For example, it establishes a Supreme Police Council, which must be consulted on all laws pertaining to the police (Article 207). And in addition to granting each judicial body ‘an independent budget’ and the autonomy to ‘administer its own affairs’ (Article 185), it empowers the Supreme Constitutional Court’s General Assembly to select the court’s leadership (Article 193). It also empowers the Supreme Judicial Council to appoint the government’s prosecutor-general (Article 189), an authority granted to the president under the previous constitution.”

The institute says the proposed constitution is “particularly generous toward the military,” lauding it as an historical pillar and, like the previous constitution, mandating that the defense minister be a military officer in Article 201. The draft also protects the military’s autonomy over its budgets by empowering a security-dominated National Defense Council to review them in Article 203 and allows civilians to be tried before military courts in Article 204.

“But the new charter goes even further,” the Washington Institute emphasizes, “requiring less legislative oversight for military trials, mandating that the defense minister can only be appointed with the approval of the Supreme Council of the Armed Forces during the next two presidential terms (Article 234), and empowering the state to fight ‘all types and forms of terrorism’ (Article 237) – a virtual carte blanche for the military in its ongoing crackdown against pro-Brotherhood forces.”

Christians in the country seem lined up behind the constitution; it is hard to find a Copt who says they will vote against it, even if they don’t support it. One reason for this, human rights activists said, is the perception that the country will otherwise continue its descent into chaos or revert to the rule of the Muslim Brotherhood or hard-line Salafis.

Another reason for the support, Saleeb said, is that the leader of the Coptic Orthodox Church, Pope Tawadros, has urged followers to vote in favor of it. Coptic priests around the country held meetings with parishioners to explain and promote the new constitution.

Such maneuvers rankle Copts like Saleeb who believe the government should be secular. The pope, priests and other clergy should not be dabbling in politics, he said; when they do, the Coptic population tends to walk in lock step without ever examining the issue at hand.

“We obey them because we think they know about politics,” Saleeb said.

Still, the constitution is an improvement over the one written under the Morsi administration. Gone is Article 44, the blasphemy statute that prohibited the “insult or abuse of all religious messengers and prophets.” Even though defaming a revealed religion was already punishable under Article 98 of Egypt’s penal code, persecution of Christians on trumped-up charges of blasphemy under the statute increased dramatically when Morsi was in office.

One of the most egregious cases against Christians was a charge against two Coptic children, Nabil Rizk, 10, and Mina Farag, 9, in October 2012 for allegedly tearing up a copy of the Koran. The two children were released to the custody of their parents after an investigation.

Also, in May 2013, Demiana Abdel-Nour, a Coptic Christian teacher, was accused of insulting Muhammad during a school lesson. Despite an overwhelming number of students who testified on her behalf, she was fined 100,000 Egyptian pounds (US$14,400). Her case is still under appeal.

Article 81 was stricken from the proposed constitution; it made all rights guaranteed in any of the articles subject to Islamic law, which essentially rendered those rights null and void. Also removed from the draft constitution was Article 219, which allowed some people to devise their own interpretation of Islam, which some human rights activists said could lead to hard-line Islamists using violence to oppose Christians.

The editor of the nation’s weekly Coptic newspaper, Watani, said that although the constitution under consideration is flawed, he supports it and has urged other Christians to do so in several editorials. Youssef Sidhom said the country cannot achieve everything in one step, pointing out that the best way to get rid of Article Two is to improve living standards so people will not cling to Islam to make up for failures in the economy. Egypt should eventually get rid of Article Two, he said, but not now.

“[It] is their shield in the hard times,” Sidhom said. “We have to raise the standard of living in order for people to believe in their country more than their religion, or at least equal to their belief. Not before then could you ask people to reconsider that a state has no religion.”