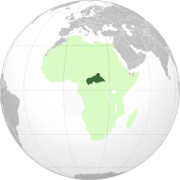 "It's really, in many cases, forgotten," says Jim Hocking of Integrated Community Development International (ICDI). "People don't keep up on the news; you have to actually go looking for it; it doesn't come to you."

A recent report from the International Federation for Human Rights shows Seleka rebels have killed at least 400 people since gaining control of the country in March. Rape and kidnappings are continuing, as well as the use of child soldiers.

The group, known by its French acronym FIDH, says rebels are committing human rights abuses against CAR civilians--abuses that could qualify as war crimes.

FIDH Africa Director and Researcher Marceau Sivieude told Voice of America that "civilians are living in 'total insecurity' with no one to protect them."

Hocking says most of the unrest is in the capital city of Bangui.

The situation involves "lots of insecurities; as they try to disarm some of the rebel groups, they're running into lots of problems," says Hocking.

"That adds to the insecurity when there are little fights that break out: shooting matches between those that are trying to disarm and those that [don't want] to give up their arms."

Turmoil has no sign of stopping, but ICDI and Living Water International are going full-steam ahead. Acting as Living Water's in-country representative for the CAR, ICDI provides continued sanitation training in villages that participate in its well-maintenance program.

"When they're on the road and a long distance from the capital city (or from any city), there is risk," Hocking explains. "They could come across rebels quite often and basically have to negotiate their way out."

He adds, "There's nothing really for the rebels to take from them, but it's risky. They could get into some difficult situations."

Pray for the safety of ICDI workers. Help them bring clean water and the Living Water of Christ to those in need.

"Continue to pray. Support organizations like [HCJB Global] and Living Water, who help us with funding to both maintain wells and drill wells," says Hocking.

ICDI runs a Christian radio station in the CAR with the help of HCJB Global. In March, looters took this station off the air.

See how the partners worked together to get "Radio ICDI" back on the air.