“Where will we hold worship services now?” asked a tearful Christian as a church with a congregation of more than 1,300 believers was demolished in China’s central province of Henan on orders of the authorities.

Tianmen Church was one of two “three-self” (i.e. state-registered) churches in Jianxi district knocked down within days of each other at the end of May. 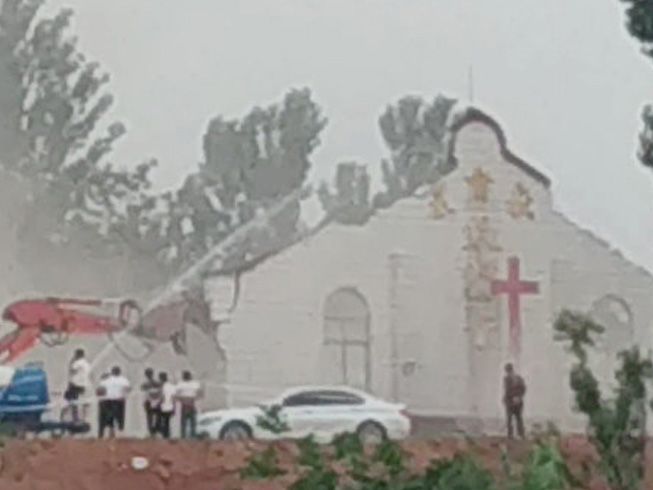 Authorities in China changed the route of a new canal to make sure the demolition of Tianmen Church went ahead [Image credit: Bitter Winter]

Tianmen’s church director received a “notice on the demolition of illegal constructions” on 28 May and appealed to the district’s Ethnic and Religious Affairs Bureau, explaining the church had all the required permits. His appeal failed and demolition crews arrived at 5 a.m. on 31 May to begin work.

“The state’s support to 'three-self' churches is nominal. They only want to control, shut or demolish them, while lying to everyone about religious liberties in China,” said a congregation member in his 70s.

Chinese officials said Tianmen Church stood in the way of the construction of a new canal and road, a claim disputed by a local man. He said, “They could have avoided the demolition, but a deviation for the canal was made on purpose, to make sure that the church had to be demolished.”

Bethel Church in Jianxi district was demolished at 10 p.m. on 28 May on the pretext of “road construction”. A congregation member said, “After the coronavirus lockdown had been lifted … we were expecting the church to reopen for services. But it was demolished instead. This is forcing us, believers, to a dead end.”

The nationwide crackdown on the Church by authorities in China has seen growing evidence that the state is taking administrative control of churches. Increasingly repressive measures have included the closure of hundreds of “house churches” (i.e. unregistered congregations) and “three-self” churches, thousands of arrests and detentions, imprisonment of pastors and forced installation of surveillance cameras inside some churches.