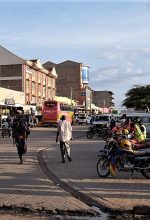 “They began hitting me with sticks and a blunt object, which injured my back and my right hand,” Fozia told Morning Star News. “There I fainted for five hours and regained consciousness at the hospital.”

She was hospitalized for two days.

“At the moment I am having nose bleeding, and all my body still hurts,” she said.

The siblings had gone outside their home to try to restore water supply at about 7 p.m. when the assailants approached, Fozia said.

“There were noisy shouts calling us infidels,” she told Morning Star News. “They said, ‘We know you do not belong to us. We have got hold of you today – we have no mercy on you people. You need to return to where you came from.”

Asha said her brother sustained injuries to his hand and ribs from a blunt object, she said.

“The attackers injured me by hitting my head against the wall,” Asha told Morning Star News. “My two front teeth got broken, and the attack caused the left side of my body to swell, but I managed to escape, leaving my sister in an unconscious state.”

Asha and her brother looked for a taxi and took their unconscious sister to the hospital, she said.

About four months after the family left Nairobi and resettled in Isiolo, about 170 miles north of the Kenyan capital, area Muslims began harassing the family, Fozia said.

“Muslims started questioning us why we were not attending Friday worship at the mosque,” she said. “This interrogation continued for several months.”

After obtaining a medical report, on June 6 she reported the assault to police, who arrested two suspects the next day. Identified only as Jarson and Musambir Adullai, the two suspects were released on bond of 20,000 Kenyan shillings (US$185) on June 8, she said. A hearing is set for July 27.

Their mother said the family has been receiving threats.

“We are receiving threats that my children should withdraw the case from police if we are to remain safe,” the widowed mother (name withheld) told Morning Star News. “But we demand compensation for my three ailing children and medication for them. Three weeks have now gone by, and my children are constantly on pain killers.”

She said they have been running for their lives from Muslims of Somali descent who have attacked them for nearly 10 years.

“Please, we need prayers that we shall receive justice,” she told Morning Star News by phone.

Having fled Somalia more than 16 years ago after the death of her husband, she has eight children – two from remarriage, though her second husband recanted his Christian faith amid a wave of persecution and returned to Somalia in 2010.

In 2016 Somali Muslims attacked another of her adult sons, beating him unconscious. Muslim Somalis in Nairobi had seriously injured the same son on Oct. 27, 2011, after they learned that family members had become Christian. The Somali neighbors hit him with a metal bar on his forehead and face, and he lost two teeth and sustained knife wounds to his hand. They left him for dead.

Her family has suffered various attacks since embracing Christ. After she filed a police complaint about an attack by Somali Muslims in Kenya in 2014, no fewer than 10 Islamic elders visited her to warn that she was risking her life by doing so.

Somalis generally believe all Somalis are Muslims by birth and that any Somali who becomes a Christian can be charged with apostasy, punishable by death. Somalia’s constitution establishes Islam as the state religion and prohibits the propagation of any other religion, according to the U.S. State Department. It also requires that laws comply with sharia (Islamic law) principles, with no exceptions in application for non-Muslims.

Kenya is ranked 44th on Christian support group Open Doors’ 2020 World Watch List of the 50 countries where it is most difficult to be a Christian; Somalia is ranked 3rd .